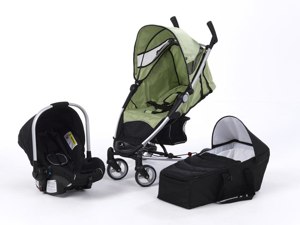 Kat writesâ€¦When looking for a pram/pushchair which will take you from birth to toddlerhood and beyond, there are countless travel system options on the market.Â  Often they are a compromise between the two functions and don’t give you the best but the averageÂ of both worlds.Â  When you factor in the cost at around Â£250 – Â£300 without the car seat and accessories, they soon become an expensive purchase if you later abandon them in favour of a lightweight stroller.

The Petite Star Zia4 is a 3-in-1 travel system with a difference because it includes a lightweight stroller and it’s excellent value making it great on a budget.

When I was sent one for testing, I was initially skeptical because I’d been an original purchaser of a 2-in-1 pramette system and quickly found it to be completely wrong for us. I wasn’t alone with many friends ending up buying a second [lightweight] pushchair. I wondered whether there really could be a system which made it easy to use for both a newborn and a toddler whilst being lightweight.Â  Within hours of opening the box I am pleased to report that the answer was a resounding YES.

The Testers: This has been tested extensively by ToddlerGeek (18 months old), a couple of her toddler mates (18 months – 2.5 years) and a beautiful two week old baby.

Appearance: We have the lime version of the Zia4 (above) and like the colour injection especially in these dark winter days. It also comes in ‘moonstone’ (black). The frame and shape are probably most similar to the Quinny Zapp, whilst the seat is made from canvas as you would find in a Phil & Teds.Â  It weighs in at 8kg which is a tad heavier than the Maclaren strollers or Mamas and Papas Nipi but when compared to travel systems, it’s super light.

Instructions & Set up: Both were what you want – simple and easy to follow.

In Use: The folding system (like with every pushchair) has its own knack – once you know how, it’s the work of 4 seconds to collapse and stow the pushchair.

It’s simple to put the car seat on the pushchair and also to fit it into the car, which means it’s great for quick dashes and you don’t need to worry about being unable to fit the car seat safely and correctly every time in the car.

The cocoon for the pram was one of my big question marks before I used it because the first major failing of my travel system was that it couldn’t be collapsed for the bus without removing the liner and mattress – whilst doing this there was nowhere to put the baby! The Zia4, however, gets around this as the cocoon clips on and off as one piece so on the bus, I could remove the cocoon with baby sleeping peacefully and fold the pushchair and vice versa at the other end. This is brilliant for visiting friends as it doubles as a carrycot.

The raincover may not be the quickest I’ve used but it was far from being the trickiest.

It’s brilliant as both a pram and a pushchair. For the pram, between the easy fitting of the cocoon which is really roomy and comfy, (even ToddlerGeek can just about fit in it at 18 months plus it will comfortably fit the chubbiest of cherubs) and includes a a harness to keep them safe, sturdy handles for lifting, and fits into your car leaving plenty of room for your shopping.

The Zia4 is a brilliant lightweight pushchair. The seat is higher than most lightweight pushchairs which ToddlerGeek (the shorty) loved as she wasn’t lost amongst the shins of other shoppers.Â  Being higher also meant it was easier for us to talk to each other.Â  The seat reclines using a stap so it has many positions between nearly flat and upright.Â  When your baby/toddler is flat the motion of the pushchair makes it rock gently which helps them drift off to sleep.

In general, the frame has quite a bit of ‘bounce’ as it is lightweight aluminium, which helps prevent a bumpy ride on uneven ground and my daughter found it entertaining when I bounced her.Â  The wheels are small so you need to tip it a little for curbs and the only time it struggled was on some seriously uneven cobbles but ours wasn’t the only pushchair which found those difficult.Â  As the front wheels are close together it handles corners easily.

It has two handles rather than a bar which I don’t tend to like BUT you can push it one handed which is very unusual for a two handle pushchair. It folds into a very compact 74 x 36 x 40 cm (with wheels – they can also be removed) and takes up no space at all.Â  If you are short on storage in the home or if you have a small boot like a Figaro or Ka then this is the perfect stroller for you as unlike umbrella style fold-ups, you can stow this in a small corner without it taking over.Â  You can even buy a carry bag (see below) to either keep the dirt contained or protect the pushchair when you take it on flights.

The shopping basket is not massive but if you pack it well it fits a surprising amount in, and having handles means you can hang bags on the back (being careful of the dreaded tippage of course!).Â  The brake is operated with one foot and easy to apply.

Any negatives: No major drawbacks. It would fall down on serious ‘off road’ use but even the Zia4 can’t tick every single box!

Overall: If you are looking for something which genuinely goes from birth to toddler without compromising on the major features needed at each stage then this has to be a contender.Â  It is lightweight, easy to use, attractive, functional and, if all that weren’t enough, it is a serious budget buy.

Other Reviews: Don’t jut take my word for it, check out the reviews it has received from the ladies of Mumsnet where it has achieved an overall score of 9/10 and a Mumsnet Best tag. It has also netted itself a Prima Baby & Pregnancy Best Buy Award.

Don’t forget that you can see other pushchairs and prams we’ve featured in The Pushchair Track.