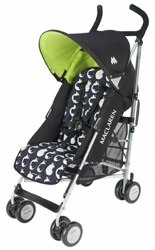 If you’re someone who has owned a heavier travel system (we have the Quinny Buzz), then you may be like the legions of parents who invested in a second lightweight pushchair stroller. We owned (we just gifted it on) a Mamas and Papas Nipi, and we have just spent the past six weeks road testing the Maclaren Quest Mod in the Big Apple design.

The Testers: Moi heavily pregnant and quite petite, ‘the bambino’ now 21 months, my mum, and the boyf who’s quite tall and fussy about what he pushes. We live on a short, but rather steep hill.

Appearance: If I was ever going to own a Maclaren, it was of course going to have to be one that looked different from the gazillions that you see when you’re out and about. I love the zingy, monochrome, Andy Warhol inspired ‘Apple Print’ motif. It has a high quality, polished off look which is partly down to the aeronautical quality aluminium frame. It’s available in two other colourways – a coffee exterior with powder pink, raspberry, and sunshine for the interior, or a charcoal exterior, and sky blue and orange for the interior.

Instructions & Set Up: I would say there’s something a little assumptive with Maclaren’s as they’re light on instructions although they aren’t exactly mind boggling to set up and they’re pretty much ready to roll out of the box.

In Use: It weighs in at an impressive and super lightweight 5.5kg and I’ve really appreciated this whilst being heavily pregnant and out and about with a toddler. Easy to push along, I didn’t feel like I had to put a lot of effort into it on level terrain. It goes up curbs quite smoothly, is nifty and manoeuvrable, and is fairly comfortable on the wrists with its ergonomic handles – regular readers will know I prefer a handlebar as I’m not into RSI (repetitive strain injury). Pushing up hill though, is hard work, pregnant or not, as my mum who’s very athletic started making a lot of noise about potential heart attacks. No pushchair is a doddle uphill but travel systems on this factor have the edge on lightweights as they have much more built in suspension.

It’s been on train journeys, up and down escalators at tube stations, and hefted up and down the stairs by very nice men who offered to assist me out of Oxford Circus, plus my mum. It’s generally good on steps and less inclined to catch on smaller, shorter depth ones, plus it’s a one-hand fold pushchair but it does take a little practice as like every pushchair, it has it’s own knack. It’s a bit sensitive, as you pretty much can’t leave anything other than the neatly folded raincover in the very decent sized shopping basket when it’s time to fold it down.

It’s got a carry handle on the side and light to carry up stairs (we have steps leading into our house) and there’s also a carry strap which the boyf really liked, which is not only handy for travelling but also for hanging it up under the stairs for instance. The raincovers really straightforward to put on – no faffing. There’s also an extendable footrest, the seat is really well padded, the hood has a storage pocket, and it’s got reflective accents for nightime safety. It’s suitable from 3 months to 3 years with a useful 4 position recline.

Any negatives? It’s so light that if you have your handbag on the handle and you take out your child, it’ll tip over. It can also have it’s quirky moments with the brake although admittedly this seems to happens with all pushchairs. Hard going on hills, naturally these aren’t suitable for offroad use either, but hey, which lightweight pushchair is?!

Price: RRP is Â£150 and it comes with Maclaren’s Sovereign Lifetime Warrant making it excellent value. Kiddicare have the pea green pictured and coffee brown for Â£127.50. The charcoal colourway is at Baby&Co for Â£149.99 although we have no experience of purchasing from this store, so do clarify that the item is in stock and ready for delivery before you order!

Overall: A feature rich, super stylish, lightweight buy that ensures you stand out from the crowd, and with a peace of mind lifetime warranty too. If you want something that’s adaptable for general, every day use that will also serve you well on holidays and when you’re travelling, look no further.

You can see all the pushchairs that have been featured so far in The Pushchair Track and also check out our guide to buying a stylish pushchair.