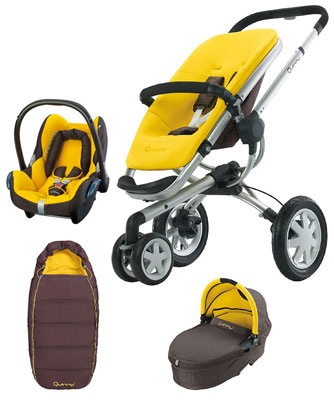 I have to say, even though I’ve had my moments where this pushchair has wound me up, I still do love the Quinny Buzz 3 (I own one) and with new colours and a limited edition, the love is still strong as it’s getting an injection of newness!

Weighing in at 12kg, this is one of the heavier travel systems and pushchairs on the market. That said, it is an absolute delight to push…just a bit much to lift sometimes when you’re a titch like me… It also opens up so simply that even after owning it for 18 months, it still has the power to wow on that alone.

The Quinny Buzz 3, in terms of style, which has been imitated in some respects by others, it’s another pushchair that really revolutionised the market.

Aesthetically, it’s beautifully designed, with a slightly futuristic look and the oh so loud colours, plus the quirky, unusual frame. It features an ergonomic front or rear facing seat, gas fold technology that creates one touch opening and smooth (ish) fold, all round suspension, big robust pneumatic tyres on the back wheels with a very nippy swivel wheel on the front, quick release wheels, a height adjustable handle, footbrake (like stop and go), and the option to make it a 3 in 1 travel system by putting the Maxi Cosi Cabriofix car seat or their fab Dreami carrycots on it to make it a pram. The shopping basket isn’t the biggest although I manage to cram a lot on!

It didn’t transpire until I was bewildered by the weird lack of space and the too short straps, that there was actually replacement straps and a seat cushion which is supposed to be used from 18 months. You’re likely to need these sooner because we noticed the problem from when she was around 8 or 9 months but they the straps are rectified on 2008 models and the replacement seat is included.

It can be a bit quirky on occasion with folding down but this is totally outweighed by the way it opens up – this is a feature that really does make life easier. The adaptors for the car seat/carrycot also have their quirky moments and I wouldn’t quite describe it is as ‘click on, click off’ at these times.

It does ride like a dream though (smooth pushing and you don’t feel the ground like you do with lighter pushchairs) and it’s surprisingly manoeuvrable considering its weight, although as you would expect with many travel systems, not great on stairs.

RRP wise, it’s Â£420 with the carrycot or Â£609.99 with carrycot and the Maxi Cosi Cabriofix car seat. It comes with sun canopy/hood, a little black buzz bag, and rain cover and the carrycot comes with covers too. Weirdly, the shopping basket is extra and like a lot of travel systems, there are a host of extras that you can buy like footmuffs and parasols.

Ideal for: The suburbs where you’re not overdoing it with public transport or trying to do too much offroad stuff.

Bang for your style buck: There’s a lot of bang for your style buck but like Bugaboo Chameleon’s, there are a lot of these on the streets reducing their impact a bit. The new colours will certainly inject some excitement, plus there’s the Henrik Vibskov collaboration, but what they definitely need to do is choose some key partners for customisation like the way Bugaboo worked with Small Paul by Paul Frank on their tailored fabrics, footmuffs and blankets.

Weight range: Heavy. It is one of the heavier pushchairs although not the heaviest by any stretch.

Don’t forget that you can see other pushchairs and prams we’ve featured in our new feature The Pushchair Track.