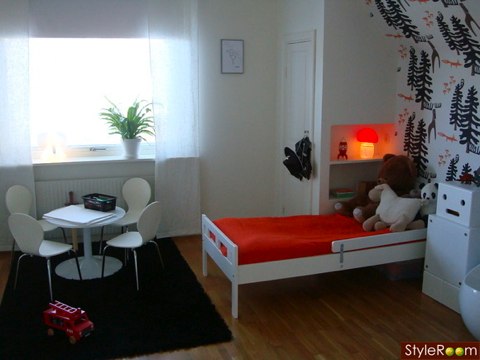 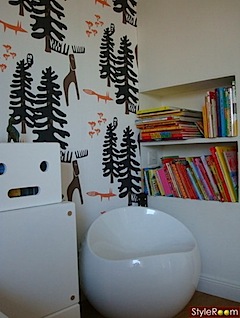 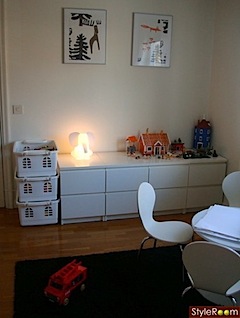 When south London interior designer Tina Moore created her now four year old son’s living space, she had her heart set on a “spacious play area with a modern twist” that was inspired by her sons love of the outdoors. Meeting the brief and then some, what’s resulted is a cool, airy space full of covetable pieces with that distinct Swedish simple-chic that they do so effortlessly. Using white as her canvas to build on, the room has evolved over time rather than being strictly designed, with hotspots of colour and fun around the room. Rather than do overkill on the outdoors ‘theme’ she’s chosen a few areas to accentuate it with the details. 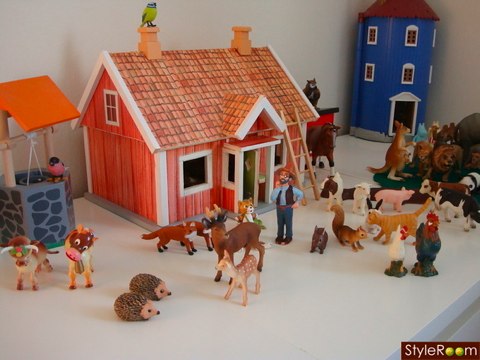 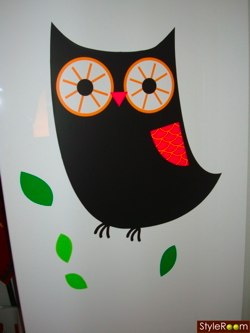 Most of the furniture was brought from Swedish site Barnvanligt – the robot bedside cabinet is a hot piece. It cost in the region of Â£60 and they deliver to the UK for around Â£20 and you can email them about arranging to buy it. The site is currently in Swedish although trusty ‘ole Google meant that I used their translator to paste in text from the descriptions – they will be putting up an English version soon!
She also purchased the farmhouse and animals, the owl print (around Â£18), and Ramin Razani’s elephant light (around Â£58) from Barnvanlight. For vintage toys, raid your local charity store or get hunting on ebay if you’d like to have toys just like how we used to have them in our youth. You can get a similar toadstool light from Little Baby Company like the ones featured here by Heico.
The table is from another Swedish store, R.O.O.M in Stockholm and the chairs are by mega Swedish furniture brand Mio. If anyone knows of where a similar table can be purchased from in the UK, please let us know! Round table wise, we’ve found a couple with four legs at Ikea, Â£29 and Kids’ Rooms, Â£44. A similar chair is the Junior Bunny Chair, Â£44 each.
The fab-u-lous wallpaper is another Swedish buy from Beckers Nya Hem who apparently can be emailed on infoATbeckersnyahem.se if you want the same one. Otherwise hotspots for children’s wallpaper include Mini Moderns, Cloudberry Living where they sell Ferm Living, and Isak, or you can go down the wall sticker/decal route. Check out previous posts for inspiration. Tina’s used leftover pieces of the wallpaper to make up the framed pictures on the wall which is a clever way of creating artwork on a budget.
The Kritter bed is a bargain buy (as usual) from Ikea at a cheeky Â£59 including the guard rail and the ball chair by Finn Stone can be bought from Bodie & Fou for Â£140. Tina’s cleverly put four of the two drawer Malm chests of drawers from Ikea together, Â£25 each, to make some low storage that can also be used as display and play surfaces.
He’s one lucky boy with a big bedroom like this!
[Image credit – Styleroom]