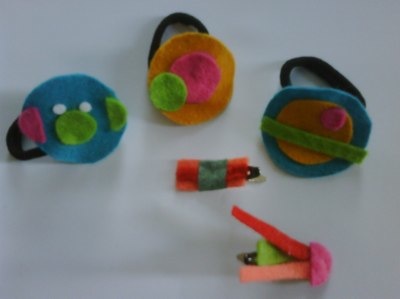 I admit – In the haze of settling in with a newborn, by the time I actually started thinking properly about what we were going to put in the party bags for the bambino’s 2nd birthday, it was the day before and the boyf and I were running around Kingston-Upon-Thames as if it was a challenge in the Crystal Maze..that we failed. In the end we had to accept that 1) fillers for under three’s are difficult to pin down and 2) it’s not cheap to fill a party bag these days! Jaysus, when I was a kid you were lucky if you got penny sweets, some bubbles, and a paper hat!

Anyway, after initial panic, the resourceful part of me kicked in and I remembered all the felt I had, some hairbands, and some clips and decided to make some for the party bags.

Time Needed – 30 minutes to an hour depending on how many you make but it takes no more than 10 minutes to make one.

You need: PVA glue, felt (ebay is great for packs of squares), some hairbands and/or hair clips. 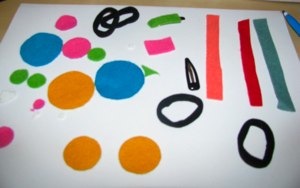 I kept it simple and used a circle stencil I own but you there are plenty of things around the house that you can draw around. I used a fadeaway pen to draw the circles but even if you used a pen, they won’t be seen.

I handstitched the largest circle to the hairband and then glued on the circles and shazam, you have a hairband. When you were in my situation where I had about an hour on the day of the party to do these, it was best to keep it simple with shapes and play with colour! Naturally, if you have lots of time, the sky is the limit and you can get a lot more creative. You can also skip the PVA glue bit and hand stitch or get the sewing machine out.

The clips are super quick to do – I recommend pushing the clip out before you put the glue on.

Hot Tip – Don’t use very small detailed pieces to glue as they’re tricky to control and you get a lot of glue on your fingers!