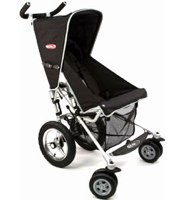 So I’ve been thinking about buying a new pushchair and selling my Quinny Buzz and Mamas and Papas Nipi. It’s been an ongoing deliberation for a while and if I do get a new pushchair, it would be a toss up between this and the Bugaboo Bee.

The Micralite Fastfold was actually our second choice when we originally shopped around. My old boss loves them and Which? (consumer magazine and renowned product tester) consistently rate this as the best pushchair. What held us back originally? It seemed really, really small and I just couldn’t imagine the boyf pushing it.

So what do I like about it now? Great price, one handed fold, one handed pushing, pretty light 6.8kg, decent underseat storage, pneumatic wheels so I don’t have to feel everything in the ground, you can put a carrycot on it, and I could (when I deign the bambino with a brother or sister), put my Maxi Cosi 0+ carseat on it. Oh and it looks good and whilst it’s not as sexy as the Bugaboo Bee, the price certainly makes up for that.

I see RRP’s listed between Â£150-Â£170 but I have confirmed with Micralite that the RRP is Â£150 and Baby’s Mart are currently the cheapest at Â£134.99. Best place for a demo (in my opinion) unless you have a local baby store, is John Lewis.