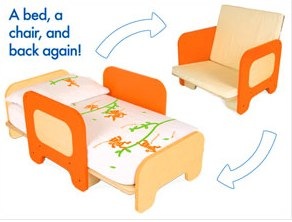 For a couple of months now, I’ve been quietly obsessing about unbelievably well priced US kids furniture brand, P’kolino. I emailed a couple of US stores that shall remain nameless wanting to know shipping costs (shush the boyf doesn’t know about this) and but they never emailed me back!It was their toddler bed that initially got me all excited. It’s so cool, it actually converts into an armchair! And it’s $189! Even with the shift in the exchange rate (it’s not quite bargain central on the ‘ole US dollar anymore…), for this level of style, that’s fantastic. 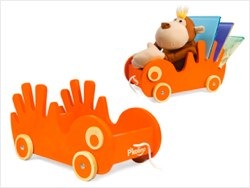 When I was over at Oz blog, Babyology yesterday, I saw the Book Buggee and it tipped me over the edge to email P’kolino direct. It’s $44.99! 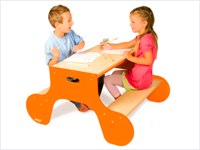 Now, they do ship to the UK although they tend to wait for enough orders for a shipment to be sent over. Depending on what you buy, shipping costs are likely to be somewhere between $50 to $200. However, they also advised me that the P’kolino range will be on sale in the UK next year but they wouldn’t say who and I don’t have a timeline…yet. Merciful hour! I don’t know if I’ll be waiting that long to snap up some goodies though…. Like the craft table on the left which is $129! They have so much stuff that I’m lusting after, I’m in palpitation central!

As an aside, when I mentioned the impending arrival of P’kolino to Kat yesterday, she was equally as excited so we reckon it’s a pregnancy thing that has us feverish for kids furniture! Now all we have to do is hope and pray that they won’t bump up the price too much when they come to the UK….