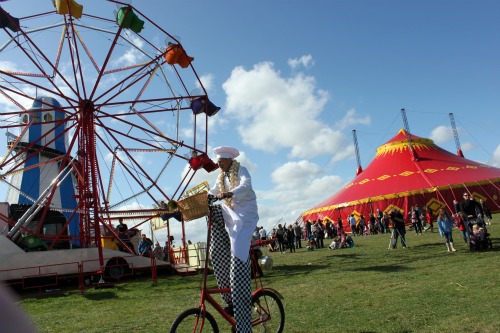 Following two successful Harvest festivals at Jimmy’s this year saw the first Alex James Presents Harvest. A mix of musical, foodie and family entertainment it offers something a little bit different from your average summer festival.

Held over three days on 9 – 11th September 2011 the festival featured performances from The Kooks, Athlete and The Feeling alongside cookery demonstrations from Yottam Ottolenghi, Rachel Allen and Hugh-Fearnley-Whittingstall. We went along for a day out and a nosey on the Sunday. 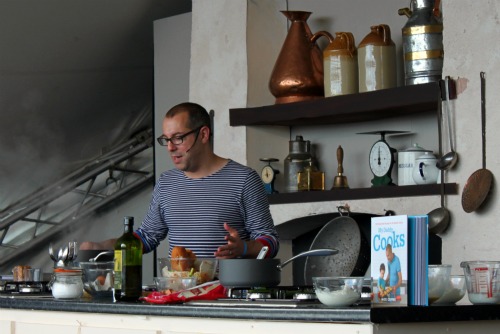 We started the day at the food stage where we caught friend of the site Nick Coffer aka My Daddy Cooks who was cooking some family-friendly recipes from his cook book. The children were absolutely glued to the stage not least because Nick’s son was cooking alongside him. There was a sizable crowd at the food stage the whole day and I was a bit gutted we had to leave before the headliners came on.

The food offering at the festival was good with pop-ups from Hix, Salt Yard and Wahaca opposite the local pubs and a whole range of catering vans. Pricing seemed to be a festival standard of around Â£6 a portion although we did find Adam Henson (the farmer from Countryfile) selling sausages for Â£3.50 which went down very well. There were food stalls aplenty and we were offered heaps of samples which was much appreciated by our children – especially the big tub of Yeo Valley Organic yoghurt (you’d think we never fed them). Alex James himself had a tent for his cheese and could be seen chatting to happy festival goers in his Barbour jacket. I enjoyed the food stands and would have liked to have spent more time browsing. 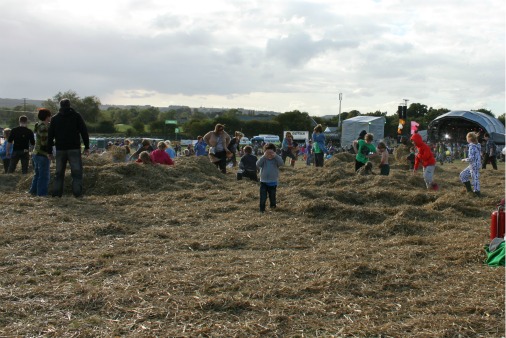 With a gang of nine children aged 6 months to 6 years between us we spent the afternoon at Little Harvest, the children’s section of the festival. As you can see in the top photo there were fairground rides, roaming entertainers, small activity tents and a big top which housed the children’s headliners Charlie and Lola.

Having read Natalie’s review we had it top of our list for the day as did every other family. As happened at Lollibop there were long queues for a limited capacity resulting in disappointment. I think that all family festival organisers should take note: if you bill something as your headline children’s act every child attending needs to be able to see it so either increase showings or increase capacity.

As some of you may know, as we were going into the tent we managed to lose Monty. To say it was hideous is an understatement and I wasn’t happy with the action from security or the lost child procedures at the festival. I have since spoken to the festival director who was concerned that it wasn’t up to scratch. I am pleased to say that they have learned from our misfortune and will be creating tight procedures for next year’s event. I am confident that next year they will have measures in place which help find and reunite children in the quickest time possible.

We also caught Opera Holland Park’s performance of Fantastic Mr Fox which was a refreshingly unusual act to find at a festival. It suffered a little from the strong winds but we enjoyed it and I shall review it fully in the next couple of weeks. 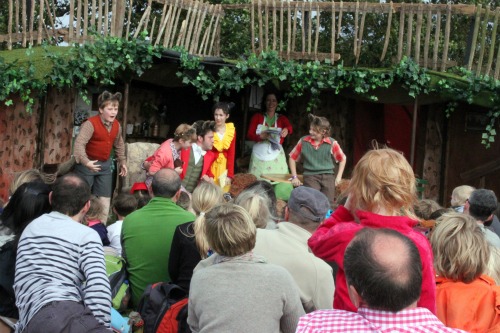 I found the atmosphere at Alex James Presents Harvest really relaxed and would definitely like to spend a weekend there next year. The site is exposed but well spaced so you don’t feel like you’re constantly in a crowd. There are fun touches everywhere and we loved the hay bale maze which by Sunday was a big pile of hay – a fantastic way to entertain the children while you caught some music. The facilities were plentiful, clean and well stocked for sanitiser and loo roll from what I saw.

If you’re after a long day out or a weekend of camping and entertainment Alex James Presents Harvest is a hot spot. Not too small and not too big, this festival is just right for those who don’t want to be lost in the crowds but still want some big names on the bill.