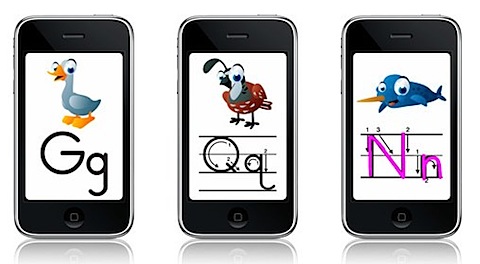 After recently featuring the Peekaboo Farm and Peekaboo Wild app’s, I got tipped off by BG reader Zoe about ABC Animals by Critical Matters.

“Our 2 year old loves ABC Animals (not to be confused with any that have phonics in the title) by Critical Matter. Really enticing graphics, speaks the letter with an animal and makes the animal sound. The best bit, is a double tap turns the card over and allows them to practice writing the letter. Brilliant. Obviously with the 2 year old it is more and excuse to scribble on the phone!”

The bambino, who seems to think that both of her parents iPhones belong to her, also took an instant liking to this app for pretty much the same reasons. The big eyed animals are adorable including a couple of quirky choices like ‘vampire bat’ and ‘unicorn’, with some of the animals changing on their next turn to keep it fresh and interesting. It’s intuitively designed so that they can scroll between cards and has great appeal for both younger and older toddlers – we likey this a lot!

Â£1.19 and also available for the iPod Touch.

If you can recommend any cool iPhone apps, drop us a line on features AT bambinogoodies DOT co DOT uk.

« Make Your Own: Roll Up Kitchen Playmat
The Biodegradable BecoPotty »