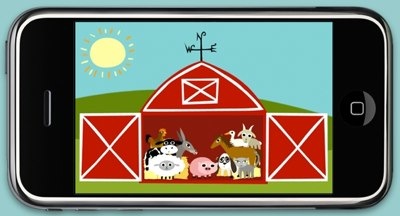 We’ve come to accept that the bambino is gadget obsessed and after catching the boyf and I playing Monkey Ball and demanding to play with the monkey’s each time she sees our phones, I succumbed and downloaded Peekaboo Farm after reading about it over on Babyccino Kids.

Aimed at young toddlers, it’s a whimsy educational barn adventure of peekaboo. Illustrated like a gorgeous storybook, the illustrations are by Divva Srinivasan, a regular contributor to the New Yorker. The barn does a little shake which intuitively invites your toddler to press it to open the barn doors and reveal an animal who makes their sound and a child’s voice says the animals name (you have the choice of English or Spanish), and combined with the animal name on the screen, these promote early literacy skills.

The bambino loves it (we’ll definitely use it whilst out and about) and has added in her own bit by also saying goodbye to each animal as they exit the screen and I’ve since downloaded Peekaboo Wild (jungle friends version). They’re Â£1.19 each and you can try out Peekaboo Farm Lite for free although there’s only three animals on it. A hit with the bambino, Peekaboo Farm charms with cool graphics and a strong educational ethos. I hope they add some more animals to it and maybe they’ll do one on sea life or birds.

If you can recommend any cool iPhone apps, drop us a line on features AT bambinogoodies DOT co DOT uk.