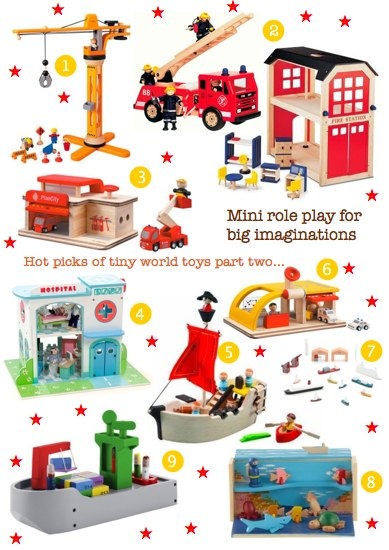 There are so many tiny world delights out there, we want them all! Following on from part one yesterday, we bring you delights from the best in tiny world toys – Plan Toys, Pintoy, Habitat, Le Toy Van and Muji. From fighting fire, to tending to patients, to sailing the big seas or hanging with the sea creatures, here are our favourite buys starting from Â£8.95…

1. Babipur Just in case you haven’t realised it yet, we absolutely love ethical toy maker Plan Toys whose wooden delights made from sustainable rubberwood with non toxic decoration, feature heavily throughout our toy guides. This crane moves in every direction and has bucket jaws on the end of it for grabbing and lifting, which in itself is lots of fun. It comes with traffic cones, a cement mixer, a construction worker and crane operator, barriers, and a men at work sign. Quite frankly the height of cool and you’ll probably get sucked into playing with it yourself! Â£31.99 (RRP Â£42.99)Babipur

2. Pintoy Fire Service Collection Being fascinated with the fire service is a curiosity a lot of young children have and this collection designed by John Crane for Pintoy is a really well detailed, high quality eco-friendly buy. There’s the fire station with furniture and accessories including bunkbeds, lockers, control panel and desk, plus there’s the fire engine that can fit inside it which has an extending and rotating ladder, removable hose and sides that open out for more storage, plus there’s the set of firemen. Starts from Â£54.98 for the station, with bundle deals available. Try Little Fish Toys

3. Plan City Fire Station Push the bell on top of this fire station to sound the alert that there’s a fire. Another eco friendly buy, it comes with a large fire engine with hydraulic platform plus a smaller emergency vehicle, plus a little figure to go with it. Age 3+ Â£18.99 (RRP Â£24.99) 3 Wishes Toys

4. Hospital by Le Toy Van Handpainted, designed in the UK, and made from high quality MDF and rubberwood, your little one can become immersed in the mini world of hectic life at the hospital. Featuring lots of openings for easy access, a wind up lift, bed with removable linen, nurses station with computer, medicine trolley, and bottles, privacy screen, and x-ray stand. Starts from Â£50 for the hospital and accessories, people and ambulance separate. GLTC have a bundle offer of Â£85, saving Â£9.

5. Plan Toys Pirate Ship Arrgh! There’s a lot of kids out there obsessed with pirates and this eco friendly hotbed of adventure features barrels, cannons, an anchor, sails, treasure chests, flags, crew members and captain, as well as a raft should it all go wrong and someone ends up in the sea, although they should watch out for the alligator. There’s a gangway at the back so that cargo can be put in the storeroom which also doubles as a jail for captives. Age 3 + Amazon

6. Babipur Another brilliant value eco friendly buy, this features a control centre with helipad, ambulance, rescue car and little man to oversee everything. Loving the spring loaded launch system that’s behind the garage system which shoots the ambulance into action for some fast paced drama. Â£19.99 Babipur

7. Port In a Bag We featured the airport version of this in part one of our tiny world guide and this port version has all the mini versions to create adventures at high seas. All of the wood toys at Muji are made from FSC certified wood. Age 3 + Â£9.95 Muji Get 20% off – see our post on the Elle Decoration offer.

8. Under the Sea In a Box We can’t get enough of Muji and they’ve upped the ante on their wooden toy in a bag collection with a new series ‘in a box’ which includes this Under the Sea version which has various fish, an octopus, squid, shark, and a scuba diver. There’s also a North Pole and Safari option. Age 3 + Â£8.95 Muji Get 20% off – see our post on the Elle Decoration offer.

9. ‘Marine’ Cargo Ship Habitat are brilliant at chic toys and this nautical delight with its little peg people is made from painted juniper wood and birch with scales for weighing the little blocks of cargo. Suitable for all ages with supervision. Â£29 in store and online at Habitat

Have you seen part one of this feature on tiny world toys? Also check out other guides so far: Bambino Goodies Christmas Gift Guide for Play Houses, Ride On Toys, blocks for babies and toddlers., and tea sets.