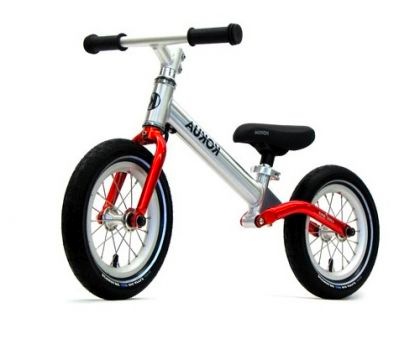 Kat’s daughter Milla has been trying out the LIKEaBIKE Mini balance bike for the past few months while Saria has got the aluminium Jumper balance bike, which is styled like a mountain bike with a hint of BMX and is suitable for age 3-6 years. Your little rider needs to have a minimum inside leg measurement of 35cm, which works for us as Saria is very tall and would not have got much ride out of a LIKEaBIKE Mini.

Designed by German company Kokua, much like its wooden counterparts, it’s a total alternative to the traditional way of learning to ride a bike with no stabilisers or pedals and instead they use their balance to push the bike forward and steer. It’s the type of wonderful gadgetry that sceptical grandparents look at and say ‘How are they supposed to get around on that?! I don’t know why you young people have to get all fancy!’ and then they see it in action and zip it!

Incredibly light (it’s 3.4kg), it’s made from high grade 7005 aluminium and with about 10 minutes of assembly, it’s good to go. It’s got a unique steering limiter which basically prevents jack knifing (this can be removed when they’re ‘advanced’) and the seat height can be adjusted with the quick release mechanism and it comes with two seatposts – we found that we could have done with an extra bit of guidance about the seat height as I kept messing around with it trying to decide which height it should be – it’s more obvious with a ‘standard’ bike. Once tweaked though, you can get a precise seating height. Like all of their bikes, the Jumper has a handmade seat embroidered with the Kokua logo.

Unlike it’s birch plywood counterpart, it has spokes in the wheel and combined with the 12″ Schwalbe apple tyres (they also have puncture protection and reflective strips although we haven’t done night riding), it looks just like a bike except for the small matter of the pedals! This is brilliant if your mini cyclist is quite confident and not nervy, as they’ll be enthralled by a ‘big peoples bike’ but conversely, if they’re nervy, this has less of a playful appearance than the LIKEaBIKE Mini, so younger, not so confident riders like our Saria may be a bit intimidated by it. That said, you could experience this with any bike, balance or not!

Saria’s gradually got more confident with the Jumper bike and it’s actually been helped by her using a Micro Scooter, which she was also initially nervy with! 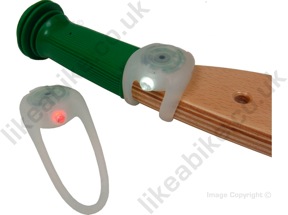 The bike feels and looks like excellent quality and it comes in a variety of colour ways – we have the orange version. It rides beautifully – I should know as I’ve whizzed around on it through our hall, kitchen and sitting room and got silly in the park…

They’re Â£150 each from LIKEaBike and are actually slightly cheaper than the LIKEaBIKE Mini plus they also come with a two year guarantee.

For any BG readers that place an order by phone, you also get a free Froglight (left) if you mention Bambino Goodies.