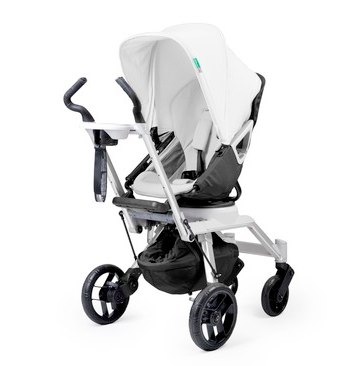 Well after nearly five years of hankering after the US designed Orbit pushchair, it’s finally arriving on UK shores on the 19th September and being sold through the likes of John Lewis. Designed by two dads, the G2 is the second generation, revolutionised design which sees the introduction of the patented smart hub, where the seat which rotates 360 degrees is situated. It’s a travel system so there is a cot/bassinet which can be placed on the hub to make a pram plus it’s compatible with Maxi Cosi car seats (our favourite). 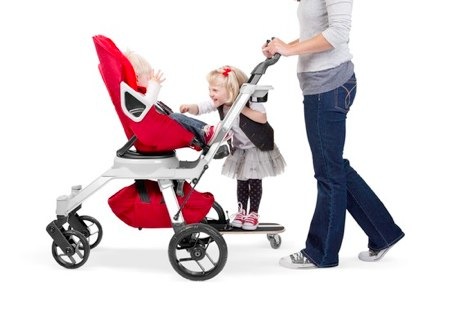 I got to take a look at it last week and had a demonstration from one of the designer’s Joesph and couldn’t help but be impressed. It has some very impressive features including the surprisingly roomy shopping/storage bag which slides out (see below) and speaks to the shopping fiend in me, plus you can buy extra side panniers that mean you can pack a helluva a lot of stuff onto this pushchair. You can add not one, but two of their buggy skateboards (Sidekicks) to it and next year the double kit will be available so this pushchair will be competing in the rather small doubles market. 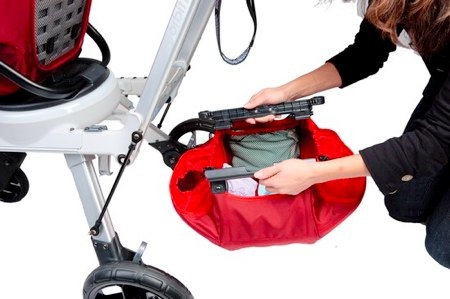 Rotating and reclining the seat is actually a doddle and as someone who has owned or used a number of the popular travel systems, it’s not a Crystal Maze challenge to move the seat (press and move) nor will you be asking strangers passing by with the same pushchair if they can remind you how to fold it downâ€¦. It’s a very smooth ride with great suspension and trust me, if you’ve ever struggle to navigate with a pushchair or feel like you can feel every bump in your wrists, you’ll all appreciate these features.It collapses fairly compactly and easily but like many travel systems, you might have trouble with certain buses.

What might you not like: Some may find the gap between the handles and the seat when it’s facing forward a little weird although you get used to it much in the same way that many have got used to the quirky appeal of another ergonomically designed pushchair the Stokke Xplory.

The other thing some may object to is the price, which if you’re doing the package with the pram bassinet, car seat adaptors, etc is Â£940. That said, if you’ve had a Bugaboo or Stokke on your shortlist then it’s not going to make your eyes water and in spite of the price, I’ve seen that these are very well used pushchairs.

If you are currently pregnant and know that you’ll likely have more than one child, or you want something that’s toddler friendly for your existing child(ren), this is definitely one to check out. 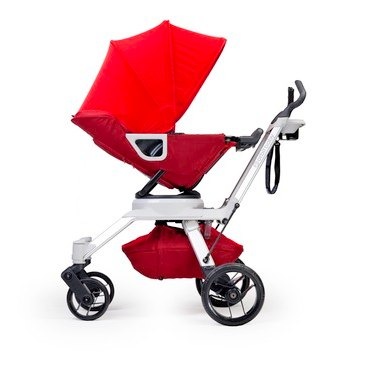