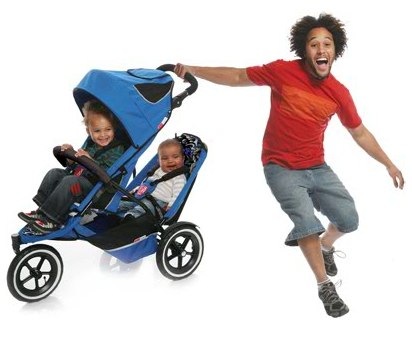 In over three years of buying baby and kids gear, no product has ever elicited quite the range of emotions that the Phil&Ted’s sport double pushchair does. On one hand, it’s a stroke of practicality genius that makes life with two children under three a hell of a lot easier. On the other hand, it’s a pain in the bum because the instructions are rubbish, it has awkward aspects, and it’s a weighty beast. And yet… I do love it and when I have to go anywhere with my increasingly challenging toddlers, it’s my saviour.

Right now, there are Phil & Ted’s Sport owners out there who are not entirely sure how to use it. How do I know? Because I know some of these people and if it wasn’t for the fact that I called up BG feature’s editor Kat with an expletive filled annoyance caused by the confusion of it, I may have just given up. She knows it so well, I’ve told her she should have a hotline or something as she’s even helped out random strangers!

The concept of the Phil & Ted’s Sport is fantastic. As a 5ft 3″ woman, I had no desire to try to use a tandem double pushchair where I’d have to cope with the hand span and awkwardness, not least because I live on a short, steep hill.

The New Zealand designers iconic pushchair is an inline design that basically has one child behind the other and isn’t much bigger than a single (travel system type) pushchair. Suitable from birth to five, they’re very suited to growing families because you can start off with just using it for one and then buy the additional seat. The frame is described as ‘lightweight alloy’ but in use, it’s one weighty, beast of a machine (it says it’s 11kg but it feels significantly heavier) and when I’m going down a hill with my hand through the wrist strap, I feel like I’m being tugged along by an excitable (and very heavy) dog.

The instructions are awful and to be honest, if Phil&Ted’s sorted this out, I’d have far less irritation with it. Titchy, black and white pictures with highlighted with red rings ‘details’ that you can’t actually see, and so called simple instructions that are over simple to the point of being silly.

“”assembling your new phil&teds inline sport is effortless and fun. just follow these simple steps and in 5 minutes you’ll be off!” Jokers! 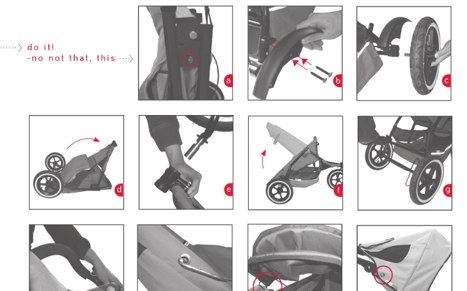 For Phil&Ted’s, they need to realise that you can’t market a pushchair like a Snickers bar.

The whole glossing over the instructions and making it out to be a doddle, makes users that end up taking far longer than five minutes feel stupid, something you don’t do with something that has a recommended retail price of nearly Â£400 and that’s excluding all of the additional stuff like the double storm cover and the cocoon which lets you lay a newborn flat in the back. Despite saying ‘female guidance required’ for the instructions, these instructions were neither written by or for a woman – they’re written for a guy that doesn’t read instructions…

It’s got a reasonably sized shopping basket…that gets a bit awkward with a child in the back, however, it’s fantastic should you find yourself on a big shopping trip with no-one in the back. One use of the storm cover and it goes from slim to bulky, so if you can’t fit it into the little pocket at the back of the basket under the seat, it takes up more room in the basket. A changing bag in the bottom (I don’t recommend you use a big one) will pretty much rule out you putting your handbag in the basket, and you’ll need to be careful hanging it on the handle, when both are in it.

The front seat has four positions that can be adjusted with zips and clips – it takes practice, but you get there in the end. Folding and opening is generally fine although the front wheel can get stuck, and you can remove the back wheels to put it in the boot of your car. It lasts from birth to five, but tall kids don’t get the full use with the hood on.

I dread using the Phil&Ted Sport with thong sandals, flip-flops – basically anything toeless – because you need to kick the skinny break like some sort of beat up bike, mashing up your toes in the process…

It takes various terrain really well (we loved using it in Center Parcs) but I must admit that I either need a stiff drink or a deep sleep after being out with it as it’s physically exhausting. Watch yourself on embarking onto trains or some big kerbs when it’s in swivel wheel mode as it can veer to the left instead of going on straight. Tube stations – forget ones with stairs or get ready to feel very sorry for the people who have to help you if you’re on your own. I haven’t dared to go near a bus with it as I’ve been caught out with smaller pushchairs.

Despite my gripes with it, overall, I couldn’t manage without it. I’ve now owned/tried out several pushchairs and the whole carrying the baby in the sling and pushing the toddler in the pushchair thing is not something I want to do every day, especially when you need to get to places with relative speed.

The Phil&Teds Sport gives you control of two young children when you’re out in a streamlined, albeit bulky way, and in the wider sense, it makes life simpler…once you get to grips with using it. There are other options such as The Vibe, the chunkier (dimensions and price) and more stylised version that came out last year, but I couldn’t bring myself to fork out more money for bulk even if it is more stylish.

Available from various stockists, we got ours from Kiddicare where they always have deals, plus they’re also sold in stores like John Lewis – check the Phil&Teds site for stockists.