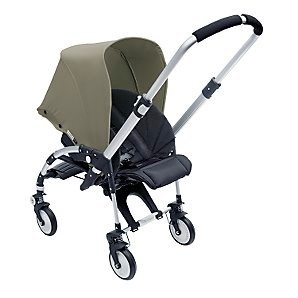 When baby Nia was about two weeks old, Bugaboo loaned me one of their Bee’s, which I’ve been using when the kids aren’t in the Phil and Ted’s sport (review of that coming soon!).

Concept: If you’ve ever baulked at buying any of its predeccessors, either because of price or bulk, the Bugaboo Bee bridges the gap. Compact, much lighter, although not lightweight like umbrella fold pushchairs, it’s formed around a one piece foldable design. No taking off bits and bobs to put it together or stow.

Tester: Baby Nia has been testing this since she was 2 weeks and is now 6 months. The bambino 28.5 months has used it occasionally.

Appearance: Bugaboo Bee’s have a quirky, bug appearance when the hood is pulled over, making for a gorgeous cocoon. Available in a selection of their high quality fabrics, they feature dinky wheels and are around 20 inches in width when unfolded. They’re very stylish, slimline pushchairs that hold the same aesthetic values as the Chameleon.

Setup: No real setup involved. Pull it out of the box and unfold. However…I have to admit that this was the second one that they sent me, as the original one I received when I was pregnant was so stiff to fold down.

In Use: The Bugaboo Bee works on a series of buttons, pushes, and clicks. It’s colour coded so anything that is white operates something but also due to the one piece design, you need to check that it’s opened out correctly, but thankfully there’s a green/red indicator on the frame for this. Very robust, you don’t need to be gentle when you push down with your foot on the break peddle which pushes at the frame to unfold it. The ventilated seat has a squeezing mechanism on the back which was stiff at first and you use this to move the seat to the position that you want – it has 3 reclining positions. This mechanism has it’s quirky moments although it’s a testament to the robustness of the Bee that it can more than withstand a good yank.

The seat can face both directions and switching isn’t hard, but it does take practice. It’s really quite light to push and as I live on a short steep hill, my litmus test is pushing it up this and it’s not bad as it’s got decent suspension. The handle is quickly adjustable and when it’s folded down, it’s OK to carry. It’s 7.7kg so this is light for a travel system, and you can add on your Maxi Cosi Cabriofix car seat, or the full recline with a footmuff makes for a pram-like environment, so no carrycot to buy. It takes up little room in the boot too.

It’s highly manoeuvrable with its small frame and dinky wheels, so I thoroughly enjoy using it on shopping trips (brill on buses, trains, and tubes as fits up aisles and doesn’t take up loads of room like typical travel systems), and it’s got a decent sized shopping basket. The wheels, however, are a pain in the bum on some kerbs and tricky terrain. The front wheels can be fixed or swivel with a squeeze once you know how but it does require you to mess around with the dirty wheel…

Any negatives?: I always find that there is a bugbear with pushchairs with each and every one having it’s own quirks and special way of being used, so I take it as a given. The Bee’s string in its bow is also the sting in the tail. Folding down a one-piece takes practice and adjusting the seat has its annoying moments. The front of the seat (where legs touch) has one side that seems to slip below the base it clicks into. The seat is narrow so I doubt it will last till they are 3. That said, the more people I speak to, the more I find that no matter what the size, most people don’t use their travel system until their child is 3. The raincover takes a bit of mastering too.

Price: RRP Â£360 A far cheaper alternative to the Chameleon so bound to appeal to style and design led that don’t want to go for bust or take the larger weight, however, depending on the size of your child, it may not last for as long as you’d like, and you are paying partly for the Bugaboo name. It’s at its best value if you don’t fork out for the accessories.

Overall: The Bugaboo Bee has me charmed because despite its quirks, I love it. A super-stylish, genuinely compact, light-ish alternative, that bridges the gap between very lightweight pushchairs and bulky travel systems, it’s great for urban jaunts and has fantastic manoeuvrability. Whilst I admire its design innovation and style credentials, it is questionable how many years use you’d get out of it.