I had planned to post about the bambino’s first birthday party/booze up, but the boyf is in trouble with me for misplacing the camera cable and it wouldn’t be the same without it, so here are the gifts that she got from us.

I should point out that the boyf got back from Germany on Friday afternoon and asked to see the presents (I’d sent him links of potential choices) and as I took out box after box, he said “That’s a lot of presents!” and it occurred to me that it was best not to mention that a couple of gifts still haven’t arrived yet…My justification is I had to buy on behalf of one of her grans who is abroad….

The first batch of gifts were from my obsession, Lula Sapphire. The challenge was to find toys that would challenge and stimulate her as she’s outgrown a lot of her toys. We chose predominantly wood toys that were beautifully crafted, unusual, and likely to last a long time. 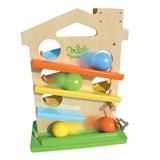 I featured this a couple of weeks back and as I suspected, the bambino absolutely adores it. It took her about five minutes to figure out what to do (drop the ball in the top and then follow it down the track) and she squealed with joy when she managed to catch one of the balls on the way down. 18 months + 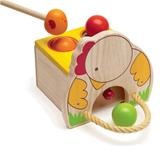 She’s become a bit obsessed with the hammer and hasn’t quite figured out how to bash the balls in (ooh that does sound a bit dodge). Note to parents: keep an eye on the hammer swinging…12 months +

This is a surprise hit and she literally sat with it for 45 minutes yesterday playing with the pieces and trying to figure out what was going on. I have asked her to stop chewing the pieces…which she’s ignored. 12 months + 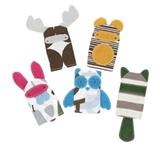 I have been hankering for these ever since I saw them. The boyf is convinced these Dwellbaby finger puppets are more for me. The bambino keeps giving me a bemused look when I get them out but I’ll make her laugh yet… I love the fabrics and the unusual material and faces. From Birth