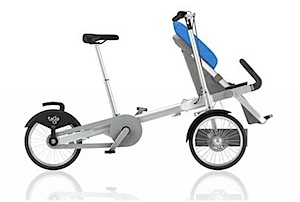 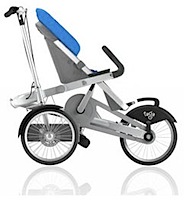 I’ve been reading about the Taga Bike Pram for several months but it was only this past weekend that we saw one in the flesh when we were shopping in Kingston-Upon-Thames. The boyf is a cyclist (I should say he ‘used’ to be as that bike hasn’t seen the light of day for ages…),so when he spotted it he couldn’t stop staring at it.

A unique proposition, it’s a bike and pushchair ‘pram’ combined, with modular function. So remove the bike off the back and hey presto it’s a pushchair or get yourself some exercise whilst your tot rides around in style at the front when you use it as a bike. You can add on another seat so you get a double pushchair which is quite exciting considering the lack of versatility with double pushchairs.

In the future you’ll be able to remove the pushchair and put a whopping shopping basket ‘cart’ on the front, so for those who want to save money on petrol (and be kind to the environment), the bike will have plenty of capacity when you do a load of shopping. It will even be able to be turned into a full shopping cart. 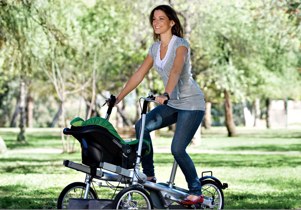 I actually envisioned myself using it when I saw the Maxi Cosi Cabriofix infant car seat image. There are plans for a larger wooden seat for older children and I suspect that there are many modular possibilities for this product in the future as it can literally last for many years. And actually, at an RRP of Â£1695, it’d need to!

For me who has an aversion to bicycles, it looks like hard work as I’d need some great leg strength to pump the peddles to carry the weight of the extra load. It’s 20-29 kg depending on the configuration so you need to be fit plus my legs seize up when I think about using this in our very hilly area. I was a bit worried about what it would be like to unmount from but the 3 wheels give it stability.

It’s available in cyan, green, orange and red and even though I’m in no danger of becoming a cyclist, I do think that the Taga Bike Pram is representative of the type of child transportation that we’ll increasingly see a lot of in the future. Yes it’s Â£1695, but it’s really versatile, built to last, and if you were going to use it a lot, will undoubtedly save you money and cut your own personal contribution to carbon emissions.

Check the Taga site for more information and stockists which include Brighton based LiliMay – I can imagine this going up and down the seafront!