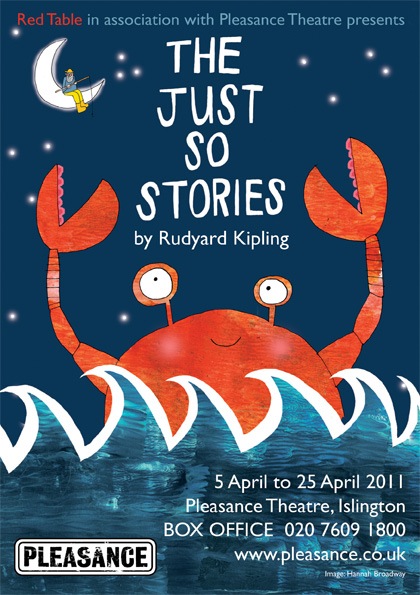 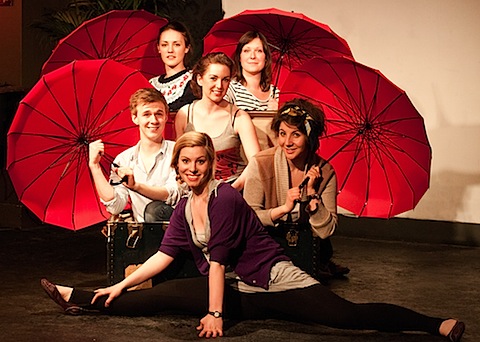 If you’re in London over this Easter weekend and can bear to drag yourself out of the sunshine and into the theatre for an hour, make a beeline for the Pleasance Theatre where classics from Rudyard Kipling’s ‘Just So Stories’ are being performed until the 25th April.

I took the kids along with my friend and her two and we were immediately sold on it when we walked in and the kids were invited to sit on duvets right up beside the stage. Nia refused but the rest of the kids were off like a shot.

The storytellers breathe life into five stories – The Crab Who Played With The Sea, How The Camel Got His Hump (our favourite), The Elephant’s Child, How The Whale Got His Throat, and The Cat Who Walked By Himself – by using every day objects that you’d find around your attic, admittedly probably your grandparent’s one. It opens with the cast clambering out of trunks, furniture and carpets which invited little gasps of awe from its young audience. The red umbrella’s pictured form a very believable crab which just turned two Nia declared “agusting” – we don’t call her Grace Jones for nothing…

This is the type of play that does require a little imagination so it’s definitely ideal for the four year plus little one’s its aimed at, as Nia and her almost 3 year old friend got a little restless in parts. For me as a big kid, some stories were stronger than others (crab and camel are ace) and I think some of Kipling’s language will undoubtedly get lost but this doesn’t stop it being an enchanting, inspiring hour that makes you want to go home and get creative with stuff lying around the house.

Where: Pleasance Theatre (nearest stop Caledonian Road and about 5 mins walk). If you can avoid taking weighty pushchairs like the Phil and Ted’s Sport, I would as you have to get up stairs to get to the theatre

Inappropriate private joke between parents moment: There is a line where the storyteller says “And the dog came out with a stick in its mouth” only as she said it so quickly, it soundly like a very filthy reference. We cried with laughter for nearly ten minutes.

« To Be Us wooden car
Weekend Reading: Timbuktu iPad Magazine »