When I spotted Milo’s super cool wild west room on his Mama Abby’s blog, Little Red Buttons, I knew you would all love it too. Based in Nottingham, Abby hails from America and wanted to create a feel for Milo’s American roots and still be stylish. As Abby says: The inspiration for the roomÂ came fromÂ a cowboy and indian duvetÂ by Cath Kidston.Â  I was pretty anti-theme for any kind of room, but the print won me over,Â plus I thought it was something that could grow with Milo. I had a pretty specific idea in mind. The room is quite small and so I wanted to keep it as simple as possible.Â  And since Milo is 1/2 American, I wantedÂ incorporate some bitsÂ that gave the roomÂ a sort of Western/Americana vibe, but without feeling cheesy. 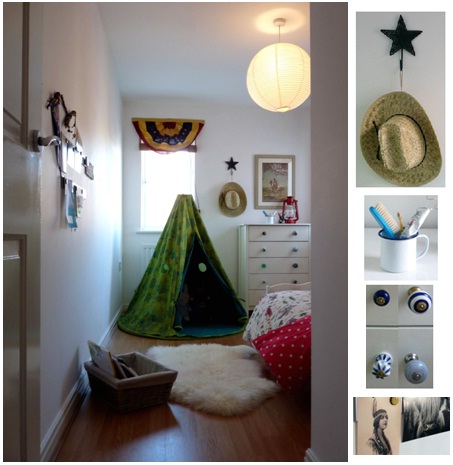 With a limited budget Abby has used a combination of thrift, statement pieces and accessories to create a cohesive look for the room. The bed was a lucky eBay find which was given a fresh coat of paint to breathe new life into it. The chest of drawers is a simple white set from Argos which has been transformed by a set of ceramic drawer knobs from The Token House. The red of the duvet is picked up by the lantern on the chest of drawers which provides a backdrop for some vintage western themed toys. 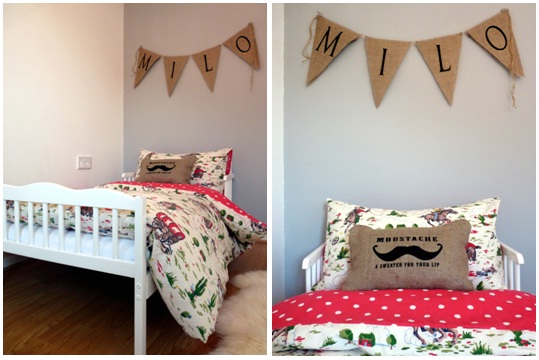 There are many elements of this room which bring an authentic wild west feel to the room. The Milo name banner made from burlap and the funky moustache pillow were both Etsy finds which look fab together. Milo is a lucky boy as he has a super fluffy sheepskin to step out of bed onto although, Abby would trade it in for a cowhide if she found one at the right price. Throughout the room there are images of Native Americans in the artwork and the Mataneque pennant. Of course there has to be a teepee and Milo is the lucky owner of a Geronimo play tent from Habitat.

Abby has managed to achieve her brief and has created a room which in her own words is: Clean, a bit whimsical, a bit vintage and very rough and tumble. Every aspect of the room ticks the wild west box whilst being both chic and playful. Thank you Abby for sharing this room with us and Happy 2nd Birthday to Milo for next month. 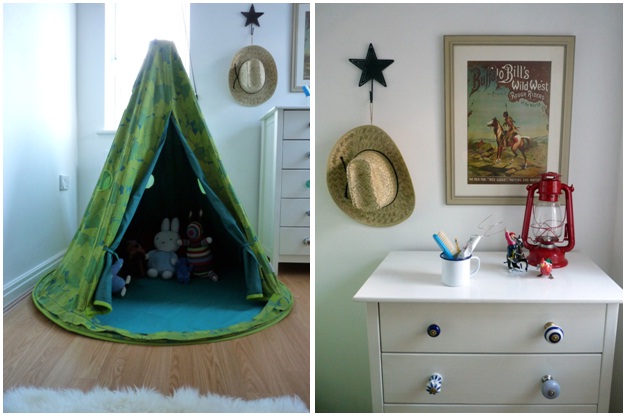