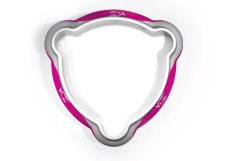 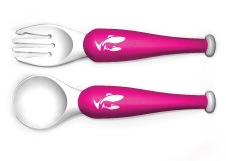 Natalie writes…Last May I featured Me-Feed-Me Dinnerware by Salmon Luke, a British design with clever features that seeks to help toddlers feed themselves without the food ending up everywhere and frustrating you both. We received a set recently and have been trying it out for the past couple of weeks.

They’re BPA (Bisphenol A – the chemical that has had lot of bad press) free and self sterilising as they’re made from Hygienik (TM), a plastic material unique to Salmon Luke that doesn’t allow illness causing bacteria to grow and they’re suitable from 1-5 years.

Appearance: There are only two colours available – rocket blue and perfect pink. and they feel pleasant to hold. I particularly like the shape of the cutlery and even though they’re traditional colours (I hope they branch out – black or some cool brights maybe?), the fact that it’s hot pink makes all the difference. Anything lighter would have muted it.

In Use: The bambino is a food lover (seriously big appetite that she gets from her dad) and has no problems helping herself to food by hand but does get bored and frustrated with traditional toddler cutlery for the very reasons why the Me-Feed-Me dinnerware was created and also because it takes too long for her to eat with shallow cutlery and easily tippable bowls. She has no patience when her tummy is rumbling…

We’re not sure what it was, but literally at the same time that we received the set. she decided that she only wanted to eat if she was in charge. She seemed a little caught off guard by the change in shape of the bowl and cutlery and eyed them suspiciously, but she was even more caught off guard when she got a big spoonful of food in. After that, she was hooked, and I have to admit we found it fascinating to watch her use the set.

There really is less food spillage (yay), it really doesn’t move all over the place, and it does have an uncanny knack of pushing food back onto the cutlery. We love the fact that the fork picks up food properly because many plastic forks will pick up but not grip the food properly, causing it to fall back off.

Proudest moment: watching her feed herself porridge and us both being rather chuffed with ourselves.

Any negatives?: Other than the vanity of wanting more colours, no and that’s not a negative, just an excuse to buy some more!

Overall: Salmon Luke have come up trumps with a well thought out feeding concept that does what modern parents expect from their products – makes life easier and in turn makes mealtimes fun and pleasurable. These are well worth the money!