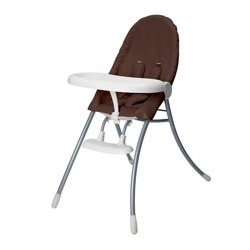 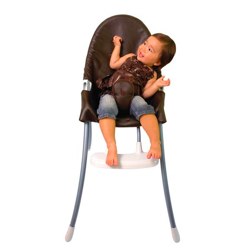 Concept: bloom (they like their name spelt in lower case) is four dads on a quest to deliver functional designer furniture for children using sleek materials and strong ethics. Aimed at urbanite parents short on space, the nano highchair’s job is to ‘sit, fold, store’ with a contemporary design. Suitable from 6 months to 3 years, it’s quite light, has a 5-point harness, and can be pulled up to the table, or you can use the big feeding tray. There’s also a 2 position adjustable footrest.

Tester: Arrived just in time for baby Nia to start weaning just before she was six months old and she used it for six weeks. The bambino also gave it a few go’s until she realised that she didn’t like Nia using the Svan…

Appearance: If you’ve ever felt nervous of more traditionally styled highchairs that have lairy patterned plastic seating with imposing designs, you’ll love the Nano. It features a micro-leather seat (ours was the Henna pictured) and is available in five other colours – ebony, red, white, green, blue, and orange (my favourite). As I’m vain about my products, I’m not big on the white feet though.

Set Up: It’s almost ready to be used so no major assembly used and it’s quite intuitive so whilst the instruction guide was good, you could set it up without it.

In Use: Unlike some of its counterparts, the Nano’s seat is fixed so no adjusting. The first couple of weeks, especially with Nia only just getting used to sitting up, it was a bit annoying, as the seat back isn’t straight up so it has a slightly loungy feel and she would get a bit slouchy. However, after that as the little diva got very confident, she sat up straighter and engaged with the table. Whilst we are hardcore lovers of our Svan highchair for its minimalist design, I have to say that it’s only when you have a highchair with a large table on it that you realise how handy it is. The big lip for food spills and finger food certainly came in handy and the table can be removed and put in the dishwasher.

It was a dream to clean. The ‘ole Black and Decker dustbuster zipped out the crumbs and it was genuinely one of those easy wipe clean chairs. Many highchairs are buggers for attracting and keeping dirt in every crevice – not this one!

Even though I thought I’d fold it down more, we actually liked it enough to leave it up for the great majority of the time whilst we had it. This says a lot! It does have large foot print although this is mostly caused by the splayed legs, but it folds down flat, although I did find that folding down in a rush was a bit stressful as I kept trying to use the folding mechanism in the wrong direction.

We liked this for its simplicity as we’re not keen on highchairs that want your kid to practically take up residence in it, but this means that the non-adjusting seat and lack of stuff like storage bags cuts will be unappealing to others.

Any negatives: From a vanity point of view, I’m not sure about the grey legs. In fact, a black table on these would be brilliant but that would probably push up the price. Initially, I found the clips on the harness to be really stiff which could result in a wrestling session and folding had its fiddly moments although the boyf claims its easy. Minimalist lovers will still find this a bit on the big side.

Price: Â£100 – If you love bloom but baulk at spending around Â£270 for their fresco highchair, this is a great entry point into their quality and aesthetics.

Overall: A sleek, well designed, functional highchair that ticks the contemporary boxes, it looks good enough for you to actually want to use it for the two and a half year life span. High style at a reasonable price – we just wish they’d used black finishing!

Check out the rest of bloom’s products. The nano is available from Lula Sapphire – BG readers get 10% off at the moment. Also try John Lewis or check the bloom site for stockists.