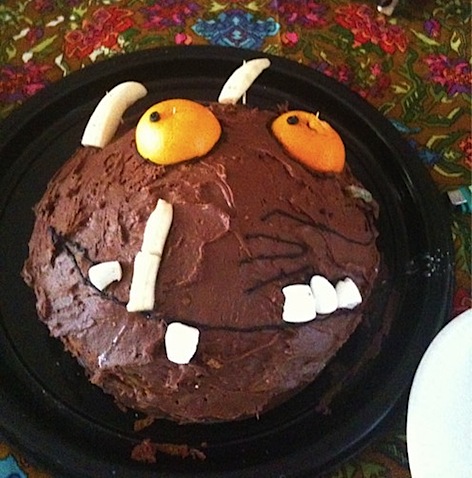 Last week my baby Nia turned two and we celebrated with a Gruffalo party because she is, along with Saria, obsessed with the book and the short film. While I’m not keen on much character led stuff, the Gruffalo is a story loved by so many and I gave myself a brief of coming up with creative homemade food that both adults and kids would love.

For the Gruffalo birthday cake, taking inspiration from a BG reader on Facebook, I made two Victoria sponges using the Nigella Lawson recipe from How To Be a Domestic Goddess. First time I’d baked a sponge since home ec in the convent school and they turned out perfectly so highly recommend the recipe! I’m wheat free so I made it with Dove’s Farm Plain Flour.

To sandwich the two cakes together, I used buttercream icing that I’d made my accident in an attempt to make chocolate icing…every cloud and all that jazz… I use the recipe from Rachel Allen’s Bake – it’s basically butter, caster sugar, and a tablespoon of milk/water. You could equally just use cream.

The chocolate icing is from the same Nigella cookbook and is a doddle to make…as long as you don’t forget to sieve the icing sugar until you’re half way through – spin any lumps as Gruffalo prickles…. I covered the sides and top with it.

The fun bit – how to make The Gruffalo’s face.

Two bananas – One banana cut in half does the tusks. We then cut the 2nd banana in half and then halved again to make the long tooth. Use toothpicks to keep the tusks steady.

Black icing pen – Easily found on the confectionary aisle. Recommend a steady, slow hand and practice in pen on a piece of paper. Use the pen for the mouth, nose, whiskers, eye pupils, and to draw around the clementine/satsuma eyes for added effect.

Clementine – Cut in half and scoop out. Position on cake with toothpicks. 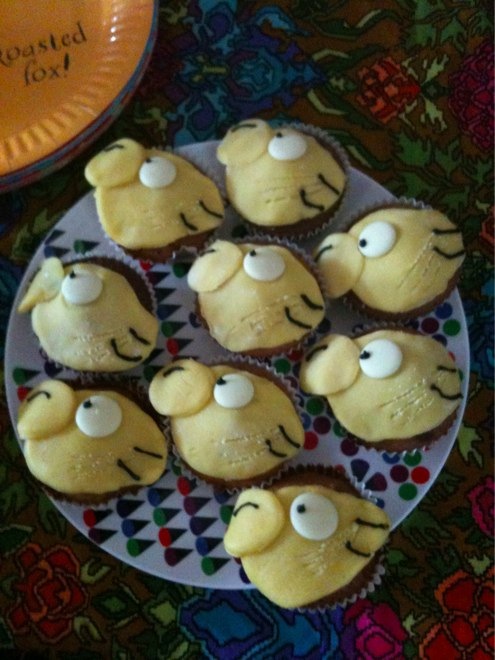 Probably my favourite thing to make, these Gruffalo mouse cakes were hit with the kids who took them home. I made fairy cakes (I use the recipe from the Bake cookbook) and then I used Waitrose’s readymade Golden Marzipan, a pack of white chocolate Buttons and black icing. If like me, you’re no domestic goddess with a kitchen full of equipment, find a couple of circular items to make the ears and face – just pull the circle out on one side slightly to give it the mouse face shape.
You need to roll out the marzipan – dust surface and rolling pin with icing sugar. Use a trusty toothpick to put the whisker details in. 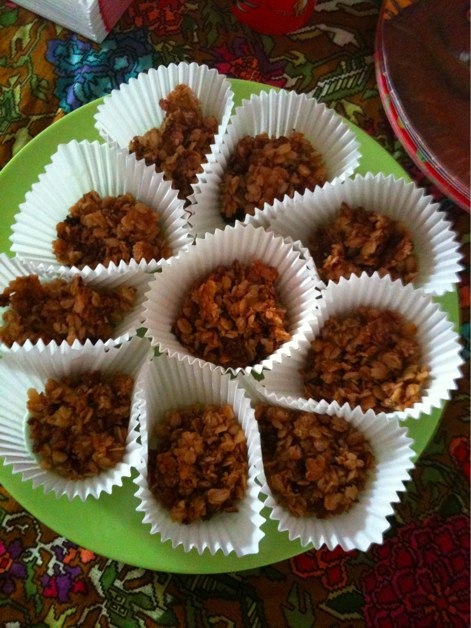 I crumbled up some homemade flapjacks to make scrambled snake but equally could be done with crispie cakes or even crumbled banana bread. 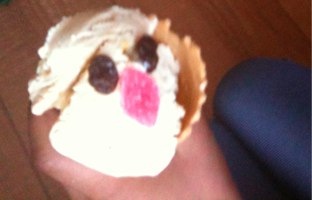 In all the excitement we actually forgot to do the owl ice-cream on the big day but the girls had some later that week – a couple of scoops, two raisins and a jelly diamond. Thanks to Kat for the suggestion.
For roasted fox, we all dined on kebabs from the barbecue, as well as mini burgers made by my brother from a Jamie Oliver recipe. 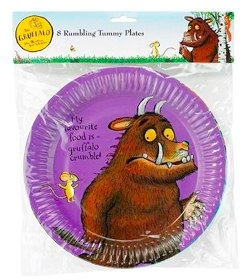 For Gruffalo party gear, look no further than Juicytots where we had plates, cups, balloons, and a banner. BG readers get 15% off too. 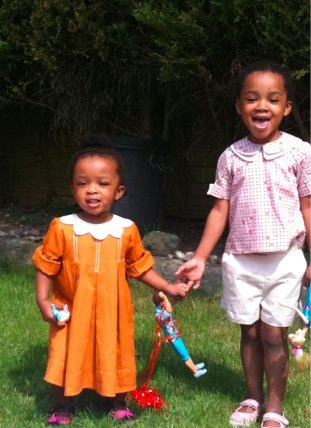 Nia (left) and Saria holding hands with ‘BarbieKen’ and a Plan Toys wooden bunny. Nia’s wearing a dress by Little Ducklings from Sisters Guild with shoes by Shak-Shuka which will be selling in the UK shortly and Saria’s wearing Hucklebones with Max & Lily summer shoes from One Small Step, One Giant Leap.