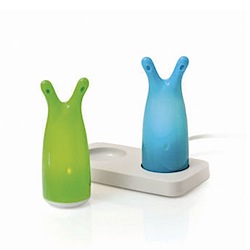 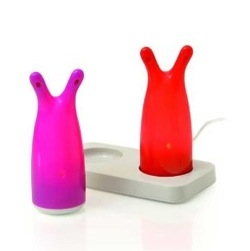 For about seven or eight years, I’ve been a fan of NYC based OXO’s Good Grips range of kitchen products as they’re well designed, functional and very attractive. You’ll instantly recognise their kitchenware as they tend to feature very comfortable black rubber cushion handles and they’ve now got what were originally called Candeloo lights under their roof too. We’ve been checking out a set of their now called Candela Tooli night lights for a few weeks which are suitable for both indoor and outdoor use.

Like two little alien-like pals, this is ambient lighting that comes in two colourways with a handy recharging plate, which while not as funky looking as the lights themselves, it’s actually got the cool factor in its own right. They give off light for around eight hours and when you lift them off the plate or the leccy goes out (does that type of thing still happen?), they automatically come on. Very easy to use, kids can also turn them on by pressing the button underneath. Totally cool to the touch, they feature LED lights that will last for the Tooli’s life and of course are super useful as guiding lights to the bathroom. You also don’t need to be stressing about the bulb being busted up if your child drops it.

The girls love them and immediately decided whose was whose and Saria has been found with a Tooli and Lola chit chatting under the covers – naughty thing! Nia chats to hers and puts in the corner of her yellow Brio cot just before she goes off to sleep so it can keep a watchful eye on her.

We love the look of the Candela Tooli’s and they totally fit in with our home but these lights are definitely aimed at people like us who like quirky, bright, and contemporary styled kids products. They aren’t the cheapest of night lights as they cost around Â£53 for the set although do shop around. That said, you do get two night lights out of it and they can be used outside so they have genuinely prolonged, multi-tasking use, plus they’re very eco friendly.

They’re not widely available online yet but Nubie and That Cute Age sell them. Mamas and Papas also sell them but they’re not available online at the moment so it’s worth checking with them via phone. A Google search also revealed an independent store called OXO Good Grips Shop and they sell singles for Â£33.09 in very lovely yellow but we haven’t shopped at this store so do check it out before you shop!