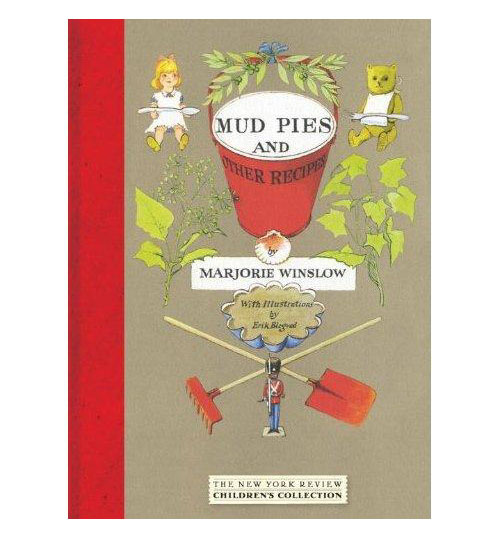 Some kids love to create culinary masterpieces for their dollies and teddies, out of petals, leaves, puddle water and mud. I know, because I’ve got one of them – though I suspect that with her, it’s more an excuse to get muddy and stir things with sticks than it is any early blossoming of a maternal instinct. Mud Pies and Other Recipes: A Cookbook for Dolls by Majorie Winslow and Erik Blegvad is for that sort of kid. If you’re thinking, “Who needs a cookbook to throw together some mud and dandelions?”, then think again. There’s some great imagination at play here:

STUFFED SEA SHELLS
Scoop up a shovelful of sand that has just been licked by a wave. Pack this into the tiniest sea shells you can find. Sprinkle these with a pinch of dry sparkling sand and serve.

FRIED WATER
Melt one ice cube in a skillet by placing it in the sun. When melted, add 1 cup water and sautÃ© slowly – until water is transparent. Serve small portions, because this dish is rich as well as mouth-watering.

This book will have your kid making moss shapes with biscuit cutters and arranging them on a leaf, or tossing a salad as high as she can into the air, always making sure it’s caught in the bowl. Fun! It’s a reissue from a 1961 book which seems to have completely passed by my own childhood; judging by the comments on Amazon (Â£6.99), though, it was well-loved by an entire generation who are now foisting its particular brand of humourous imagination upon their own sons and daughters.