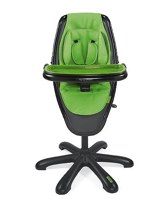 A while back I wrote about the Mamas and Papas Loop Highchair, a new, souped up offering from them that’s clearly trying to make a play for the high end highchair market predominantly occupied by the Nano Bloom and the Mozzee Nest. I felt excited because I would have laid bets that it would come in cheaper than its designer competitors and come in below the Â£200 mark. How wrong I was! Yeah, it happens sometimes!

Now, are there people out there that are big enough fans of Mamas and Papas that will spend Â£250 on a highchair from them? Well that remains to be seen but it’s unlikely that I would be one of them!

Mamas and Papas have far more reach than the likes of Bloom and Mozzee and I imagine a lot more purchasing power and I wonder why they couldn’t market this at a lower price or are they trying to cash in on fans that just love to own the brand?

At the end of the day though, there are more than enough people who want to own highchairs at designer prices so no doubt they will sell more than a few.

Visit Mamas and Papas to see the Loop offering. Â£250 includes the accessory pack (Â£50 if you want to buy another one separately) which comprises of a padded seat, reversible posture support, chest pads, and a co-ordinating dinner tray.

Read my original post about the Mamas and Papas Loop Highchair to find out more about the features.