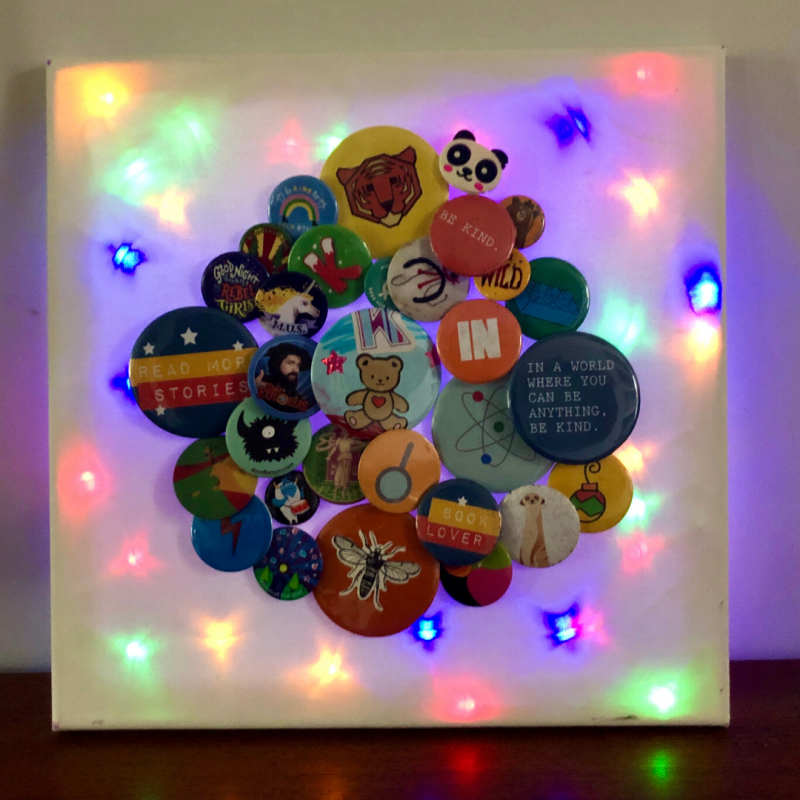 I don’t know about you, but it feels as though we’ve never done as much craft as we have over lockdown. I’ve also been trying to organise the children’s rooms a bit more so they don’t permanently look apocalyptic (seriously how many tiny things can a child own?) and realised how many badges they had. I remembered an Insta post by Vickie (aka INPOlife) about her badge canvas and decided we’d give it a go.

We bought a couple of square canvases from Cass Art and sketched a rough outline of a circle. We fell at the first hurdle when I brandished the hot glue gun and Kitty declared that she wanted to be able to wear the badges. So we stashed it back in the craft cupboard and I started pinning the badges on in her design. It was pretty tricky and I can’t say I didn’t wish we’d gone down the hot glue route, but we persevered until she wanted to stop (about 30 badges in) – we’ll be adding more badges another day. I’m sure you’ll recognise some of the badges from the Bambino Goodies store!

Finally, we added LED fairy lights with a battery pack to the back – I literally just tucked them in behind the frame, but it looks pretty effective. If I was doing my own I’d definitely hot glue them on and probably plan the design on paper first, but Kitty loves it (she has been using it as a night light), so a definite success story. A great way to keep an older child entertained.