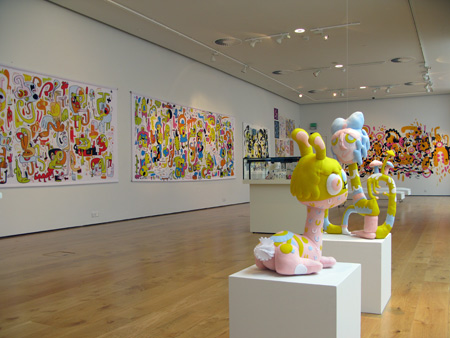 As massive fans of Jon Burgerman there was more than a little squealing when I discovered that Winchester Discovery Centre (formerly the library) was hosting an exhibition of his work. Brain Drain is housed in the gallery and the blurb says:

The show will involve the squishing, twisting and wrenching of Jon’s meagre brain to elicit revelational truths and insights through the medium of pens and paint.

Augmented reality, dualism, twin earth theory, the pineal gland and the perfect sandwich are current concerns being wrung out.

These themes are taken as starting points for the creation of often flowing and interconnected hand rendered works that are simultaneously painting, design and mass communication.

While my poor brain struggles to understand the complexities behind the exhibition, my eyes are in no doubt that it is a visual delight of the highest order. His work is wonderfully accessible to children and Milla was entranced by the large scale works as well as the smaller pieces. She was especially tickled that he had drawn on the wall (above) and we have had several chats about how interesting it was and how she would like to draw on the walls when she grows up. The other sections which she enjoyed were the Collage Wall (below) which is made up of Jon’s characteristic doodles on cardboard and paper packaging and the Soft Sculptures (top photo). The sculptures are a 3D interpretation of his creatures made in collaboration with Felt Mistress. 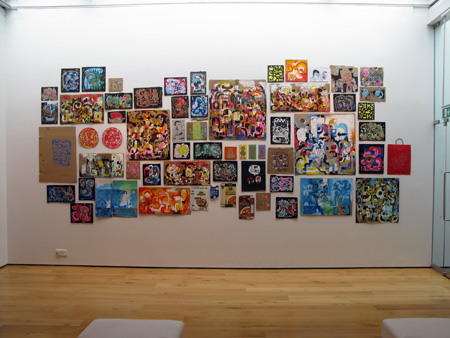 I love Jon’s work for so many reasons and this exhibition is a real treat. It is running until the 11th July 2010 so if you are in the area or fancy a trip to Winchester make sure you stop by as it is well worth a visit. 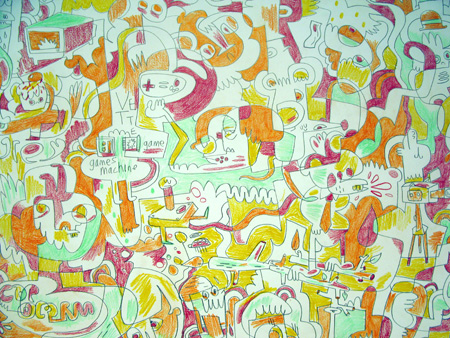 Photographs used with the permission of Jon Burgerman.