Having a Frozen-obsessed four-year-old who begged for a Frozen-themed party is enough to give most parents the shivers, let alone one who writes about stylish stuff for kids! However, her wish is my command so off I went to find FrozenÂ minus the tat, but still in budget! And I think we managed it quite well. 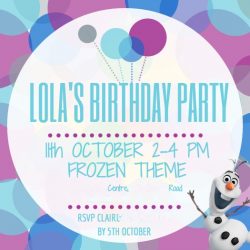 As usual, I made the invites myself using the blue, teals and purple of Frozen and adding a little Olaf Â (he’s the snowman if you’reÂ uninitiated – is anyoneÂ uninitiated?). I used those colours throughout, but tonedÂ themÂ down a tad – for my sanity more than anything!

With Christmas on the horizon, I was able to pick up 3D snowflakes and snowflake garland at our local discount store.Â I purchased 40 helium balloons in pink, blue and white and then sat and crafted 30 3D snowflakes to hang from said balloons. It looked great. The kids and adultsÂ loved it. I will add the tutorial soon. Super-easy if a tad soul-destroying – thankfully my friend Claire supplied coffee and dirty laughs as we set up a little conveyor belt! I am so annoyed with myself for not taking photos of the balloons and snowflake set up!

We used the local community centre, which isn’t pretty, so I created a photo backdrop out of ‘luxury silver tablecloths’ (notÂ actually that luxurious atÂ 75p each from Asda). I then sprayed on snowflakes and used the 3D snowflakes to decorate. I am really pleased I did this. All the kids wanted photos with Anna & Elsa and having a bit of a backdrop made themÂ looks much better. However, the fold lines of the tablecloths bother meÂ a lot. I may have to get my Photoshop on!

I made brilliant banners, using card shapes with letters, hole punched and strung together with silver wrapping string. I used a template from Etsy, which you can buy for just 64p!

I hired a local company, Manic Stage Productions, to do a dance workshop and a special guest appearance by Elsa andÂ Anna themselvesÂ (see above). They sang and danced and at the end the children put on a little show for the adults. Cute! I actually got a little misty eyed. Lola was thrilled. Possibly in shock of a good ten minutes after their arrival, but she totally loved it. She came running up to me as soon as she had a moment and whispered in an excited voice, ‘See Mum, I told you they were real.’Â Priceless. 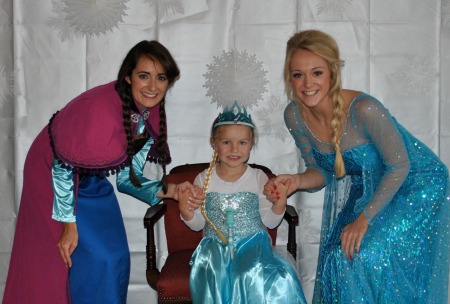 I printed off a huge Olaf and the kids played pin the nose on the snowman and I also printed off colouring sheets and provided crayons in case any of the kids didn’t fancy singing and dancing. Thankfully, despite constant rain up until the party the sun popped out, so the kids were also able to get a bit of fresh air.

Drinks, water. Well it is melted snow, isn’t it? As well as squash. Bang on theme, and with a mixed lot of stripy paper straws – similar to these – looked great too!

Phil and I got a little creative in the kitchen, making marshmallow snowmen, snowman-shaped pizza, reindeer cheese on biscuits, frozen strawberry hearts (dipped in white chocolate) and a fruit castle. Sandwiches were cut into hearts and stars. Everyone complimented my cheese mice, and I gave up trying to explain thatÂ they were reindeer! 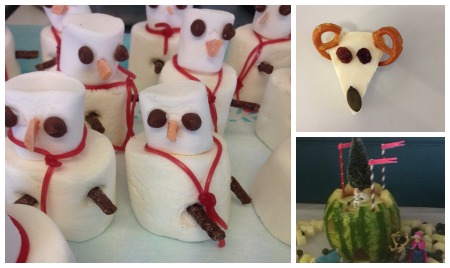 I was told that if you add a little blue food colouring to lime jelly it goes a lovely shade of blue. I questioned it from the off as the colour-mixer in me was dubious. My inner colour mixer was right – it goes green. So the kids ate green jelly and ombre cakes for pudding.

One of my dear friends made a cake using the mini-figures we already had – thank you, Suzi, you’re a superstar! Us BG girls are so lucky with our cake-making friends and families! 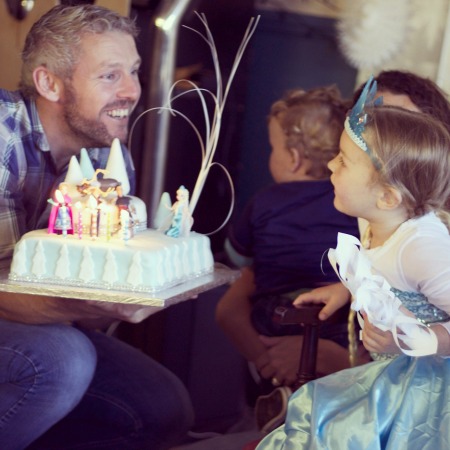 We don’t do goody bags, but we do do favours. My budget is about Â£1 per child and I think it’s fair to say I came up trumps with the wands from Etsy sellerÂ Teddy the Toad. 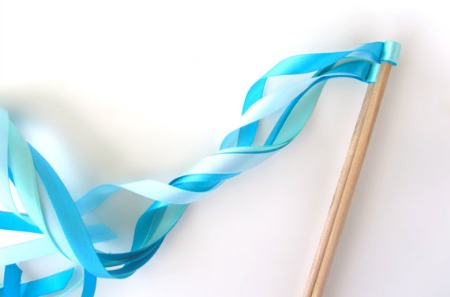 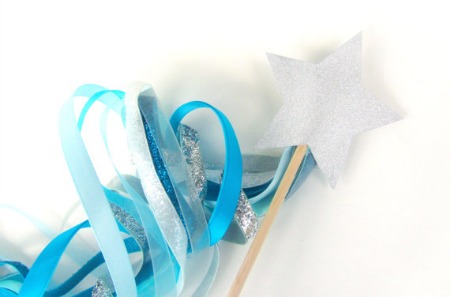 30 wands cost me just over Â£30 and that was with priority shipping, too (I left it a little late!)Â – the cost of the wands was only Â£18! Lola received a special wand, similar but a little more ornate. They went down a storm. The children all recieved a wand, a helium balloon with a snowflake and a big slab of cake.

I have saved lots of the ideas for this party to a Pinterest board, so if you’re looking at doing a tat-free Frozen party check it out. Lola loved her party and her little friends all seemed to too. Job done, without anÂ Anna and Elsa napkin in sight!