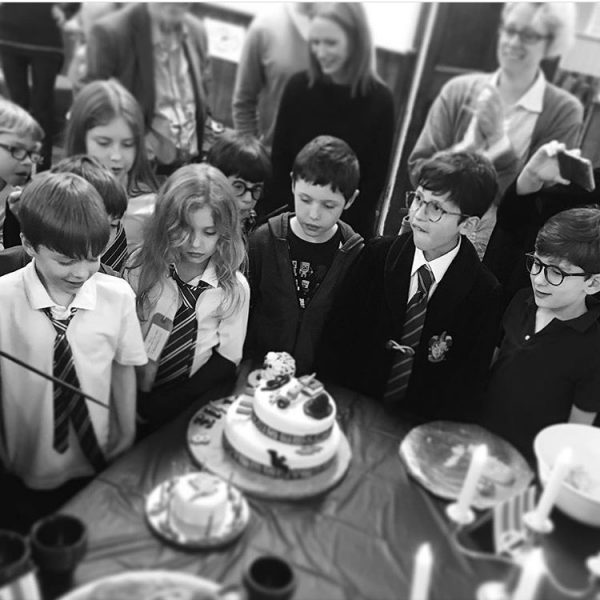 Twenty years ago today, Harry Potter and the Philosopher’s Stone was published (how old do you feel now?) If you follow us over on Instagram (if not, why not, get over there now!) you’ll have seen that Alfie is completely obsessed with all things Potter. So, it was no surprise that he requested a Potter-themed party for his 8th birthday. Luckily, there was no shortage of brilliant ideas when I hopped over to our old friend Pinterest. In fact, I reckon we have enough equally good ideas that we didn’t include to do another party next year. 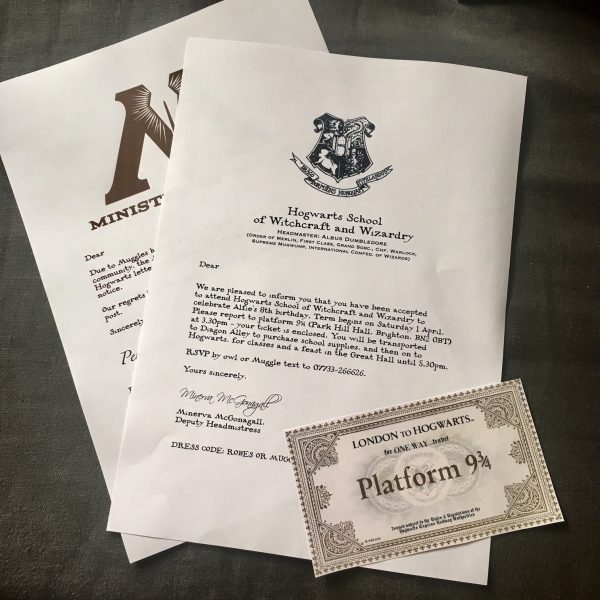 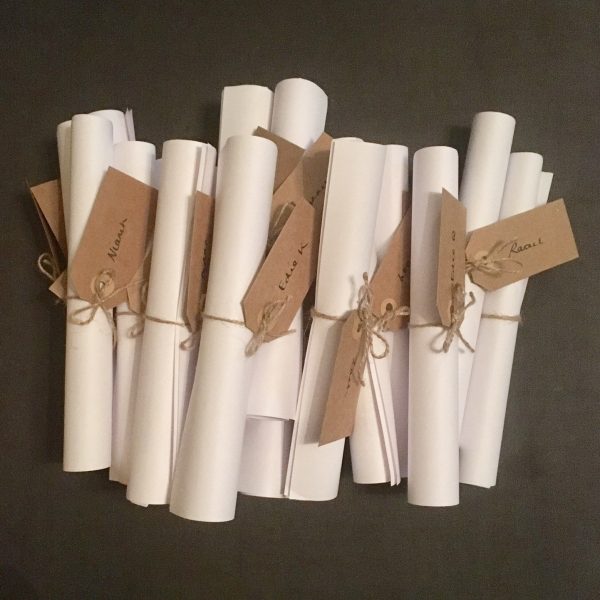 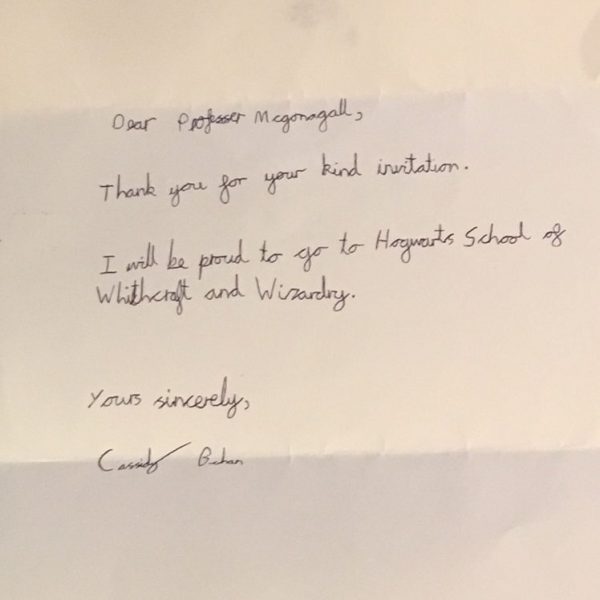 First thing to do was invites. I downloaded the fab Acceptance Letter font and went to work on a letter from Professor McGonagall (me), printed on parchment (naturally), inviting the children to Hogwarts for a taster session,. Obviously the logistics of owl delivery were beyond me (although I have seen owl balloons being used), so I also included a letter from the Ministry of Magic to explain that we couldn’t risk them being seen by Muggles and a Hogwarts Express ticket. For added authenticity, I  rolled the invites into a scroll and tied with twine and a label, then pilfered Alfie’s calligraphy set to write names. The children LOVED them – I even got this brilliant (wax sealed) response! 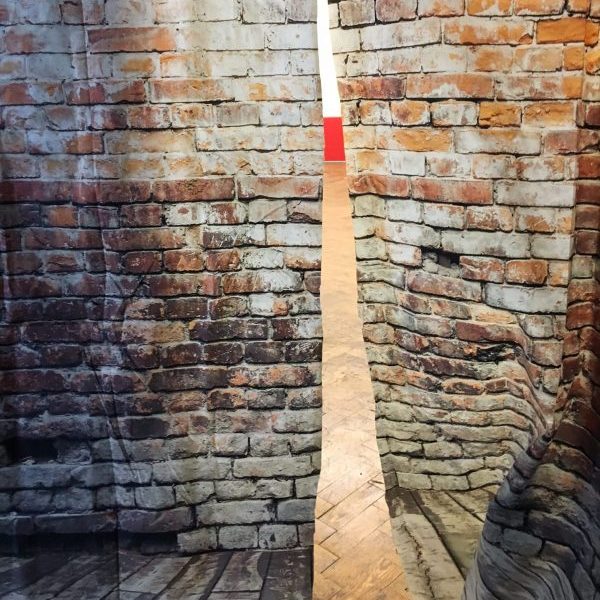 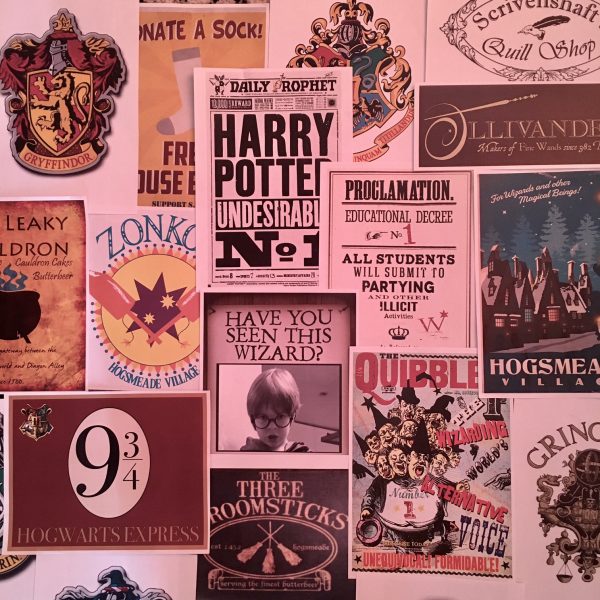 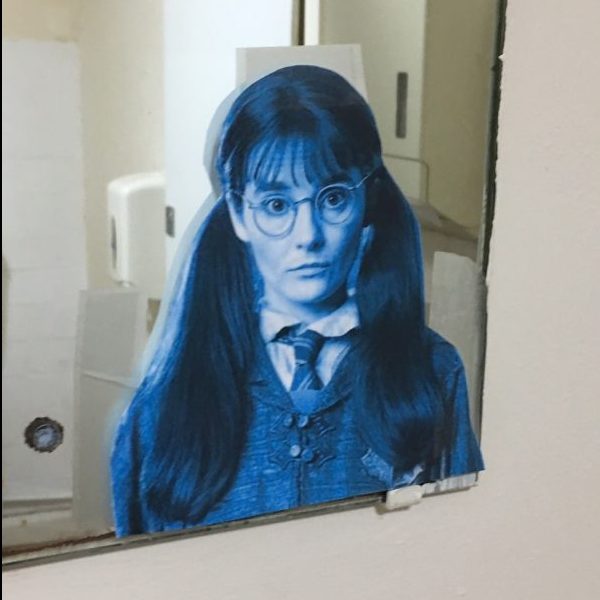 So, onto the party. You can really go to town with decoration with a Potter party – I had to reign it in a bit, if I’m honest as I could have spent all day every day adding bits and pieces. The guests entered through a brick wall backdrop, where I set up a photo opportunity with a cloak (although most of Alfie’s friends came in full Hogwarts uniform), Gryffindor scarf, broomstick and Hedwig in an owl cage under the Platform 9 3/4 sign. I relied heavily on print outs – signs for all the shops and classes, Hogwarts and Hogwarts houses’ crests, posters advertising Hogsmead and supporting House Elves, plus front pages from The Daily Prophet and The Quibbler. I also stuck This Way to the Ministry of Magic signs on the toilet doors and Moaning Myrtle on the mirror. 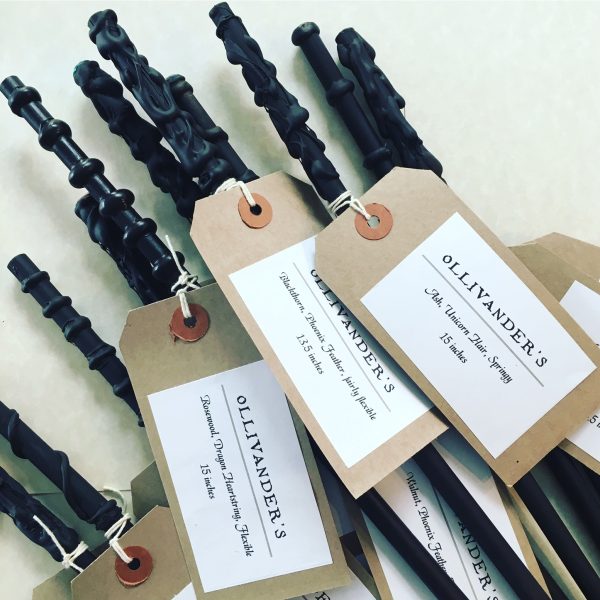 Once everyone had arrived we headed over to Diagon Alley where we had set up Ollivander’s wand shop. We made the wands ourselves and they were definitely the hit of the day – I have to admit I was impressed at how well they turned out. Here’s how to make them.

First, I gave the chopsticks a quick sand down and wipe, then used the glue gun to create texture and patterns at the (wide) handle end. The Harry Potter style wands were pretty easy to do, but the spirals and rings took a steady hand – Harry was actually better at them than me (and secretly quite enjoyed it), so I left him to it. We also added small jewels to the ends of a few of the less interesting designs. Once they had dried he sprayed them with a dark brown paint, let them dry, sprayed any missed patches, let dry again, then sprayed with a coat of sealant for added toughness. Meanwhile, I was busy creating Ollivander’s wand labels, detailing the length and make up of each wand, which you can download here. The finished article looked amazing. We, of course, had to let the wand choose the wizard, so we blindfolded the children and span them around before they picked a wand. They loved that each one was different and spent ages comparing the labels detailing what they were made from. 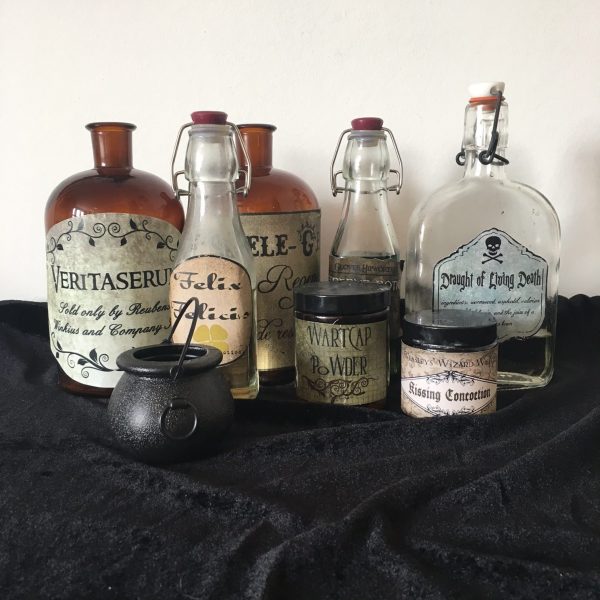 Alfie was fairly determined that we should have actual classes, so I chose Potions, Herbology, Charms and Care of Magical Creatures and based the main activities around those. For Potions, I found  some fantastic free printable labels online at Over the Big Moon, printed them out and stuck them to bottles (one of my friends lent me two fantastic huge old pharmacy jars and I reused my Seven Seventeen candle pots). I bought a mini cauldron for each child and Harry (a convincingly strict Snape) got them to mix ingredients (fairy liquid, bicarbonate of soda and vinegar) and cast a spell with their wands to produce impressively bubbling potions. For Herbology, we kept it simple they each potted a spider plant cutting in a pot, then created a label  and decorated a label from a craft stick. 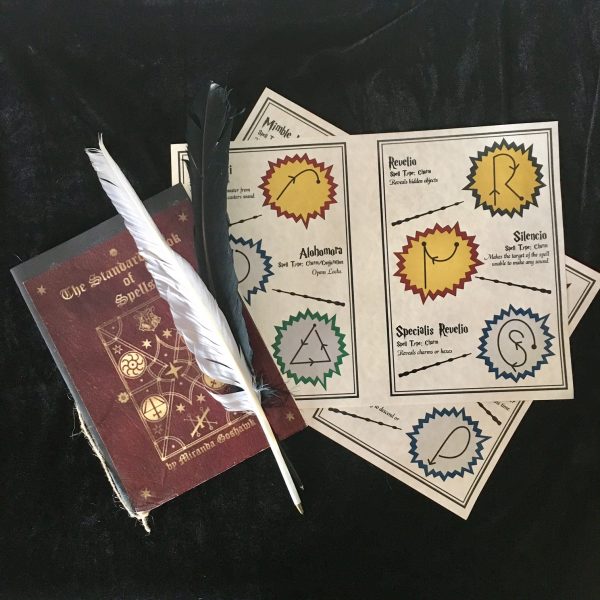 As Professor McGonagall, I took the Charms lesson, which involved making a spell book. Again, I found some amazing printables online – the Standard Book of Spells covers were free, and I bought the inside pages of spells and their wand movements from Etsy. We folded the sheets, stuck the covers onto card, then fixed them all together with twine. Care of Magical Creatures involved dragon eggs – the children covered plastic eggs with modelling clay, then added sequins and glitter to make them magical. 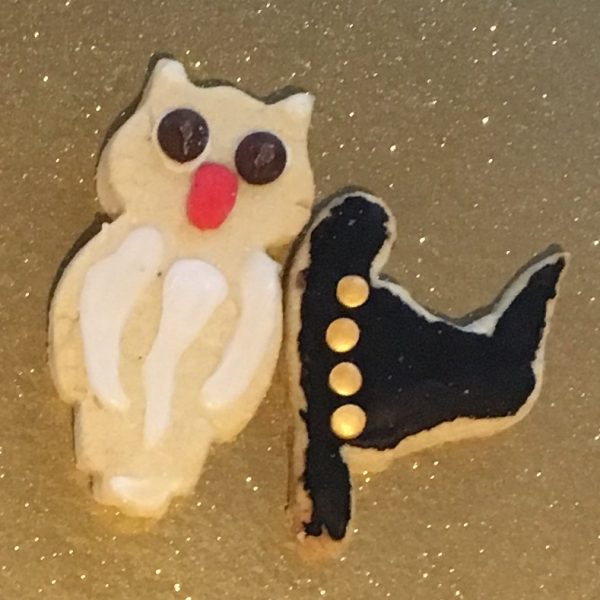 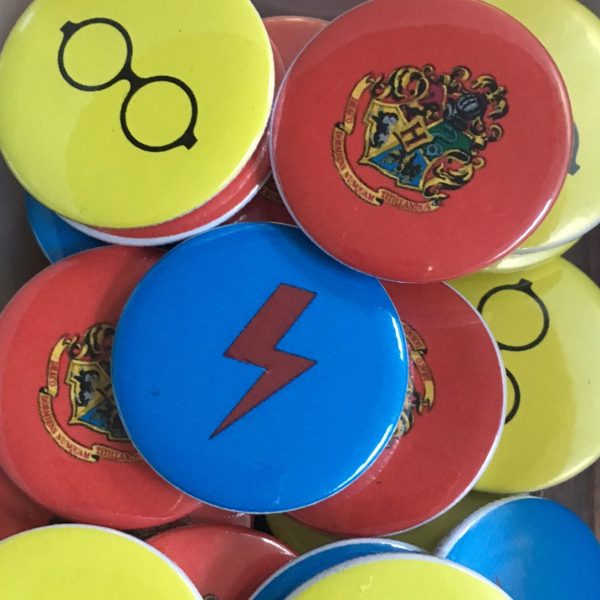 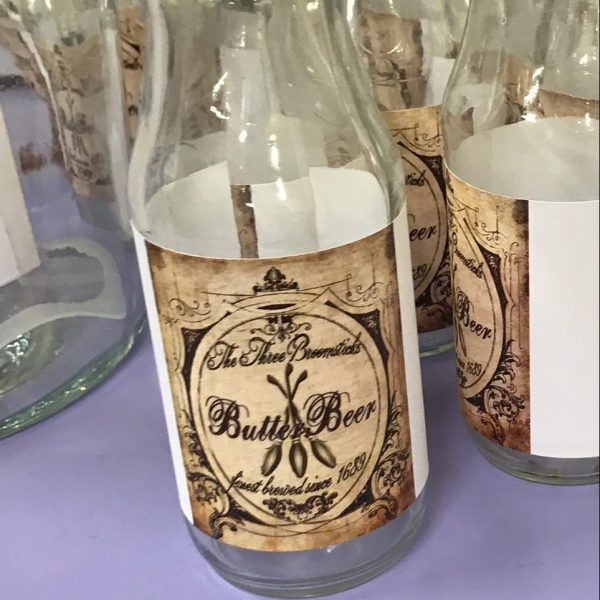 In addition to Hogwarts and Diagon Alley, we had The Burrow kitchen, where Mrs Weasley (my mum) helped the ‘pupils’ decorate owl and witches’ hat biscuits and Hogsmeade, where they could make badges at Zonko’s joke shop and sample butterbeer at The Three Broomsticks. I improvised the butter beer by trial and error – the final recipe was largely cream soda mixed with ginger beer and a dash of butterscotch syrup. Needless to say, it was a big success! They could also pick up a quill from Scrivenshaft’s quill shop – I bought lots of black and white feathers from eBay and added mini pen refills. As children completed all the activities, they were given a horcrux hunt (I had hidden the seven horcruxes around the hall before the party and written rhyming clues) to do in teams while we set up for tea. 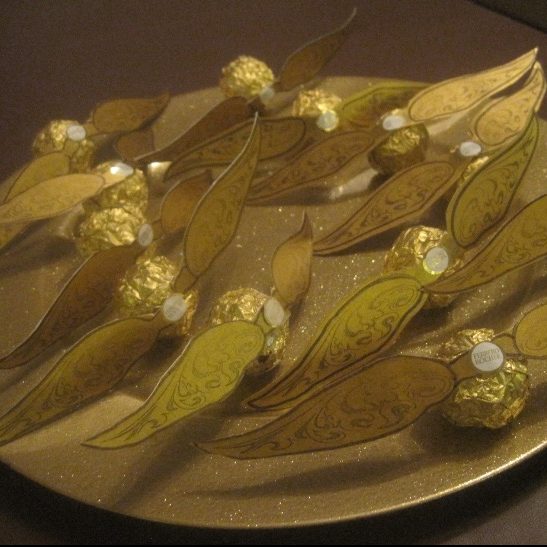 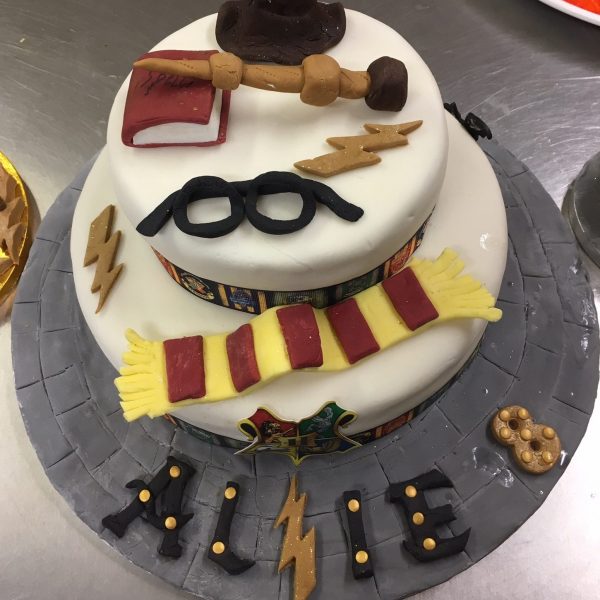 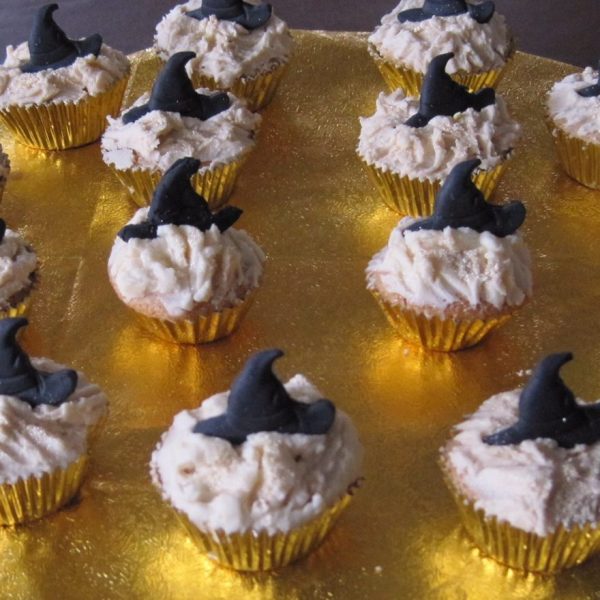 Finally, we adjourned to The Great Hall for birthday tea. We kept it simple with pizzas and nibbles, then brought out all my mum’s amazing creations – pretzel and Reese’s peanut cup broomsticks, cheese straw wands, gold dragon eggs in chocolate nests, sorting hat cupcakes, Ferrero Rocher golden snitches, and a fabulous two-tier cake with mini Hedwig, plus my dad’s cauldron of fruit. Party boxes were just filled with all the items the children had made over the afternoon (spell book, badge, plant, biscuit), plus their quills, mini cauldrons and, of course, wands. Probably the most enjoyed party we’ve done so far – by children and parents alike. And, just over a week later, on Alfie’s actual birthday, we did the Warner Bros Studio Tour, which was fantastic – a must for all Potter fans. 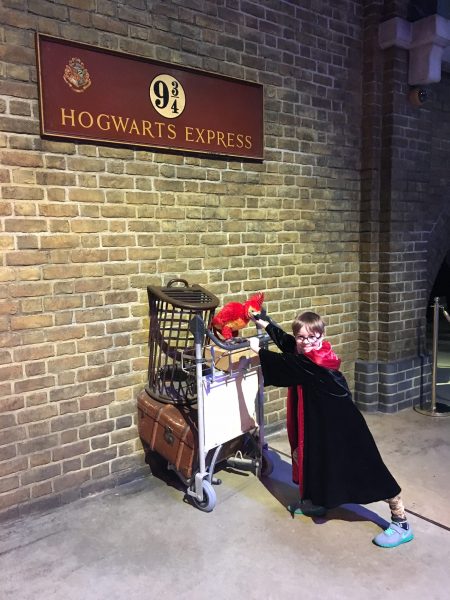