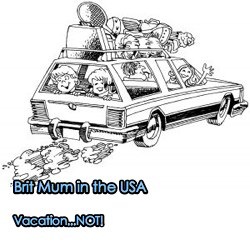 This week, Mothership, our Brit mum based in the US explains how family holiday’s can be like a stressful home away from home…

We are on our first ever ski trip â€˜en familleâ€™ in Colorado and whatever jokester coined the phrase â€˜family vacationâ€™ was obviously high as it is clearly a contradiction in terms.

I am completely exhausted, stressed out of my tiny skull and desperate to go home already and weâ€™ve only been here two days.

First off, we have done a home exchange with a very nice family, which should be a great money-saving venture in these credit-crunchy times. They are having a beach holiday at our house and we are having â€˜funâ€™ in the snow at theirs, cars included. However, my children have already broken several toys, a giant vase and a bed (a bed?!) and have to be watched like hawks every second to make sure they donâ€™t destroy anything else. They seriously arenâ€™t like this at home so I donâ€™t know where they got the bowl of crack from that they seem to have smoked on the plane ride over here.

Husband and I had to compose a list this afternoon of DIY supplies and replacement items (Superglue, screws, white paint, toy shop run etc) and we spent a hellish hour in Wal-Mart â€“ the ghastliest and most soulless of all US suburban superstores – trying to locate the right bits and pieces which only made the children wilder, grumpier and completely desperate for supper.

Like I said. Only day 2. By the end of the week weâ€™ll be in serious debt.

Speaking of supper, we keep meaning to cook â€“ after all, one of the beauties of having a home exchange rather than being in a hotel, is that we can make meals and thus save money. We did a big grocery store run on the afternoon of our arrival and Husband ambitiously stocked up on all sorts of organic meats and vegetables. Now, however, he has changed his mind and wants to go out every night because he canâ€™t be bothered to do any washing up (Hurrah! Hear, hear!). But I feel guilty about the slowly rotting carcasses in the fridge.

After Wal-Mart it became clear we needed to feed the beasties ASAP so we decided to head for a Mexican restaurant that had been recommended to us. We walked in and were shown to a table by a very nice senorita, but just as we were about to sit down I saw Four holding her nose ostentatiously and rolling her eyes. I asked her what was wrong and she said loudly

â€œNothing, itâ€™s just that the smell in here makes me want to throw upâ€

Next place; a steak house chain that she professes to like (goes there with the â€˜other babysitterâ€™ sometimes)

At this point Husband is beginning to lose his temper and I am considering giving the children goldfish crackers and chocolate milk for supper (Wal-Mart purchases, now in the trunk of the car). Four says she would consider pizza (really? Only for the 3rd night in a row?), so we head to a pizzeria nearby, also recommended by our host family. Four declares it acceptable so we allow ourselves to be shown to the â€˜kidâ€™s areaâ€™ which is a bare, tunnel-like room containing a plastic Wendy house, a Thomas train table with tracks and accompanying locomotives, several large, winking video games and a depressed looking father and little boy running around with a slice of pepperoni hanging out of his mouth.

My heart sinks to new depths â€“ It actually reminds me of the time I went to meet a lover in Paris and he forced me to eat at McDonalds (yes, that was the death knell of that relationship). Husband looks equally grim faced at the prospect of a meal in kid-hell. But actually it turns out all right.

The children are so entranced by the toys that they play happily for ages without disturbing us once. The pizza is surprisingly good when accompanied by several glasses of draft beer, and Husband and I can pretend, for a blissful hour, that we are on a real holiday.

Mothership is a former pop star, singer, composer, and writer from London who was abducted by aliens (a German one who promised chocolates and a cleaning lady) and brought to southern California to live in a small town by the sea with her son ‘One’ and daughter ‘Four’. Keep up with her escapades on her blog, Motherhood: The Final Frontier