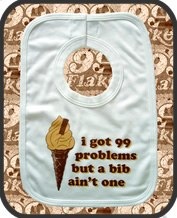 I’ve been a Jay-Z fan since the beginning of his career so of course I was watching when he appeared on Jonathan Ross on Friday and quickly knocked down Jonathan’s pitches to ‘duet’ with him. Jason Manford the very funny comedian was on before him and showed off this hand screenprinted bib by hip hop inspired, cheeky urban kids gear company Nippaz With Attitude (we’ve featured their alphabet essentials learning poster and also learning poster 2 and other delights).

Featuring the famous line from 99 Problems with ‘bib’ inserted and a 99 icecream taking pride of place, although we’re not keen on slogan gear here at BG, we always make an exception for stuff with att-i-tude. Â£9.99 each and relive those moments lurking by the window waiting for the icecream van and listen to the 99 theme tune on the site. A great gift at baby showers for the rebellious, hip hop loving parents amongst us.

Also check out Hip Hop Baby which features brilliant instrumentals of classic tracks including Push It, Gangstas Paradise, and Tupac’s I Ain’t Mad at Cha.