With our last Summer before Milla starts school stretching in front of us we’re planning to make it a Summer of good times. We will be hitting a couple of festivals as our kids thrive on the outdoor lifestyle and diverse entertainment. The only trouble will be narrowing down the selection, with so many high quality festivals catering for young families we really are spoiled for choice. Whether you’re looking to rock out, camp out or have a day out there is a festival for you.

Imaginate Festival Edinburgh and on Tour, 9th – 15th May

Imaginate is a festival of performing arts for children of all ages. The programme of events boasts inspiring and exciting performances catering for children from babies to teens. As it starts next week there are many events already sold out but well worth popping in the diary for next year if you miss out.

Wood holds a special place in my heart as it was the very first festival we took Milla to. The vibe is very chilled and due to its size it has an intimate feel. There are children’s workshops running all day Saturday and Sunday in the children’s tent ranging from yoga to willow sculptures as well as adult’s workshops including five part harmony singing (lots of fun). The food is out of this world provided by a local organic cafe and we enjoyed daal and wood fired pizzas. While festival toilets may be the frequent subject of eye rolling at Wood their composting loos are legendary (and far more pleasant than most festivals). I’m gutted to be missing this year as I like the look of a few bands on the list not least Polly and the Billets Doux who are also headlining at Just So Festival.

Few festivals can list swimming among their attractions but at Meadowlands you can swim in a beautiful outdoor pool over 100 years old. Children’s workshops include pizza making and poetry. I’m liking the line up in the comedy and spoken word tent as much as the music acts.

This comes highly recommended by Eve who contributes to Bambino Goodies with children’s theatre reviews. The festival is spaced over two weeks and has a whole host of pre-schooler performances including BabyO a first experience of opera for 6 – 18 months and Five a laboratory for the senses. There are also interactive events and art shows making it a packed programme. All events are reasonably priced and well worth heading over to Leicester.

Hat Fair is an institution bringing together the best street theatre from across the UK and Europe for a free three day festival. It is held the first weekend in July every year and sees acts performing in pitches all over the City. It is a fantastic event for children and a great way to introduce them to physical theatre and comedy. At the time of writing the programme has not been released but take a look at their website for last year’s acts which gives you a good idea of what to expect. If you want to find out more check out my mini guide.

Latitude offers a diverse range of arenas such as poetry, literary and children’s alongside it’s musical stages. There are activites, workshops and performances aimed at all ages as well as a dedicated toddler area with free sun cream. If you love They Might be Giants’ children’s music as much as I do you’ll be pleased to hear they will be playing a set on the Saturday. 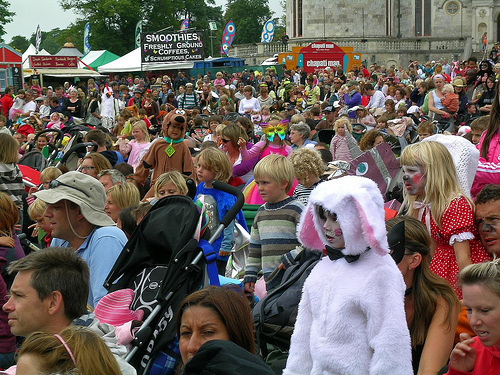 This is often billed as the most family friendly festival in the UK and with good reason. Every aspect of the festival caters for families and they even have a boutique babysitting service if you fancy heading for the music stages without the kids. I know Milla will be over the moon to discover the Royal Ballet workshops. Lucy went last year and had an amazing time, her write up sounded so good we booked early bird tickets then and there.

While it may not have a flashy website, Glastonbury Children’s Festival is tipped as a gem for children. For a ticket price of just Â£8 daily for children aged 3 – 11 you gain access to workshops, entertainment and rides. From what I’ve heard it regularly sells out so if you’re in the area snap yours up now.

In the heart of London you’ll be able to enjoy a weekend of activities and performances just for children. The live acts read like the CBeebies schedule with Zing Zillas and (the notorious) Rastamouse amoungst others performing on stage. Other big names include The Science Museum, Baby Loves Disco, Roald Dahl Museum and Mr Motivator (when did he make a come back?). Natalie will be there in the heart of it all reporting back for Bambino Goodies.

Even before having children, Green Man was on my radar as supremely family friendly. While it may not be packed to bursting with children’s entertainment it is widely attended by families who come for the friendly community atmosphere and relaxed music. 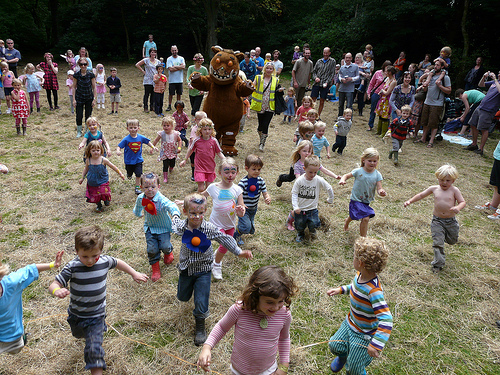 The Just So Festival made a name for itself when it launched last year, firmly setting out its stall as a festival for young children and their families. It has an enviable programme of events covering arts, literature, music, nature and physical activities. What strikes me as special about Just So is that it has many events which bring festival goers together from a lantern parade to traditional sports day races your children will be interacting with the community. Last year weekend tickets sold out quickly so if you’re tempted I’d click now rather than deliberate too long and miss out. Look out for more on Just So as Bambino Goodies will be heading up to check it out.

Mixing the traditional festival with a healthy dollop of foodie fun the Harvest festivals are right at the end of the season and the perfect way to celebrate the first week of school. Bambino Goodies will be rocking out at Alex’s where the kids can enjoy Charlie and Lola’s Bestest Play and Fantastic Mr Fox as well as wookshops, cookery lessons and nature activities. On the chef demo stage I’ll be looking forward to Hugh Fearnley-Whittingstall, Rachel Allen, Yotam Ottolenghi, Jay Rayner and friend of Bambino Goodies, My Daddy Cooks.