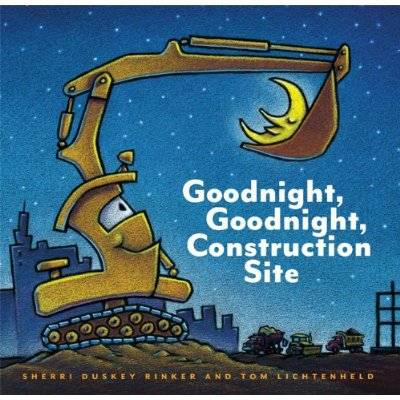 It’s all too rare that you happen upon a book everyone in the house loves. Goodnight, Goodnight, Construction Site (RRP Â£11, Chronicle Books) is one such rarity. This rhyming tale is utterly delightful and it’s hard to believe it’s author Sherry Duskey Rinker’s debut. It tells the tale of five vehicles (Crane Truck, Cement Mixer, Dump Truck, Bulldozer and Excavator) getting ready for bed after a hard day’s work.

The repetition of ‘Shhh… goodnight, goodnight’ after each vehicle character is hypnotic and a great wind down before bedtime. I don’t want to spoil the ending, but suffice to say Alfie loves being tucked in and turning off the light, which, let’s face it, has to be a bonus! And although it’s American, it somehow doesn’t feel it – in fact, in my husband’s words: ‘It’s so good it could be British.’ (No offence to our chums across the pond.)

The illustrations, by Tom Lichtenheld, are divine, and feature quirky twists – Bulldozer snoozes on a big dirt pillow, Crane Truck picks up a twinkly star and Cement Mixer is covered with a blanket – all realised in a muted retro colour palette. An adorable gift for any transport-loving youngster (and their parents).