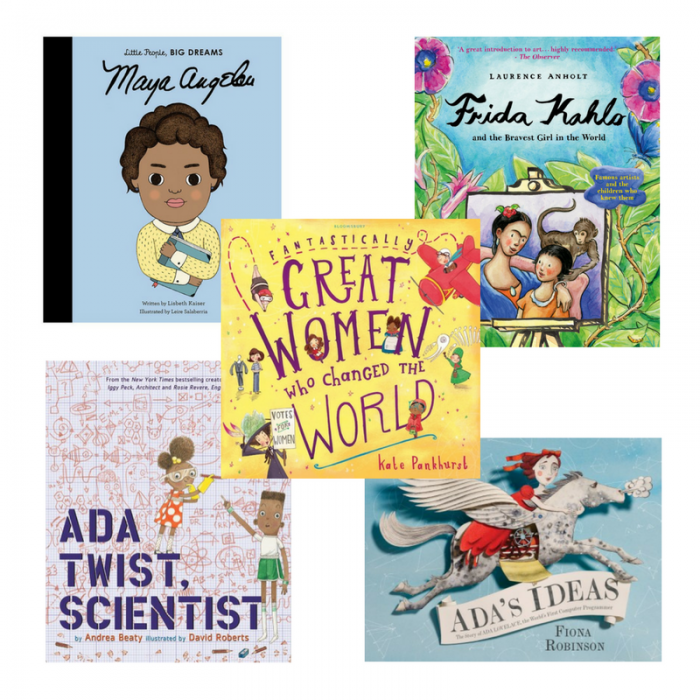 Feminism – you can’t start them too young – and I’m talking about boys as well as girls here. Thankfully, there are some brilliant picture books for children out there promoting strong women and exploring amazing female achievements. Here are five new ones to check out…

Fantastically Great Women Who Changed the World by Kate Pankhurst (Bloomsbury, RRP £6.99). Your one-stop shop for women with attitude and influence, often in times of adversity. The writer is a descendent of one such woman, Emmeline, who is included alongside scientists Mary Anning and Marie Curie, civil rights activist Rosa Parks, designer Coco Chanel and other, less well known figures, such as swimmer Gertrude Ederle and spy Agent Fifi, plus many more.

Ada Twist, Scientist by Andrea Beaty and David Roberts (Abrams, RRP £10.99). If you’re a fan of Rosie Revere and Iggy Peck, you’re going to love the latest inspirational youngster in the series, not least because you can spot Rosie and Iggy in class (Kitty loves doing this and looking back to spot Ada in the other two). Ada is an eternally curious child and is constantly experimenting and testing to try to her questions, most pressingly, ‘What is the source of that terrible smell?’ Fantastically inspiring with fun rhyming text that will appeal to all ages.

Ada’s Ideas by Fiona Robinson (Abrams, RRP £9.99). From one scientific Ada to another tells the story of the fascinating life of Ada Lovelace, the world’s first computer programmer (and daughter of poet Byron). Beautifully illustrated, this picture book chronicles the often unhappy life of a young girl whose fascination with mathematics and machines leads her to meet Charles Babbage and become involved with early computers.

Little People, Big Dreams: Maya Angelou by Lisbeth Kaiser, illustrated by Leire Salaberria (Frances Lincoln, RRP £9.99). I’m a massive Maya Angelou fan – I’ve read all her books and I read her poem Life Doesn’t Frighten Me At All at Kitty’s naming day – so I was excited to share her with Kitty. The book follows the poet and author’s troubled childhood and subsequent extraordinary life, accompanied by beautiful illustrations, with a timeline at the back.

Frida Kahlo and the Bravest Girl in the World by Laurence Anholt (Frances Lincoln, RRP £12.99). Get to know everyone’s favourite monobrowed artist in this beautiful tale about her friendship with a young girl who visits her at the Blue House to sit for a painting. The book contains lots of her famous works and introduces all her animals, which included an eagle and a spider monkey.