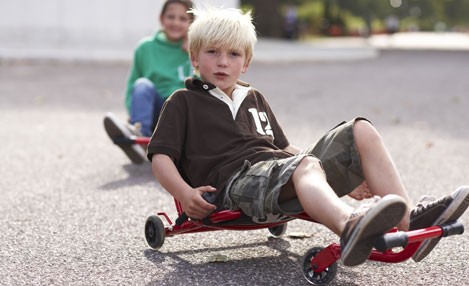 After seeing the EzyRoller in action at our toddler group fair last year I was seriously impressed. What at first glance looks like a modern go-cart is quickly revealed to be a self propelled low gravity vehicle.

The principle is simple (and was explained to me by a ten year old physics whizz), it works on cambering motion – as the front wheel is set back from the pivot, when the foot bar is wiggled from side to side the cart moves forwards. Sounds great in theory but seeing it in action is something else, the seemingly impossible movement is perfectly balanced and has the fine control of a bike. I watched children from 3 to 13 giving it a whirl around the village hall taking no more than a couple of seconds to get the hang of controlling their movement. It is designed for use on flat surfaces and, due to the low nature of the product, away from roads. It would be ideal for use in city parks or similar areas.

The nuts and bolts of the product are relatively simple; it has a strong steel frame, fabric sling seat, polyurethane wheels and an easy grip brake. The frame comes with three bars to extend it meaning that it is one ride on toy which will last from pre-school to secondary school rather than being outgrown in a couple of years. You can even buy an EzyRoller Junior with handle bars for younger children from 18 months.

Both the EzyRoller and EzyRoller Junior are available from Micro Scooters at Â£77.99 but are currently reduced by around 15% to Â£64.99 as part of their January sale which lasts until 31st January 2010.