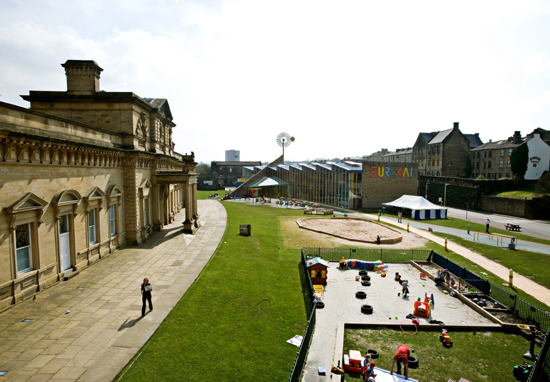 Given that it’s the National Children’s museum, it’s perhaps odd that we haven’t featured Eureka! before – but then, it’s located in Halifax, meaning it’s not necessarily on everyone’s beaten track.Â For us, holidaying in Yorkshire, it became clear it was going to feature on our agenda, even before we’d arrived: the train track passes right by, and in a very wily fashion, Eureka! have a brightly coloured playground and dragon in full view from the train. “What is…THAT???” breathed Tabitha, as we chugged past.Â Returning a few days later, we discovered that the tantalising playground we’d glimpsed is free to get into – and there was plenty to enjoy there. Tabs’ highlight was a garden path composed of many different textures, which you’re invited to walk around barefoot. 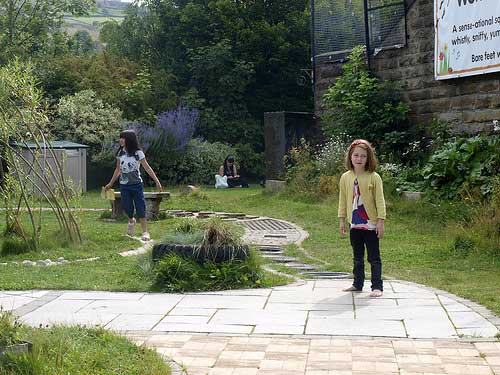 As for the museum itself, well, the stakes were high since our last science museum visit was in Amsterdam, to the much bigger and clearly more ambitious NEMO. Eureka! was smaller, less crowded (I really remember the noise and mayhem at NEMO), and just as hands-on. Sadly, it was also almost as expensive.Â A ticket is Â£9.95 for anyone over the age of 3 (Â£3.45 age 1-2 and free for those under 12 months) – you can queue up to convert this into a year’s season ticket for free, but that didn’t appeal as we are unlikely to return within that timespan. So it was imperative that we make the most of our visit. 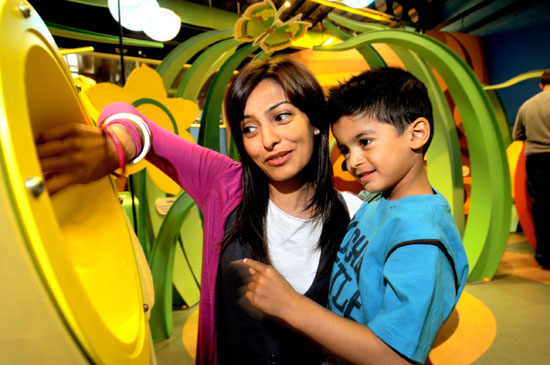 From Tabs’ point of view, it was well worth it. First off was the ‘town square’, where you can try out and learn about everyday things that we adults might find less than thrilling, but kids love to try: supermarket shopping, filling the car with petrol, and going to the bank.Â The ‘Sound Garden’ offered lots of door-opening and button-pressing, with a strong environmental message. 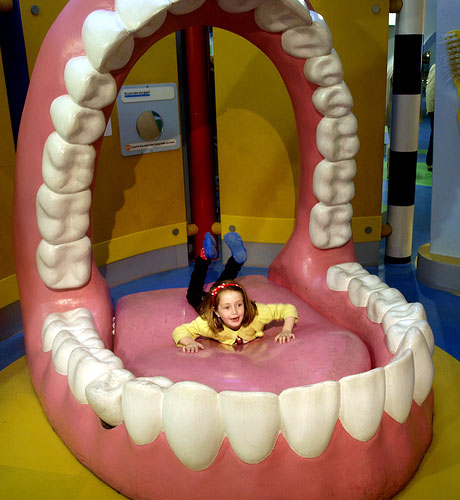 Upstairs, we discovered the part of the museum that took most of our time: ‘Me and My Body’. We were invited to record our height, reach, hair and eye colour, etc, and to learn about how babies are made, how food is digested, how the nose works, and more. At every step, Tabs could fill in a little booklet and at the end a simple computer programme told her how ‘rare’ she was, in terms of how many other visitors the museum had had that had her hair colour, eye colour, height, etc, etc. Fun!Â Tabs’ favourite exhibit was a huge mouth you could climb in (and slide down the tongue; not sure if that was entirely encouraged). 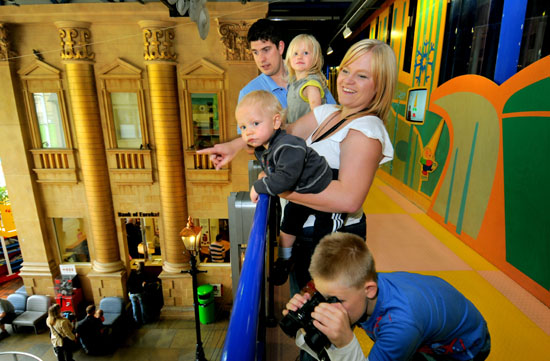 My favourite feature was that the interior signs were all by my absolute top children’s illustrator, Satoshi Kitamura (you’d recognise him from many, many books, perhaps most famouslyÂ Sheep in Wolves’ Clothing). I reckon they missed a trick at the giftshop: I might have found the entrance price a bit steep, but I’d definitely have shelled out a few more quid for a Kitamura t-shirt or the like. And my husband’s favourite thing was probably the cafe, where it was good to note there are many healthy options, a commitment to Fairtrade, and, that most important feature for us parents – a good cup of coffee.

My top tip: get there early; it was definitely more crowded as we left. But, to summarise – a great half a day (which could probably have lasted longer if we’d had more energy), easily accessible by public transport, and definitely a hit with the kids.

Images by Joan Russell, from the Eureka! press office, except those of Tabitha in the mouth and playground. All rights reserved.