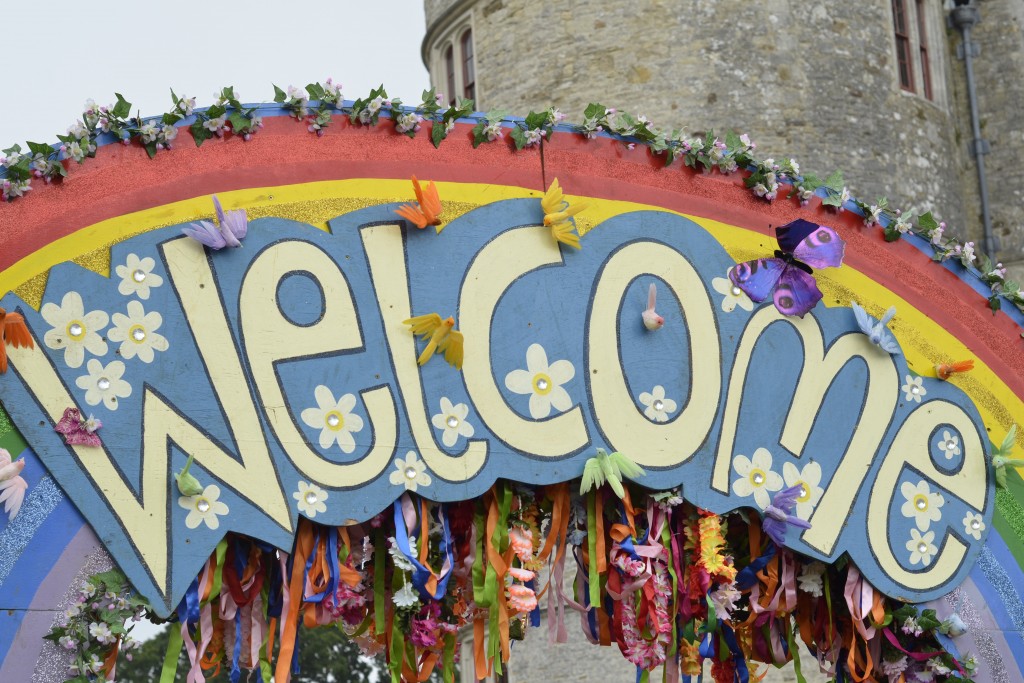 Now I’ve washed the last load after the weekend in children’s paradise that is Camp Bestival, I can tell you about it. In case you don’t know (where have you been?) it’s an annual four-day festival organised by Rob and Josie da Bank, the husband-and-wife creative team behind Bestival, held in the stunning surroundings of Lulworth Castle Estate in Dorset. We first ventured en famille in our campervan last year, when Alfie was one, and had an amazing time. This year, Kat and her tribe were also there and, miraculously given the lack of phone signal, we managed to meet up a couple of times. You can read her take on her experience over at Housewife Confidential. 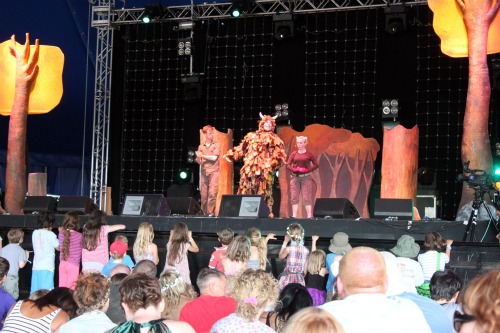 We were already looking forward to this year’s offering, but I have to say it was even better than expected. Firstly, Alfie got so much more out of it as a two-year-old. He was entranced by the performances – The Gruffalo Live (which we grown-ups also enjoyed), Zingzillas (adored by the littlies, but how excited can you get about four people in colourful monkey costumes miming?) and Mr Tumble (as always creating a frenzy on the Castle Stage) were all big hits. Because of the more accessible nature of the bandstand – at one stage Alfie climbed up on stage – and interactivity – lots of musical instruments, dancing and actions – the crazy Forestcreatures’ shows were really appealing to toddlers. 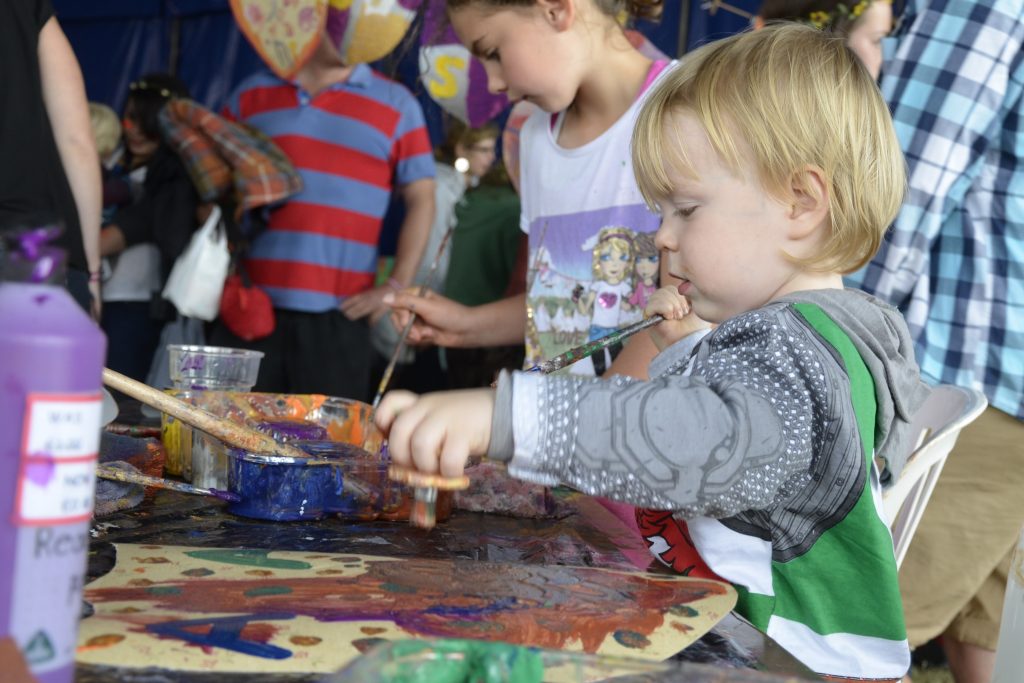 Activity-wise, there was almost too much for little ones to do. The whimsical House of Fairy Tales is consistently wonderful and well worth devoting an hour or two to, although they had some over-popularity issues this year and were turning people away on Sunday afternoon, which led to some disappointed faces. Similarly the frankly fantastic face painters (including the lovely Nam Nam who does Alfie’s birthday parties) faced (sorry!) huge queues. The art tent was great, with medieval-themed projects including a collaborative castle, shields and horse-head hats, plus embroidery and bag decoration. Most things were free, but there was a small charge for the bags. The English National Ballet ran classes again, which Kat’s Milla and our campervan neighbours’ daughter enjoyed. There was dressing up (plus a catwalk to model on), soft play, a toddler toys and games area and the chance to practise your circus skills. It’s no wonder he’s been exhausted since we’ve been back. 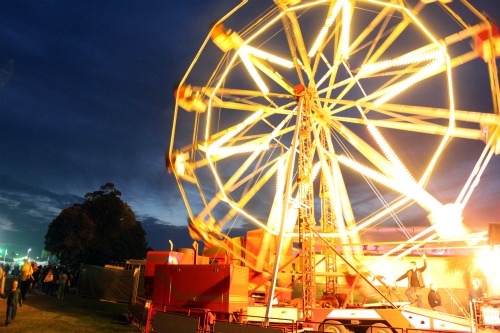 Come dusk you could barely move for the number of wagons, carts and wheelbarrows (!) containing sleeping, ear defender-wearing children. Most of them are pimped up in some way – watch this space for a further post – and our Radio Flyer was no exception, although we eschewed traditional canopies (there were lots of the Ikea leaves, which I thought was a nice touch) and fairy lights for a strip of blue neon underneath, boy racer style, which afforded Alfie’s wheels many an admiring glance and comment. 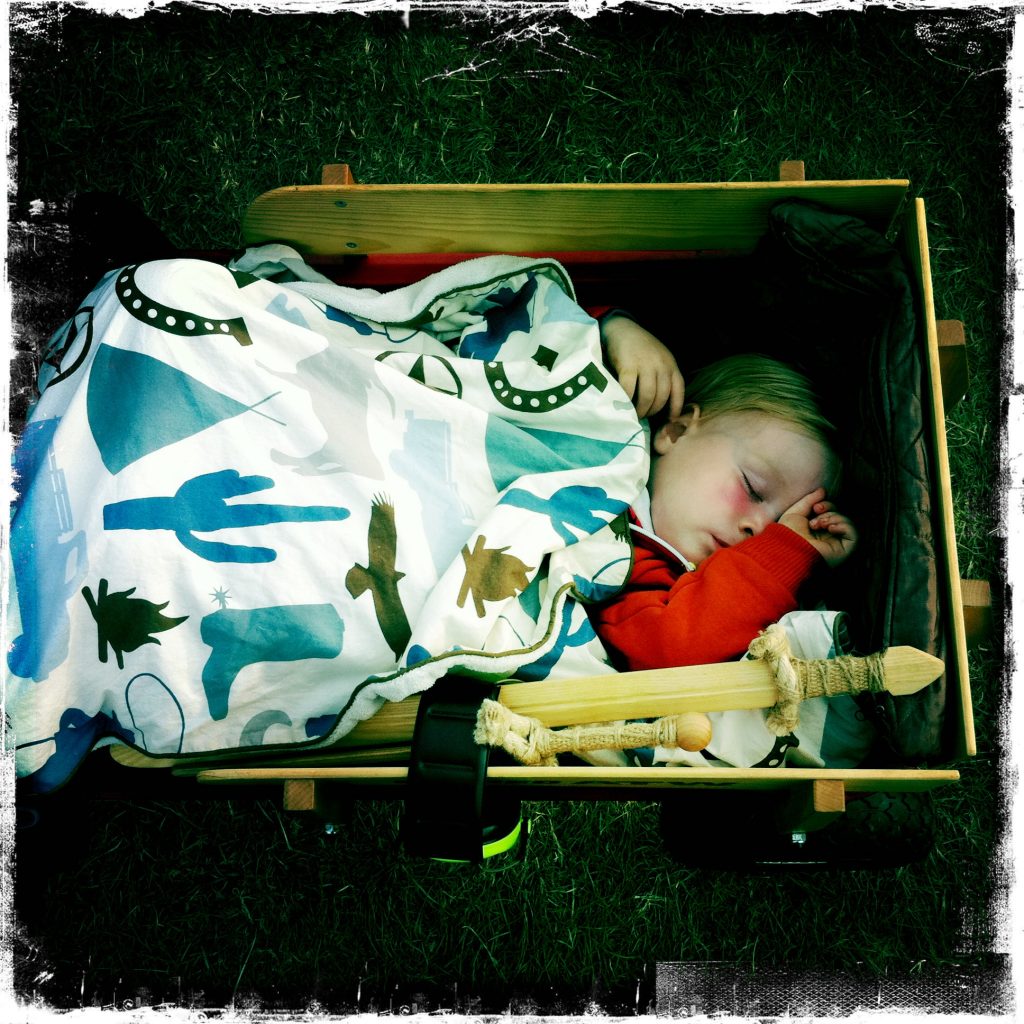 For older children, Dick ‘n’ Dom provided bogie-based nonsense, Tiffany Stevenson compered an entertaining comedy for kids session in the Little Big Top that we sat in on, with most of the laughs at the expense of mums and dads, there was a plethora of silent disco and karaoke fun, films, fairground rides and the Freesports Park offered the spectacle of pro skateboarders and bikers, alongside DIY options. Come Dancing classes in the Black Dahlia Tent gave kids and adults the opportunity to learn lindy hop, ballroom or breakdance, then compete against fellow campers. As usual, the Lost & Found crew and Bestival Bluecoats brought bizarre games and competitions to the party, including the legendary binocular football. If you were after the weird and wonderful, The Dingly Dell Trail provided the right balance of intrigue and quirk.Â And although we didn’t get the chance to go in, the KaleidoFish was being talked about everywhere. Another popular pastime was collecting empty cans and cups which could be returned to checkpoints for a small amount of cash. An ingenious way of encouraging kids to recycle, while also providing them with their own pennies to purchase festival essentials such as bubble wands and flower garlands. 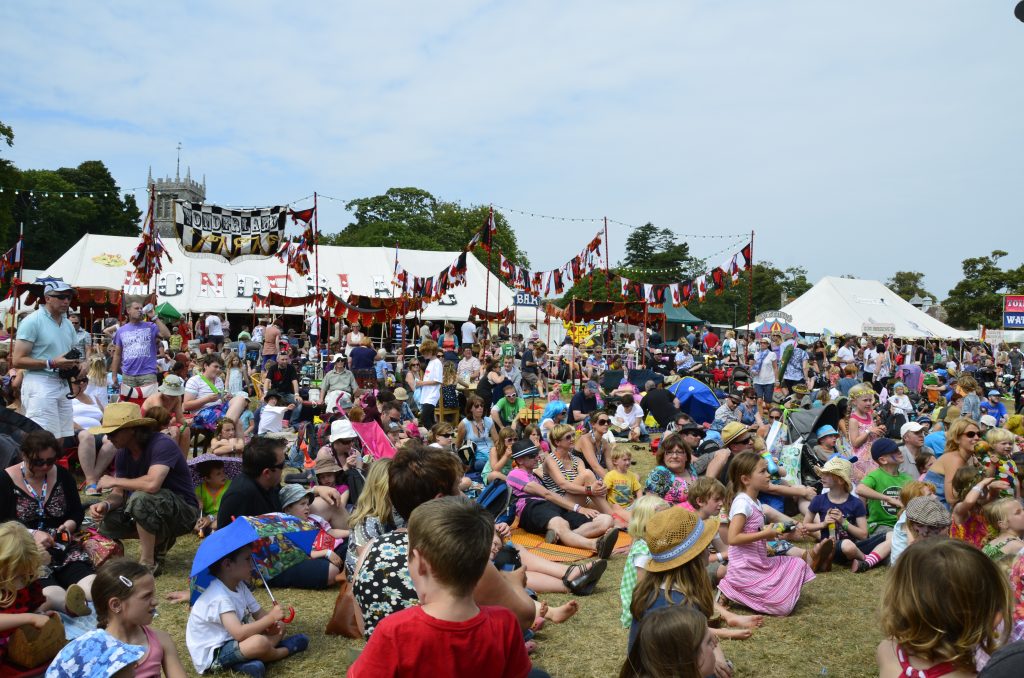 But what of the parents? Well, my musical highlights were Primal Scream, Mark Ronson‘s Amy Winehouse tribute, Â folk band Skinny Lister, who got the crowd (of all ages) dancing at the bandstand and DJ Yoda. Â Harry got to go out on Friday and thought Blondie were fantastic and was a huge fan ofÂ Adrian Edmondson and the Bad Shepherds‘ folk covers of punk standards.Â I also love the Jaipur Kawa Brass and Circus, having seen them perform before – colourful and loud, they were also a hit with the youngsters. I saw some great comedy in the East Lulworth Literary Institute when I ventured ‘out’ on my own on Sunday night and Howard Marks reading bedtime stories is a sight to behold. 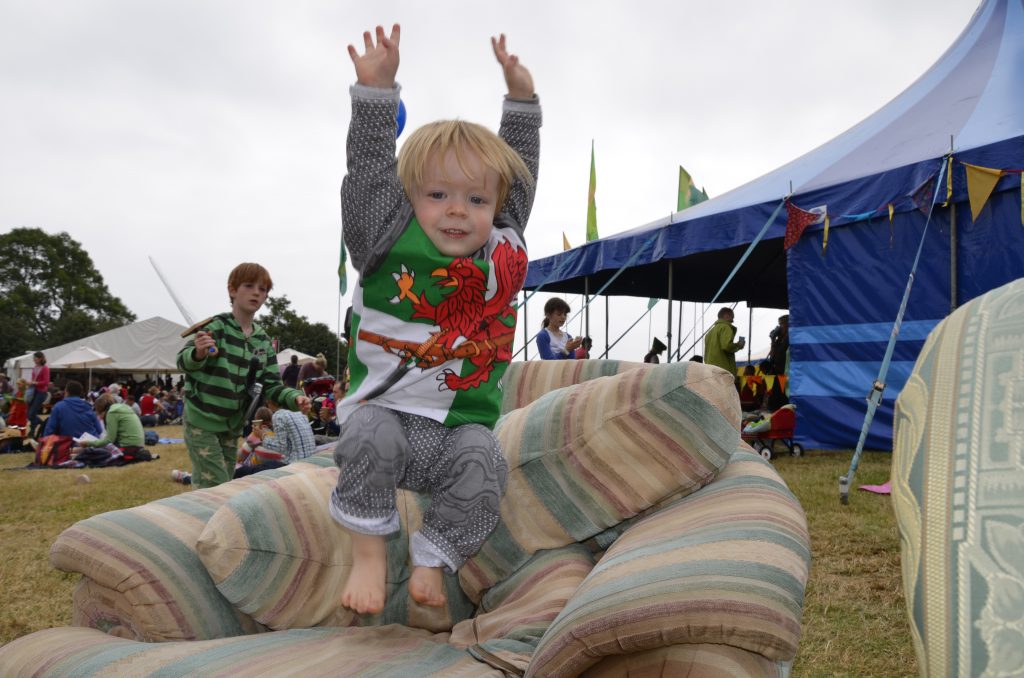 Once again, the facilities were brilliant. Portaloos were kept clean and equipped with paper and hand sanitiser and the compost toilets were regularly checked and even offered mini child-sized cubicles, an ace idea to avoid queue accidents, although I rarely found I had to queue other than in the main field. If I had one criticism it would be the lack of showers – there were none in the campervan field and, as far I as could ascertain, only one set in the general camping. But this is just a tiny quibble – as we know, most children love going without a wash for a few days anyway. I know it’s easier to keep clean when you’re not sleeping in a tent, but we all made do with wet wipes and it wasn’t too grim. The campervan field was superb, with large pitches marked out by mown grass. We have a huge awning and there was still room for us to sit in the sun and friends could have camped in the space too. The camping Â field looked less spacious and Kat and other friends pointed out that it was already crowded by Friday morning, so opting for the additional Thursday night if you’re in a tent is definitely a good idea. 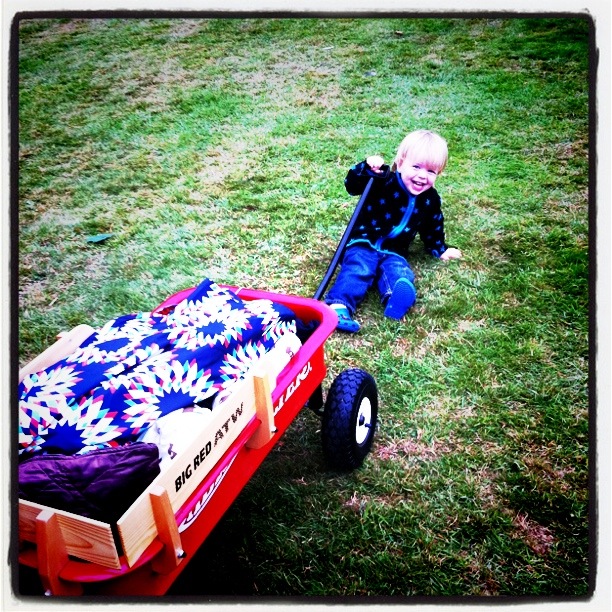 In terms of food, we tended to cook breakfast in the van, eat lunch out, then return to our camper for tea before heading out again. There are many food outlets, the majority good and lots of healthy options. We loved the River Cottage canteen again – wood-fired oven-baked mackerel, beetroot houmous and grilled mushroom were all delicious. The Kids’ Kitchen with its mini Ikea furniture was pretty good – Alf devoured the macaroni cheese with relish. Lots of familiar names were in evidence, from Pizza Express and Sea Cow to the WI and Gizzi Erskine, and there was a farmers’ market if you wanted quality local produce to create your own feasts back at camp. I can honestly say it would be hard to have much more fun with your kids of a weekend – it’s a really relaxed, friendly atmosphere and there’s none of the ‘edge’ you might feel about taking a child to other non-specifically child-friendly festivals. Alfie hasn’t stopped talking about it. Early bird tickets, which include a payment plan, generally go on sale the weekend after the festival, so get in quick for next year. We’ll see you there!