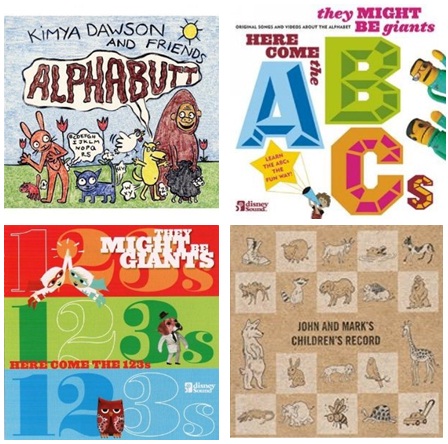 I could talk all day about the kind of children’s music I don’t like but where is the fun in that? What I love is playful, imaginative, fun music written for children by talented artists who respect the capacity of children’s musical appreciation. Here is a small collection of records for children which are just as appealing to adults.

Kimya Dawson is a hugely popular anti-folk artist who hails from New York. Her recordings are uniquely intimate and feel very much like she is in the room with you. Alphabutt is a wonderful collection of acoustic songs written both before and after the arrival of her daughter. The songs feature plenty of involvement from children and are playful and catchy. We are very fond of Smoothie and I Like Bears as well as the title track Alphabutt. It is worth noting that if you’re not keen on words like fart this might not be up your street!

They Might Be Giants are the slightly crazy band from the late 80s / early 90s who penned the epic Birdhouse in Your Soul (possibly my favourite of all time). They have released several children’s albums all of which are superb from beginning to end. With a pre-schooler who’s interest in letters and numbers is growing by the day we are currently enjoying Here Come The 123s and Here Come the ABCs not only are the songs amusing and engaging but there are a range of videos which you can find on You Tube.

I spotted John and Mark’s Children’s Record on Kickcan and Conkers and was instantly in love. The kooky melodic Counting Error from the record had me hooked and as soon as my iTunes is working again I will be downloading it. John and Mark are band mates in The Cocktails and the fathers of six children between them. They took inspiration from their children and this record is the result.

I am sure I’m not alone in my fond rememberings of watching Sesame Street as a child. I love their crazy songs and my daughter is also a fan. Nothing like a two minute visit to You Tube to find some Sesame Street magic to cheer her up. Songs from the Street: 35 Years of Music is a three disc box set of the songs from the show and includes some of the cameos from super stars including: Paul Simon, Stevie Wonder, The Pointer Sisters and The Fugees. The classics include the theme, Lady Bugs’ Picnic and People in Your Neighbourhood. It has a massive 63 songs in total and is on our wish list! 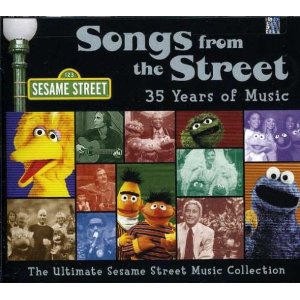