A couple of weekends back, BG HQ headed off up t’north to stay at Ribby Hall Village, a five star family holiday centre on the Flyde coast, based near Lytham St Anne’s which is about ten minutes from Blackpool. Set in an open space in picturesque countryside, Ribby Hall Village is literally a self-contained village with a soon to be launched hotel, plus holiday cottages, a spa, and apparently some peeps even live there all year round, as well as horses (with riders) and ducks walking about. Aesthetically, it’s a cross between Wisteria Lane in Desperate Housewives and The Truman Show with a cross section of farm.

Reminding me immediately of all my childhood summers spent at Brittas Bay in Ireland (for the beach aspect, they’re all within 5 to 10 minutes), one of the immediate things we noticed is that everyone (guests and staff) is really friendly which immediately gets you on the holiday buzz plus it could be the whole Northern dry humour thing, but we were often clutching our sides with laughter – the staff at the Island cafe and The Bar & Grill are a comedy act in themselves! 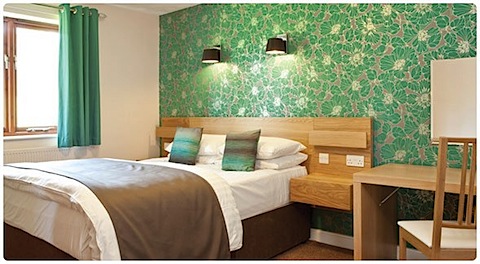 When you arrive, there’s a long (OK barely 5 mins but you feel it after a days activities) stretch of drive which will become your walk back to your accommodation. There’s several style and size of cottage to choose from (we were pea green over the Scandi style wood lodges) and we stayed in a ‘Poppy’ which are recently refurbished single mews. With an open plan kitchen, diner and sitting room with flatscreen, DVD player etc, ours had a double and two twins, an eating area in our ‘back yard’ where the ducks came to hang out, and plenty of space. We loved the en suite in our room which reduced on toilet fiascos and waiting around and the beds were great. You can park your car outside plus there’s close by car parks for second cars.

I think our only criticisms of our lodge, are that the L shaped sofa is a little on the small side for 6 people and if they invested a little more in the details (stainless steel instead of plastic kitchen accessories), that would seal the look. 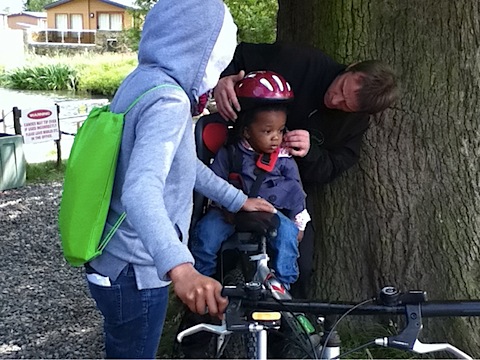 Activities wise, we had a blast. Get thee to The Island, which is where you can arrange to go out on a pedalo, hire bikes, play mini golf, ride those pedal buggy bikes, go on canoes, rowing boats, drag yourself up the climbing wall, or go on a pony trek. They have bikes with seats for mini peeps, as well as caddy’s to tow behind you and we had a great time cycling all over the village. Mini golf was brilliant and got quite competitive even with Nia (2) losing her temper with her plastic golf club. The boyf went off and played 9 holes and said it was good but a small course and the sailing on the pedalos around the picturesque lake was hilarious although the boyf drowned his iPhone… Beware – your bum will ache the following day and you’ll give your legs a work out with all the pedalling. Our only pointer for The Island is that they need to be more knowledgable about bike sizing “Right, he looks about X size so he’d be more suited to Y bike” as we had to change a couple of the bikes twice.

They have a spa and gym (we didn’t get around to visiting) as well as a large swimming pool (couldn’t get the boyf and our friend off the slide and think at one point they got stuck), an actually likeable soft play area (words I never say), as well as a nature trail which they give a great goody bag for. As a measure of how exhausting the activities are, Saria’s godmother and I fell asleep…at 4.30 pm in the bar. 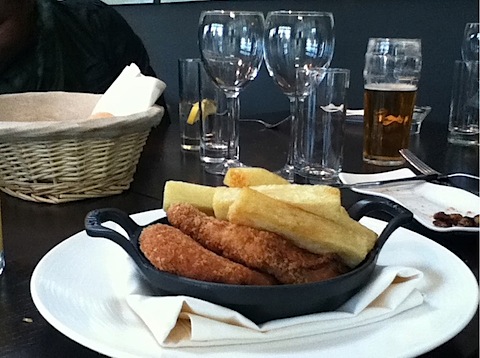 The first night we ate at The Bar & Grill, which has a disco and entertainment for the kids which is the type of thing that scares the boyf and I. The kids loved it – didn’t see them for dust! We weren’t crazy about the food which is your usual average almost fast food fare that you get at these types of places. This was more than made up for on the second night when we ate at The Restaurant which is their posher eatery. The boyf had this unbelievably tasty Morrocan spice hake fillet dish that we were all jealous of and the kids meals of fish/chicken (pictured) and chips were very tasty like gastro pub food and I devoured a good steak. Great atmosphere (we missed the jazz singer the night before) and certainly for a weekend stay, I’d try and squeeze in two visits. We had breakfast at The Bistro on our last day – really tasty but healthy fry up. Much fun as we had at The Island Cafe, it was a little too greasy for us.

There’s loads of amenties including a well stocked and well priced shop that doesn’t have rip off prices (tick), a couple of outdoor play areas that we couldn’t drag the kids away from (tick), a few bars (tick, tick, tick), your usual Starbucks and brand name fast spots, and there’s also a creche.

Funny moment: Saria calling her dad while riding one of those indoor rides and next thing we hear a guest telling her “Daddy will be with you in a minute. He’s busy watching Shakira.”

Overall, we thoroughly enjoyed ourselves and I think that it’s a great balance between activities and chilling and as it’s not on an overwhelmingly large space, everything is within a 5-10 minute walk within the village.

Prices start from Â£11 per night per person and with lots of accommodation styles to choose from (get a Scandi Pine lodge!!!) and they’ve currently got several special offers on, so you can get a deal if you’re planning a staycation. Most activities are extra including the gym and sports facilities but stuff like the pool, soft play etc are included in the price. You can also call 0800 085 1717 for more info or to make reservations. 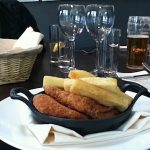 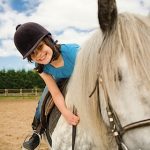 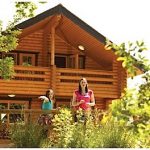 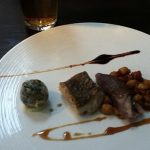 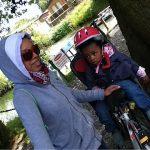 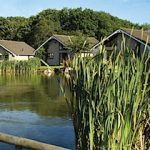 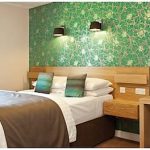 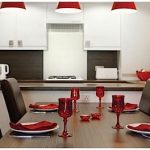 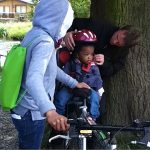