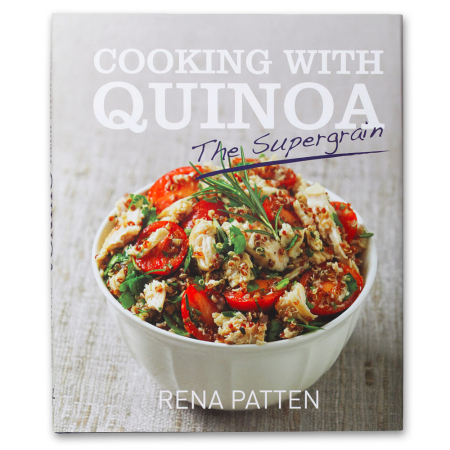 When I gave up wheat nearly four years ago (I’m intolerant and as soon as I stopped eating it, my vertigo vanished), people drove me batty with their recommendations that I should eat porridge and how it was a slow releasing food and yada yada yada. Me, I eat porridge and within a couple of hours, I’m hangry (hungry and angry) – it just doesn’t work for me. I know I’m not alone in my meh-ness about porridge and also that there are a lot of BG mamas and papas out there that don’t eat wheat either, and it’s not because we’re being faddy!

Thanks to Pinterest, I kept finding great recipes for quinoa (pronounced ‘keen-wah’), a supergrain that’s lauded as a complete food, containing more protein than any other grain amongst it’s long list of benefits but its also gluten and wheat-free plus, it’s an all round food that can be used from breakfast through to dinner and looks fabulous whatever you make it with. It has a slightly nutty, comforting smell and is really flavoursome.

I picked up Cooking With Quinoa: The Supergrain by Rena Patten (New Holland, RRP Â£14.99) at Oliver Bonas in Victoria station – that place is dangerously tempting to my purse! Packed with ninety recipes that won’t tax you and will even give you the impression that you’re a very creative cook (cough), it’s made me look forward to lunchtimes – I know I’m not the only parent who struggles to give themselves a decent lunch as they’re too busy trying to knock out their to-do list before the nap ends or it’s nursery or school pick-up time…

The salad recipes are fantastic – my favourite is the Mexican corn and red kidney bean salad – plus there are recipes for making bread and pasta – there is such as thing as quinoa flour. My two girls (5 and 7) are quite keen on quinoa and I’ve just snapped up Quinoa For Families which focuses on big typical family meals with a quinoa (instead of wheat) twist.

Cooking With Quinoa has become my go-to recipe book. Hot tip – have a batch of quinoa cooked and stowed in the fridge as you can quickly throw together something fabulous and nutritious.