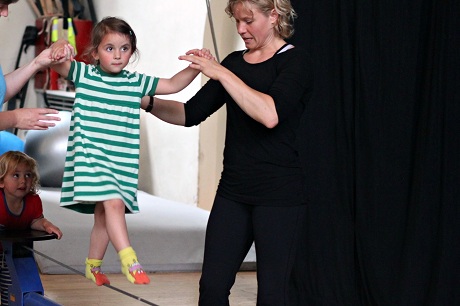 My children are circus obsessed. They talk of our visits to Giffords Circus, stage shows and have a troupe of goats and horses that follows us around where ever we go. Really. So when my buddy found a family circus skills class atÂ Circomedia for children aged 3+ we just had to take them along.

The family workshop session began with some warm-up exercises then moved on to a group lesson on juggling before everyone was split up into three groups who rotated between the three apparatus: tumbling mats, tight wire and trapeze. 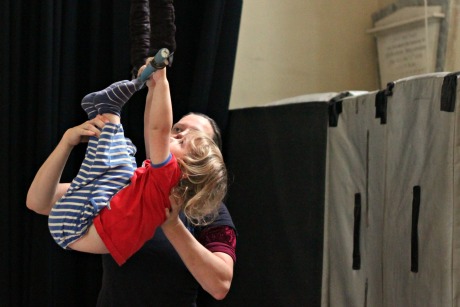 Milla, aged five, took to the tight wire and trapeze with gusto. Monty, aged three, found them a little more difficult and the height of the trapeze was a bit much for him. Both found the juggling hard but fun especially as one of the instructors worked with them on some more simple techniques.

The one disappointment was the tumbling mats. The instructor seemed mostly interested in working with the adults. He had the children do roly polys for twenty minutes with the only input being to direct them to do two in a row. One child did so many roly polys they threw up. Really. It’s a real shame as most of the adults said they were there for the children and I know Milla for one would have loved to work on handstands, cartwheels, clowning or anything but endless roly polys.

Despite the roly poly thing they had a great time. In two hours they had a good taste of the circus and enjoyed

Circomedia is based in St Paul’s Church in Portland Square, Bristol. The space is a permanent circus school which provides classes for all ages. They run a range of classes for children including term-time after school and holiday play schemes.