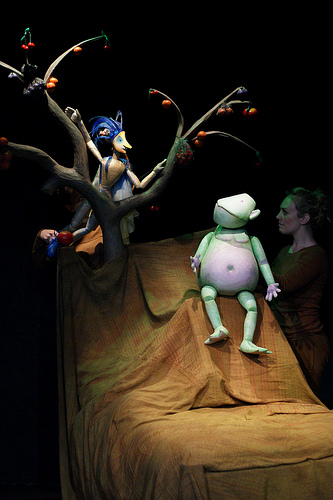 I’m Â on a one-woman campaign to encourage my family to love Shakespeare. Last month my husband and I went on a rare child-free day out to the Old Vic to see the wonderful Kevin Spacey as Richard III. He (my husband that is) dismissed it as ‘boring’ and ‘wordy’. I might divorce him soon. Luckily when I took my son to see The Magician’s Daughter this weekend, a sequel to The Tempest, he didn’t let me down. In fact he declared it ‘very good … even though it was a little bit scary in the middle’.

The show, written by legendary children’s author Michael Rosen and adapted by Little Angel Theatre and the RSC, is a 40 minute gentle introduction to some of the bard’s characters and his way with words. Almost entirely in modern English with a smattering of Italian thrown in (the audience loved counting ‘uno, due, tre’ with Miranda) there were also a handful of Shakespearean words and phrases, most notablyÂ ‘aÂ thousand twangling instruments, will hum about mine ears‘. Far from being put-off, my just four year old was enthralled by the language. I don’t blame him, twangling is a brilliant word.

Following the usual children’s theatre ‘live action and puppets’ model, The Magician’s Daughter tells the tale of Isabella, granddaughter of the legendary Prospero, who goes on a quest to find her Grandfather’s magic staff to stop the endless rain spoiling all of her fun at home. The show rockets along, switching seamlessly between familiar nursery rhymes (‘rain, rain, go away …’), a sort of rap in which the two main characters sum up the story so far, musical instruments from a squeezebox to hand bells and some good old fashioned magic tricks. All brilliant fun, but it is scary in parts. There are periods of darkness, and the voice of the disembodied Prospero had Torin, and our neighbour in the next seat, scurrying onto Mum’s knee for reassurance. Well worth bearing in mind if you have nervous little ones. 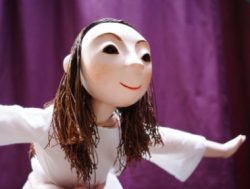 Overall though, The Magician’s Daughter is utterly charming. The characters interacted with the audience, using the central aisle as an extension of the stage and talking to some of the watching children, and there was plenty of opportunity to join in by chanting simple words and phrases. The staging is really creative, although some of the magic of a spotlit spinning chest effect was lost by the fact you could clearly see a hand pulling the string to make it go!

The production company recommend the show as suitable for over threes. There is plenty to hold small children’s attention, especially the comedy magic staff (which bears more than a passing resemblance to Julia Donaldson and Axel Scheffler’s Stickman) but the story is fairly convoluted, despite the creative summing up, and I think fours and over would truly get the most out of it. I found myself whispering what was going on into Torin’s ear at five minute intervals. Rosen is the master at writing for children. This is definitely noÂ Bear Hunt, butÂ If you’re after something a little bit different do give it a try. We’ve done baby opera and now pre-school Shakespeare this year, and my children have surprised me by loving both.

The Magician’s Daughter is on tour until Christmas. We saw it at the brilliant Nottingham Lakeside where tickets were Â£6 and you can find dates near you on the Little Angel Website.

My best bit: The magic tricks.

« ESP no.1 at Couverture
By Graziela train nightwear »