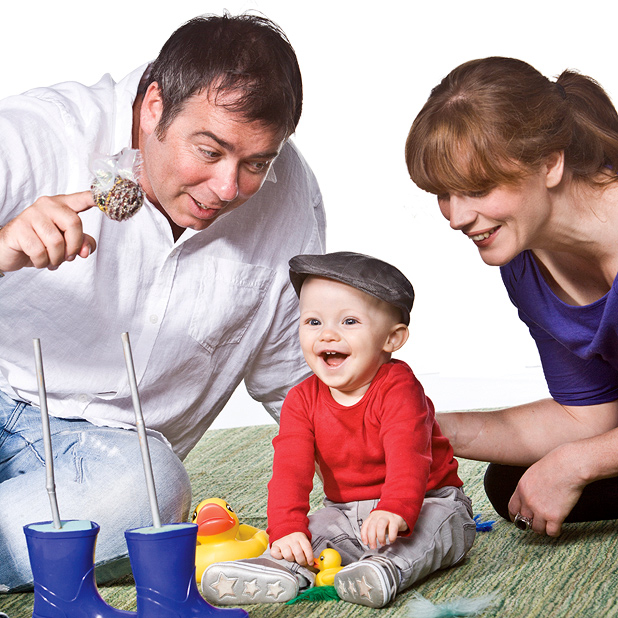 There are a couple of traditionally ‘adult’ things that my children seem to like. Eating olives for one, staying up late for two but opera? I wasn’t so sure, until we went to see Scottish Opera’s fantastic offering for babies, the aptly namedÂ BabyO.

Nineteen month old Cora and I joined around 20 other parents and babies in a ‘secret garden’ of circular squishy green seating. This is a show best suited to under 2’s so Daddy and Torin spent the half hour duration kicking a ball around the park up the road.

I wasn’t sure what to expect. My previous experiences of opera have been both very loud and in Italian, but this was the polar opposite! Three singers (a soprano, mezzo-soprano and a baritone, that’s high, medium and low voices to opera novices) gently introduced the little ones to songs that were accessible but still decidedly operatic. With a cast of props that included rubber ducks, silver fish, a bouncing frog and a giant gold present they moved the mood from gently relaxed to super excited.

Babies had to remain on laps for the performance, which in the intimate setting proved a bit of a challenge for the cruising and walking babies amongst the audience, my daughter included, but whenever possible the performers encouraged interaction. A bumblebee landed on Cora’s foot, and we were all given a rubber duck to hold, swapped at the end of for a CD and handful of feathers, enabling us to recreate the ‘falling, falling … bump!’ song at home.

The cast were wonderful, quick to smile and make eye-contact with the babies, especially if they were getting wriggly, instantly re-engaging them with the performance. They nodded and acknowledged when the verbal babies shouted out the names of the animals. All of this without missing a note. All three looked genuinely pleased to be singing to the group. Cora was entranced by the baritone, Alan McKenzie, whose voice vibrated so deeply you could almost feel as well as hear it.

Half an hour was just about long enough for the babies, many of whom were under one, but I found myself genuinely disappointed when the cast curled up under the blankets and went to sleep at the end of the show. There’s something wonderfully soothing about operatic singing, it really is good for the soul. And don’t just take my word for it. Not one of the babies present cried. That’s got to be magic!

My favourite bit: The wellies song. I am going to sing this every time my children put on their boots!

We saw BabyO as part of the Spark Children’s Art Festival in Leicester. If you’re North-West based you have a chance to see the same show for free next month as part of the Manchester International Festival. Music Boxes, currently under construction at MediaCityUK in Salford Quays,Â is a mini landscape of shipping containers home to a barrage of musical activities for babies and children up to the age of seven. It’s no surprise that tickets are going fast but they are still available (there’s a nominalÂ£1.50 delivery charge). BabyO is on the yellow pathway for under twos. We’re off to Music Boxes soon, look out for our review!

If you live elsewhere, check the BabyO website for more dates soon.