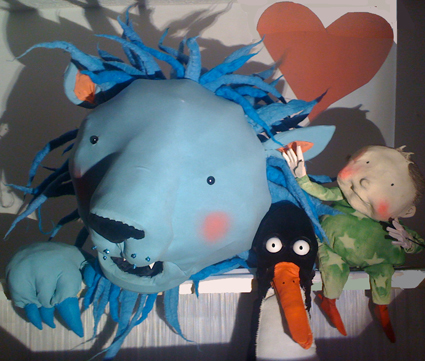 Last week Lucy posted about the Imagine Festival in London. A cool spot for parents and little ones in the capital.Â  One of the highlights is a performance of Polly Dunbar’s Penguin by Long Nose Puppets, but don’t despair if you don’t live in the South East, the show is also on tour this spring and is well worth seeing if you can get to one of the dates.

Stage versions of children’s books are big business now, with everyone from The Gruffalo to Stick Man getting in on the act. We’ve been lucky to see a variety of shows, but Penguin has to be our all time favourite, a really magical performance. We went last summer as part of Leicester’s fabulous Spark Children’s Arts Festival with Torin (then 33 months) and Cora (8 months).

The story is simple, Ben opens a present to find a penguin inside. He’s thrilled until he realises the penguin doesn’t speak. He tries everything to try and get him to open up, from prodding and blowing raspberries to firing him into outer space. Like all good books, of course there’s a happy ending.

The show’s a mixture of puppets, projection and really cool music (by Tom Gray, formerly of indie rockers Gomez). A couple of extra characters have been added, including narrator ‘Larry Longnose’ who sets the scene. Torin was confused by this to start with, but soon got into the story when puppet Ben, who looks just like the original illustration, appeared. 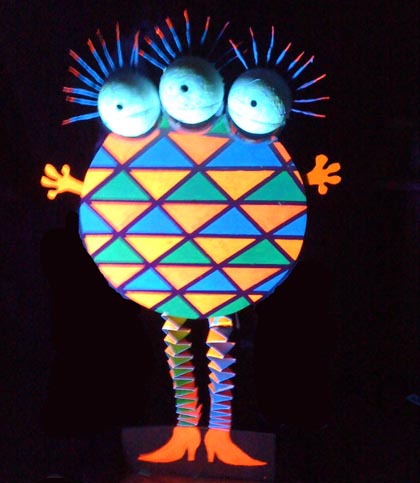 There are plenty of opportunities to shout along to the songs and join in tickling your grownup or blowing raspberries which Torin and even Cora loved. Extra scenes have been added to the book, including some fantastic 1970 style UV aliens. This was Torin’s first experience of puppets and he told me afterwards that he ‘really liked it when the man with the black top on took the alien’s eyes off and made them dance’.

Torin crept onto my knee towards the end of the show when the book’s famous blue lion appeared. Unlike the rest of the puppets who appeared on a tiered stage, this one got up close and personal to the audience which in our small venue proved a bit much for some of the younger children who thought they rather than Ben might be the ones to get eaten. I wont spoil the surprise, but be prepared if you have a nervous little one!

We had the chance to meet the puppets and the puppeteers afterwards, they had endless patience with children who wanted to get up close and stroke Penguin and poke Ben. Luckily it seemed like the lion had left the building.

This is a really short show, only 30 minutes or so, so although it’s recommended for 3s and up you might find your slightly younger child would enjoy it too, just watch out for that lion! IF you’re not familiar with the book you can buy it on Amazon and you can buy a CD of songs from the show, but be warned, should your child love it you might end up listening to it on repeat for almost a year…

Eve is Mama to Torin, 3 and Cora, 1. The whole family are big fans of children’s theatre and will be sharing their experiences in a series of guest reviews. She is a long time Bambino Goodies reader and blogs at Adventures of a Sleepless Toddler when she has time!