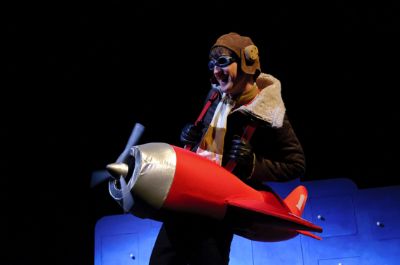 There are some stories I dread coming out of the bottom of the bookcase at bedtime, not so anything by Oliver Jeffers. Best known for his ‘Once there was a boy …’ series, the tales are gentle, accompanied by beautiful illustrations and perfect for getting Torin and Cora ready for bed.

We recently went to see Big Wooden Horse’s take on The Way Back Home. The book which recently got a popularity boost when Chris Evans announced it was son Noah’s favourite book on his BBC Radio 2 breakfast show. The story of a boy who finds himself marooned on the moon after an aeroplane malfunction is one of Torin’s absolute favourites too.

The set is less rather than more, consisting of bedroom furnitureÂ  painted with sky scenes, but none of the children sitting around us (small ones were encouraged to sit cross legged at the front for the best view) had trouble imagining the space scene. Torin was enthralled by the ‘real’ plane with propeller and lights that was part of the show. The real gem was the narrator-cum-martian though who after a song or two goes green and dons deely boppers to become the second character in the tale. Torin loved her, in fact we were surrounded by cackling children as she tried languages including dog barks, humming and squealing to communicate with her new friend. The show had plenty for parents to enjoy too, I loved the country-style song about engine mechanics which had very clever lyrics. Definitely worth deviating slightly from the plot for. 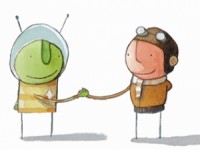 Check the Big Wooden Horse website for tour dates, The Way Back Home is travelling widely and currently has dates until October 2011.

If you love Oliver Jeffers see my theatre review of Lost and Found here.