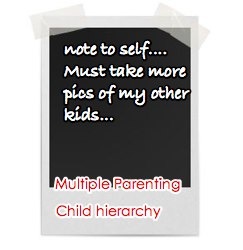 As a child I loved flicking through my parentâ€™s photo albums; laughing at the fashions of the sixties and marvelling at the wallpaper of the seventies. There were literally hundreds of snaps of a smiling baby dressed in orange and brown velour; my older sister, captured laughing, crying, eating, crayoning, dancing… Four years on, and photos of my own chubby cheeks are few and far between. My younger sister, born another four years after me, barely features at all.

I had imagined this wilful neglect to be peculiar to my own parents, and deeply resented the lack of interest in photographing my childhood. I now realise it is a trait common to many parents of several children and, as I glance through my own albums, I realise with shame that I have fallen into the same trap. My toddler is depicted from every angle, occupied by every conceivable activity and modelling a vast array of clothing. Photos of his sisters appear in bursts; dozens of pictures taken on one day, when I remember to dig out the camera and record the moment for posterity. This sporadic shooting is evident from the rapid growth evident between each batch of pictures, and the effect is not disimilar to flicking through a picture book out of which someone has ripped random pages, forcing the reader to jump forward several scenes at a time.

As my children grow it becomes ever clear to me how sibling hierarchy evolves; why first children are confident and independent, middle-children confused and resentful, youngest children slow to fly the nest. Not sixteen months when his sisters arrived, the Toddler was pushed to grow up, and expected to set an example when really he was just a baby himself. Already he appears older and more confident than those of his peers who have yet to acquire siblings. The age gap between his sisters is less text-book, however the seventeen minutes which give Twin One her senority status will no doubt be used to good effect when deciding who gets the top bunk on future holidays.

One is bossy, loud and demanding, constantly striving for attention and desperately jealous of her big brother. Two is sweet, gentle, quiet and kind, putting up with being ignored in favour of her more needy siblings. Once at a toddler group I accidentally left without her, and had to pretend I was putting the other two in the buggy before coming back for her and planting remorseful kisses on her accepting cheeks.

I wonder if one can fight against sibling hierarchy, or if it is pre-determined like the order of your birth? If I deliberately give less attention to One, treat the Toddler like a baby and force Two to stand on her own two feet, will the status quo be reversed? And yet I canâ€™t imagine doing that; already their characters are so entrenched, their position within the family so well-held. Something I can change though â€“ something I WILL change â€“ is the practical, tangible after-effects of sibling hierarchy.

I WILL fill out their baby books with the same dedication and accuracy with which I completed the Toddlers (â€˜started walking around your first birthdayâ€™ is simply not the same as â€˜took your first steps towards Mummy on Boxing Day 2006, recorded for posterity on DVD, Video and Blue Rayâ€™). I WILL take hundreds of photos of activities which may well have lost some novelty value for me right now, but which I will treasure when my girls are all grown up and Iâ€™m groping for the memory of the first time they fed themselves yoghurt. And beyond all of this, I will never ever have favourites. Well, not ones I admit to, anyway…