With the UK summer shaping up to be a scorcher and more and more parents deciding to take their offspring along to festivals rather than leave them with the grandparents, we thought it was about time we did a BG round-up of the most child-friendly options. We would have featured Green Man and Beautiful Days (both 20-22 August) and Bestival (9-12 September) as they’re consistently recommended for children, but they had all sold out at time of writing.

First up is arts-orientated Latitude in Suffolk’s Henham Park this weekend (15-18 July). The children’s arena has a vast array of activities from puppet shows to theatre, cookery, illustration and musical workshops or maybe even a pirate makeover. Learn circus skills, send a postcard from the Pixie Post Office, explore nature with the Suffolk Wildlife Trust or create massive models with the Woodcraft Folk that will take part in a parade. I particularly like the sound of the Parent & Baby Chill out Tent with its bedtime hour with baby bath facilities and a story session, accompanied a chill-out soundtrack. The Family Campsite offers play areas and free books to read in your tent. 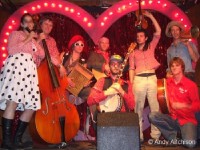 If you’re London-based or simply can’t cope with the idea of camping with little ones, on the same weekend (17 and 18 July) Stoke Newington’s Lollibop is for you. Aimed specifically at the under 10s, the Clissold Park-based event is headlined by comedian and expert storyteller Phil Kay with ample support from the fabulous hoe-down stylings of Cut a Shine, above. There will also be the world’s smallest nightclub, babyoke, the Lollipolympics, a mini zoo, trikes to get around on and even an Adult Creche (read purveyors of liquid refreshment) for thirsty mummies and daddies. 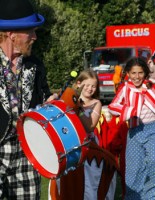 The following weekend (22-25 July) sees the Secret Garden Party land in Cambridgeshire with a bigger, better offering for ‘young gardeners’. Panic Circus, above, brings performance workshops and puppetry and little ones can enjoy a boogie at the fabulous Red Mutha’s kids rave (we went to one of Red’s dos in Brighton and Alfie loved it) – and don’t worry there’s not an annoying children’s song in sight! There’s an old-school sweet shop, a UV den (this sounds amazing), mind-boggling science experiments plus, of course, theatre, cinema, face painting and all the other things you expect.

The big one is Camp Bestival in Dorset (30 July to 1 August), proud owners of a clutch of awards for Best Family Festival and held at ‘the castle by the sea’, Lulworth in Dorset. With a 50s holiday-camp feel, Camp B was created by parents Rob and Josie Da Bank as a baby brother to the Isle of Wight’s wonderful Bestival in 2008, it boasts Mr Tumble and The Gruffalo as headliners alongside grown-up acts Friendly Fires and Madness. The children’s entertainment is too vast and varied to go into but bedtime storytelling sessions from Billy Bragg, a luxury nappy-changing garden and boutique babysitting are just a few of the treats on offer. Watch this space for our report from the festival. 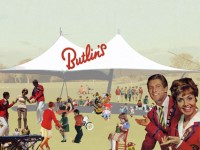 Croissant Neuf Summer Party (13th to 15th August) is always lauded as a great place for kids by parents in the know. The exact location is kept secret until you buy a ticket, but suffice to say it’s near Usk in Monmouthshire, Wales and has a huge kids’ zone with arts and circus activities, a dedicated area for toddlers, silly Olympics and a treasure hunt. On the same weekend, Wayne Hemingway‘s brand new Vintage at Goodwood has a Butlin’s complex complete with Red Coats and featuring Baby Loves Disco, wooden toy making, a petting zoo and a cinema showing vintage cartoons and films among its many delights.

Last up is the End of the Road festival (10 to 12 September) which traditionally closes the season in the lovely Larmer Tree Gardens in Dorset. There’s a long list of workshops, from clay making to drumming plus the chance to see Indian puppetry, play Scrabble or musical bingo and do yoga courtesy of Tatty Bumpkin. All children are given a wristband which you can write your mobile phone number on in case of emergency.

Stay tuned for our check-list of family festival essentials.