Ah, where to start? Fast becoming our favourite weekend of the year, Camp Bestival is the perfect way to kick off the summer holidays. When it coming to camping, location is everything. Last year, we seemed to be right at the furthest echelons of the campervan field, so for 2014 we decided to camp in Dorset the night before and get on site early to secure the perfect pitch. Of course, by the time we’d breakfasted, showered, packed up, stocked up and arrived it was nearly 1pm, but we still managed to find a brilliant spot, near the perimeter fence (you get a bit of extra space for table and chairs that way) and next to a fire lane. We also took a Coleman event shelter with us this year which was a great addition and meant we could sit outside while the children were in bed, no matter what the weather. Amazingly, our friends found us easily and we set up a little three bell tent, two campervan community. 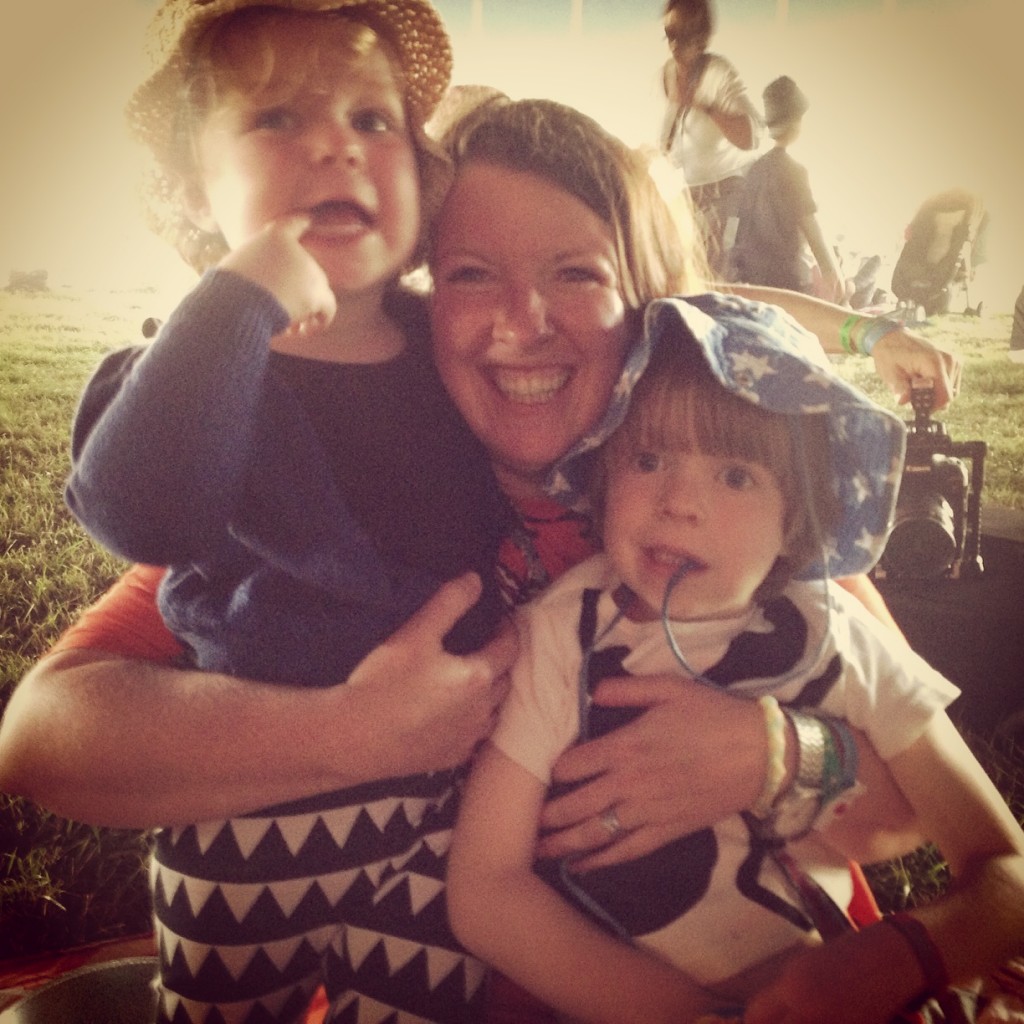 I had to finish my guide for parents for the Camp Besti Blog on the Thursday afternoon, so nipped to the press tent to use the WiFi. Lucky I did as we were invited to a secret supper club in The Feast Collective tent (closed to the public until Fri am) with Zoe’s Ghana Kitchen. It was a brilliant experience – Zoe was an attentive, entertaining host, we loved chatting and sharing with our fellow diners on the long tables and the food was amazing. I was really impressed that the children tried everything, although Kitty did keep shouting, ‘Spicy!’ before she went back in for another mouthful. We spent the rest of the evening with drinks in the Soul Park, watching Al Start (Alfie’s music teacher – how lucky?) perform on the Little Castle Stage and planning what we were going to do the following day. We managed to meet up with another group of friends which was an unexpected bonus. As darkness fell we headed back to camp for stories and cuddles.

FRIDAY
Dark clouds greeted us as we peeped out of the tent, but we weren’t going to let that stop us. We grabbed breakfast then loaded up our trusty Radio Flyer and trundled down to the festival. We had a sword-making workshop booked for the afternoon, so we decided to go and explore the Kids’ Gardens in the morning. Alfie’s not a fan of face-painting, but his friend Matilda popped in to Nam Nams‘ tent for one of her incredibly intricate designs, then we lunched at The Feast Collective, popped to see Al’s second show in the Big Top, then it was off to Spinney Hollow for swords. It’s the first time we’ve managed to secure a place and it was fantastic (I can totally understand why people queue for ages to book). Alfie and Matilda chose a piece of wood and a style (both went for knight), then they were shown how to shape and smooth it using traditional woodworking tools before they added a handle and bound it with rope. Finally, they were knighted in a ceremony where they had to promise they would only use their swords for good. A thoroughly enjoyable hour for everyone.

We then moved next door to The Badger Press to make letterpress prints. The children chose what they wanted to say (Alfie: Everything is Awesome, Matilda: Let it Go) and the printers helped them arrange the type before they rolled on the ink, then revealed the print – a really great memento to take home from the festival and not too pricey with three prints for £5. Next up was Caravanserai (awesome new area featuring old caravans and waltzers to sit in, designed by Monsieur Bateman) for adult refreshments, then to the playground in The Dingly Dell, via Project Wild Thing, which was an incredible area of outdoor crafts and messy activities. We hopped over the The Guardian Literary Institute in the evening for the dulcet tones of Howard Marks reading Charlie & The Chocolate Factory, but had underestimated how popular it would be – standing (outside the tent) room only. We caught The Cuban Brothers and Johnny Marr on the main stage (both ace in very different ways), but two tired children showing no sign of sleeping in the cart meant we headed back to listen to James from our camp on the hill. 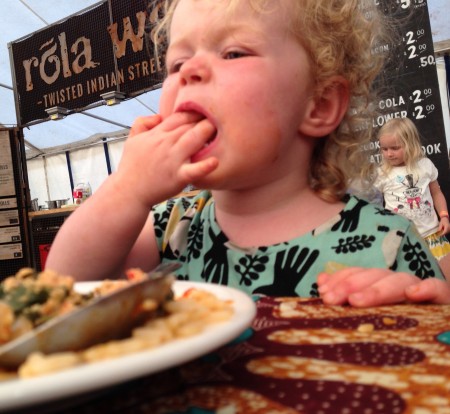 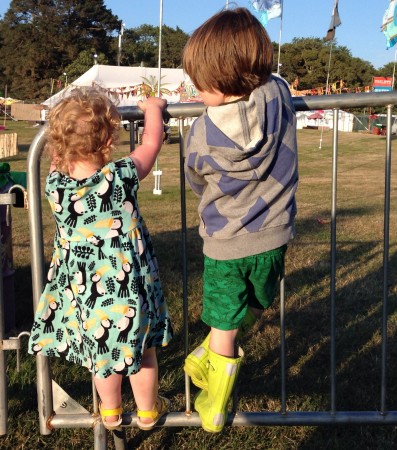 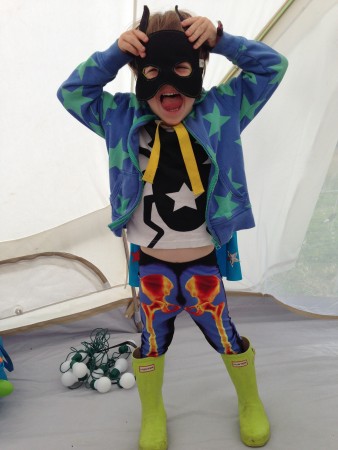 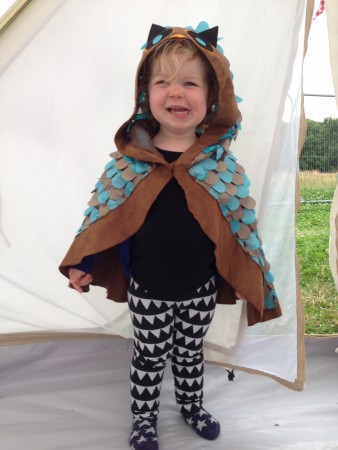 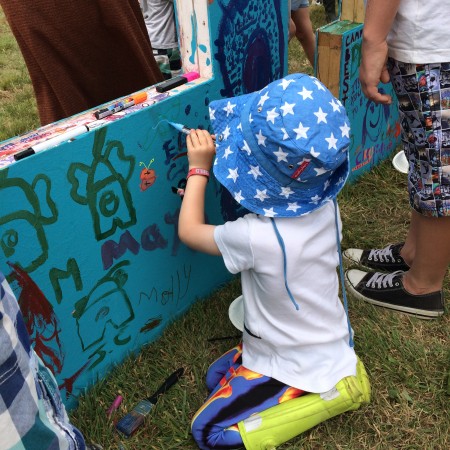 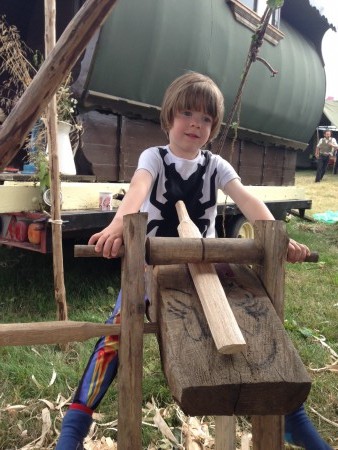 Making a sword at Spinney Hollow 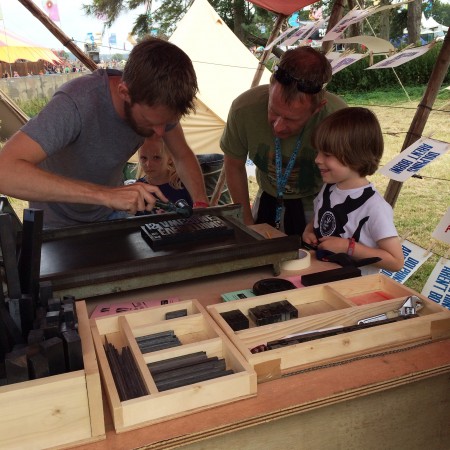 Printing with The Badger Press 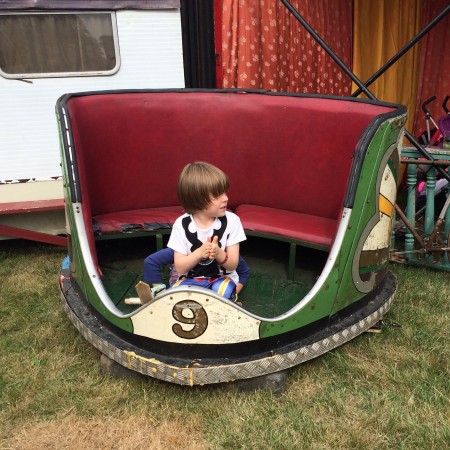 SATURDAY
Yay – the sun definitely had his hat on, so we donned our circus fancy dress and set off. We skipped Tumblemania this year in favour of a relatively quiet trip to the Lower Kids’ Garden (top tip: this is the time to avoid queues, although we still weren’t early enough to make it into the Lego Imagination Factory!), followed by a picnic lunch in front of one of our CB favourites – the Kawa Circus from Rajasthan – in the Upper Kids’ Garden, with coffee courtesy of Brighton-based Small Batch, then a few games with circus toys outside Big Top Mania.

The National Trust‘s 50 Things Meadow was a new addition this year and we spent a very pleasant couple of hours building dens, rolling down hills and generally immersing ourselves in nature, while listening to the strains of the Jaipur Brass Band on the Castle Stage. Unfortunately, we missed out on the tree climbing as it was fully booked, but the little ones were soon placated with a Yummy Lolly.

Late afternoon we set up base by the bandstand for our annual helping of Howard Marks reading fairy tales while we sipped Pimms. Then another delicious tea came in the form of rotis from Rola Wala and a vegetable platter from Milgi before we established a base for the evening towards the back of the Castle Field. That was our pretty much our HQ for the weekend – we had quite a few friends camping in different fields so we established Monsieur Bateman’s amazing sculptural climbing frame made from Citroen vans and old bicycles (which the children adored playing in) as a meeting point. De La Soul were ace and we trekked home happily, stopping for marshmallow-laden hot chocolate on the way. 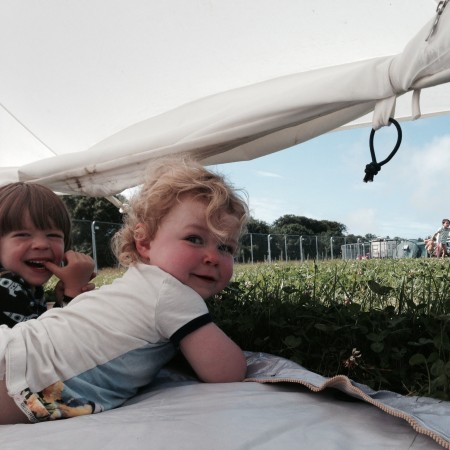 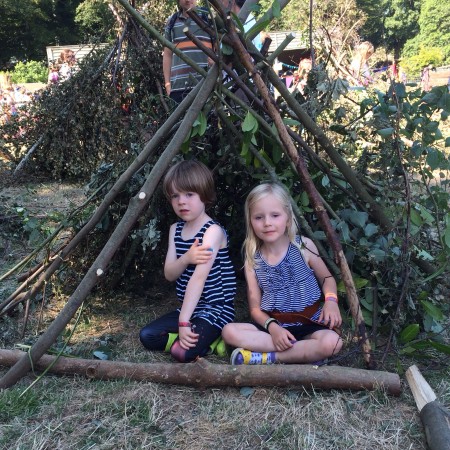 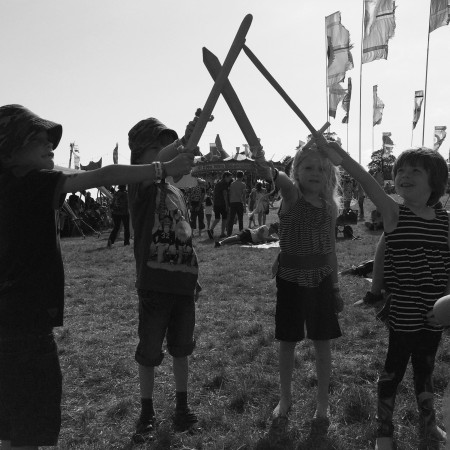 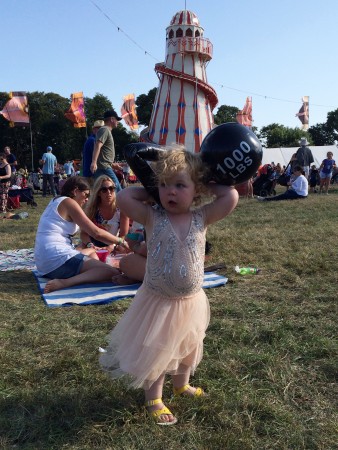 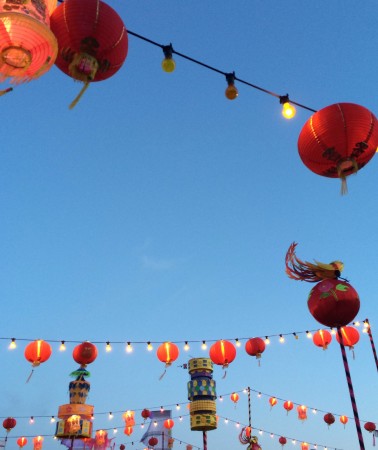 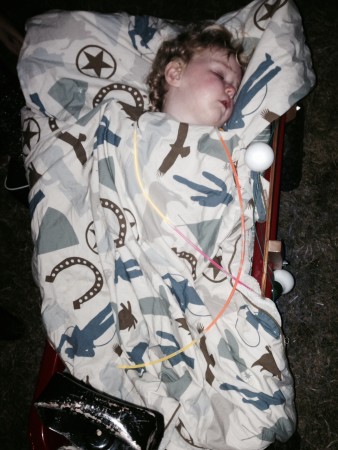 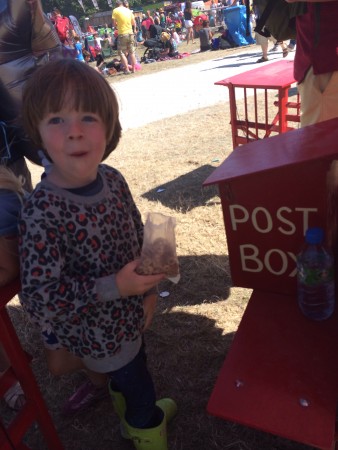 Sending a postcard to his cousins 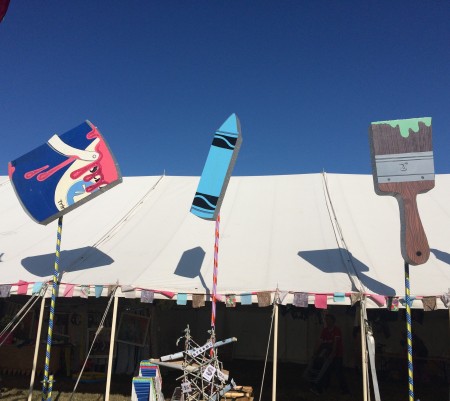 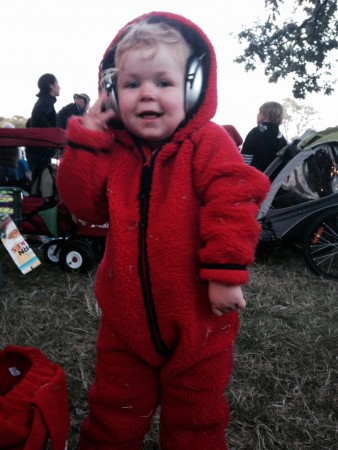 SUNDAY
We combined leisurely coffees and milkshakes with a bit of ceilidh-dancing to Cut-a-Shine then dosey doed to the Science Tent for electro dough play with the fab folk from Technology Will Save Us. We watched the ever-popular Insect Circus, constructed amazing Duplo creations and Kitty and her friend Florence played with ‘paint-infused’ water in the paddling pools in Art Town. We spent the afternoon lounging and pottering near the castle – sending postcards, snacking on Bear nibbles, browsing the clothes in Me & I, eating, drinking and dancing (well, Kitty was) to Chas ‘n’ Dave.

The children enjoyed pasta or fish and chips in the Kids’ Kitchen for tea (although it was a little disorganised). One group of friends left early evening, but we went to check out Milton Jones in the Big Top (genius) before setting up ready for the big finale of Basement Jaxx and firework display, via Josie Da Bank’s Jam Jar Bar for cocktails (yum!). Basement Jaxx were great and the fireworks were incredible. The children must have been tired though as they were both asleep just before or as the fireworks started – and they were loud!

All in all, Camp Bestival just seems to get better and better. They really take suggestions for improvements on board (there were more showers and toilets in the campervan field and an extra baby changing tent this year). Although there was a mix-up with the pitches in camping plus and I heard some people complaining about the toilets (I hear this every year), I actually thought they were pretty good – I tend to only use the compost ones while on the festival site though and they are generally cleaner. The food was definitely outstanding this year, particularly The Feast Collective tent. My only slight disappointment was the omission of the projections onto the castle during the finale fireworks, as the films are always absolutely enchanting. I’m also annoyed that I didn’t manage to get to the Camp Spa, but that’s not Camp Bestival’s fault!

Early bird tickets for next year’s extravaganza are now sold out, but you can still sign up for the payment plan to ease the financial burden. I really cannot recommend it enough. Everyone I’ve persuaded to come has continued to go every year and if that’s not an endorsement I don’t know what is.