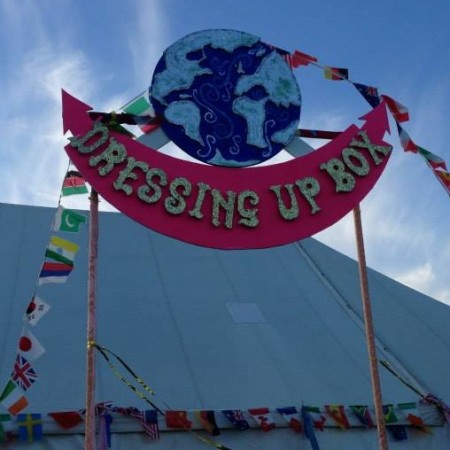 Who doesn't love dressing up? 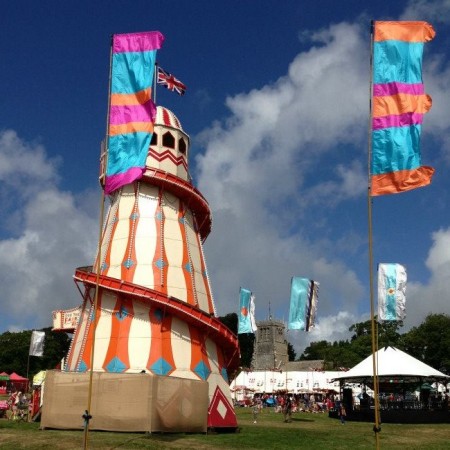 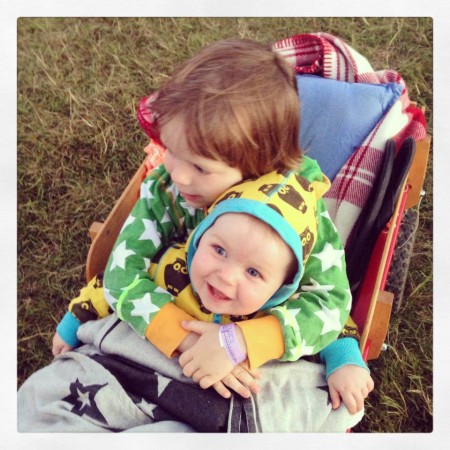 A cart is essential 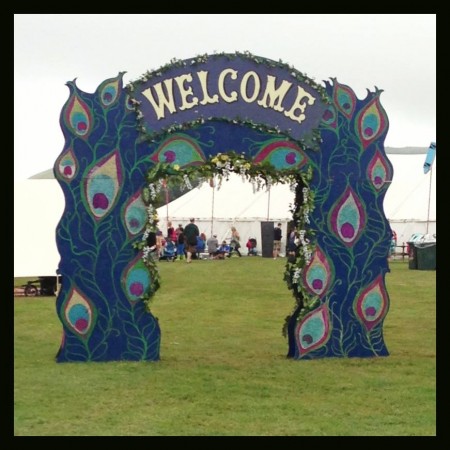 So, 2013 marked the fourth trip to Camp Bestival for Harry, Alfie and myself and the second for Kitty, who was just five weeks old at last year’s event. We had a new addition this year, too – a fabulous Pukka Tents bell tent, a birthday present from my wonderful friends and family, which definitely made the whole experience a lot easier (and more glam, of course). We also had a gang of chums there and my friend Boris made an amazing film of Alfie, Kitty and their two girls, Matilda and Florence, which you can see below. Of course, all the BG gang – Nat, Claire and Kate and families – were there as well.

So, how was it for us? Well, as always, we had an absolute ball. We arrived on Thursday afternoon and the campervan field was heaving, but we got a pitch roomy enough for the camper and bell tent, which took minutes to put up. There’s no entertainment as such on the Thursday night, but we loaded up the Radio Flyer and headed into the festival site (yes, it is a bit of a hilly trek, but you need exercise to compensate for all the ice cream). The atmosphere was already brilliant – loads of people out and about and the Magic Meadow and Soul Park were open for food and drinks. We traipsed up to Camping Plus to hang out with our friends, then tucked the children back in the wagon and wended our way home. Of course, neither of them went to sleep on the way back. Much. Too. Excited.

We started Friday by rushing to sign up for the sword, wand and pirate boat-making classes, but, frustratingly, within half an hour of opening they were all already fully booked for the whole weekend. This is one glitch that annoys me every year – the workshops are obviously hugely popular, so why not get more people in? Undeterred we made for the Big Top and Erth’s Dinosaur Zoo, which was a spectacular show of dinosaur puppets all the way from Australia. Alfie loved the smaller ones, but was keen to make an exit when the larger creatures were on the prowl, so we headed for the Dingly Dell to make fairy (or, in Alfie’s case, alien) houses from twigs, ferns and fairy dust (intergalactic glitter) which was great fun. I love the Dell – there are tons of creative things going on and the Fire Trail after dark was stunning. In fact, the whole festival site seemed better looking this year – the flags and arches were particularly beautiful. From there the Lower Kids’ Garden called – Alfie and Matilda were entranced by the Insect Circus so we camped out in front for a while, then generally bimbled about. We had tea at the Kids’ Kitchen, run by Charlie Bigham’s where the children had macaroni cheese or fish pie. Both were tasty but, in my opinion, much too salty for little ones. Good atmosphere though and the kids loved the Ikea rockers and stools. Nearly as much as they loved the inflatable in the Upper Kids’ Garden. In the evening we based ourselves at the back of the Castle Stage for Billy Bragg and Richard Hawley, but Kitty went to sleep in the wrap so she and I wandered over to the Big Top for punk poet John Cooper Clarke, who was as joyfully eccentrically marvellous as I’d expected. 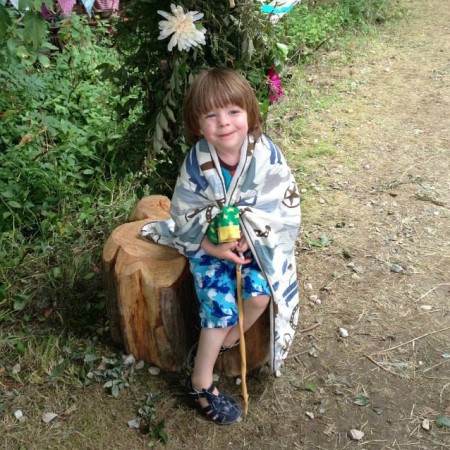 Twiglets woodcraft in the Dingly Dell 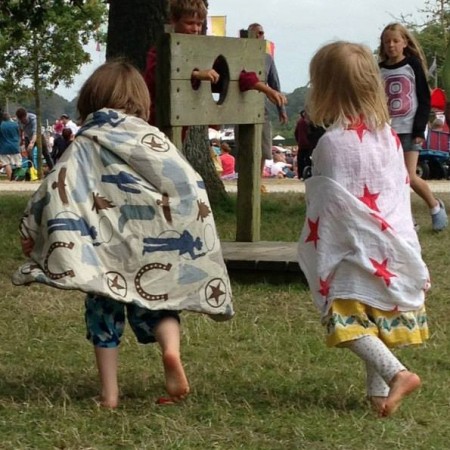 Capes by DwellStudio and Aden & Anais 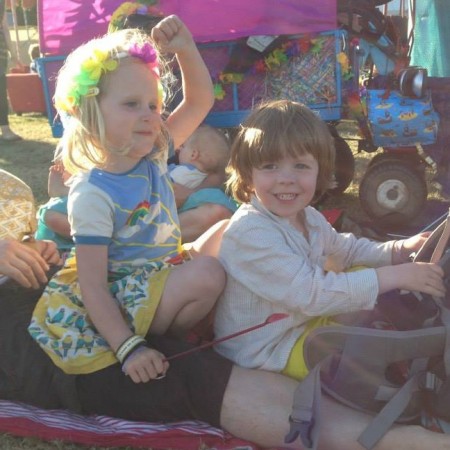 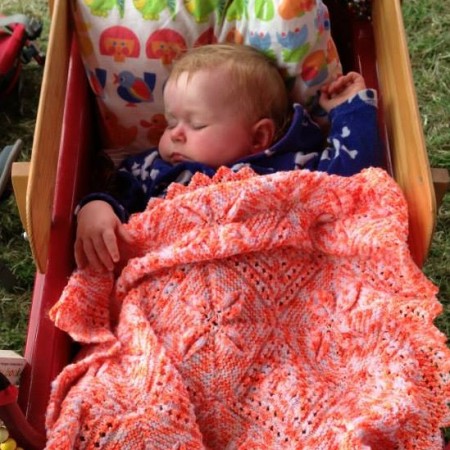 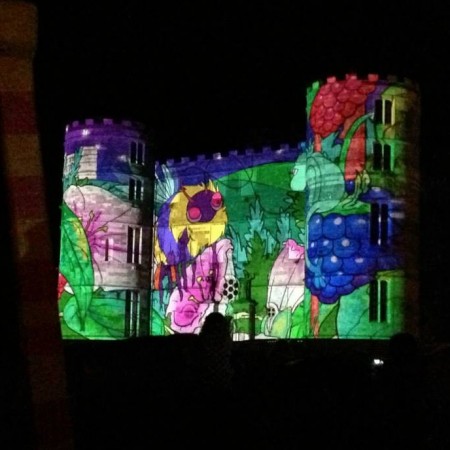 Saturday is dressing up day and as the theme was Around the World we pimped our wagon with sparkly Indian fabric and bells, threw on saris and bangles from student days and hit the road. First stop, Castle Stage for the inimitable Mr Tumble and once again, the mania was beyond belief. Tumble himself always seems rather overwhelmed by the reaction. Alfie, ever contrary, is underwhelmed by Mr T, but loved the schoolboy humour of Dick and Dom on Sunday. The Science Tent was new this year in the Lower Kids’ Garden and proved a big hit, especially the slime workshop, which kept the four year olds entertained for ages. The art tent had expanded to become Art Town and was the scene of all manner of marvellous creations, from flags and hot air balloons to a full-size Chitty Chitty Bang Bang. We popped in on our chums Sisters Guild, watched the Dance Space performances (our littlies were too little to join in) and marvelled at the acrobatics of the Black Eagles Circus. Lunch was in the YBF (Young British Foodies) tent where everything was delicious, although Rota Wala’s filled naans were the winners of our poll. Saturday early evening is probably my favourite time at CB, because it heralds Howard Marks’s bedtime stories, which you’ll have seen in the video. I don’t know whether it’s because he sounds a bit like my dad, but I find his voice incredibly relaxing, more so when accompanied by a few Pimms! We decided to head back to camp for bedtime as we’d seen headliners The Levellers before (they’re from just down the road in Brighton) and we had a couple of tired children on our hands.

Sunday kicked off with coffee, the papers and Kawa Circus in the Upper Kids’ Garden – mind-bending and death-defying feats performed with humour and panache by a Rajasthani troupe. Skinny Lister on the Castle Stage were a real highlight – they had everyone up and dancing and Alfie’s new favourite song is their version of John Kanaka. He and Matilda fashioned capes from a DwellStudio blanket and Aden & Anais muslin and proclaimed themselves Cowboy Man and Starlady before casting spells on everyone with their new wooden wands. The jousting was as noisy and spectacular as ever, as were the gravity-defying tricks at the Freestyle Sports Park. We chilled out in the Soul Park, had more coffee in the Pod Cafe, watched falconry and had Wagamama noodles for tea. Then it was time to walk back to the main stage for DJ Fresh and Labrinth with another group of friends. Kitty and I did the Fire Trail (Magical Menagerie‘s quirky creations accompanied by Gideon Reeling’s audio, culminating in a shadow puppet play) in the Dingly Dell (to try and get her to sleep – no chance, it was too eye-catching) then she snoozed in the cart with ear defenders on while we all watched BrightonArt, Chroma Collective and Two Tigers Fireworks’ animation and pyrotechnic extravaganza goggle eyed. We popped a sleepy Alfie in next to Kitty and made our way back to camp for the last time.

There’s been a lot of talk about toilets and showers and yes, more of both would be handy, but, at the end of the day, it’s a festival and, believe me, as festivals go, the toilets are pretty good – the compost loos are a great idea and there were even pay-as-you-go posh flushing toilets this year for those who really can’t deal with a Portaloo. It’s a hilly site, so decent shoes and a wagon for the kids are essentials. As are ear defenders – some areas are really loud. My advice is to pack and take everything you’re going to need for the day, so you don’t have to do the trek more than once. My only personal gripes are that the Baby Chill Out should be further from the Castle Stage as it’s very noisy and there should be more woodcraft workshops to avoid disappointed faces. We spent a lot of the weekend in the Lower Kids Garden, so didn’t get to see any comedy and I’d have like to have caught a couple of the talks in the Guardian tent, but I think we did pretty well considering we have two small children and they definitely did everything they wanted to. Basically, if you want to guarantee your offspring (of any age) a weekend that will blow their minds and that they’ll talk about for months, book your early bird ticket for 2014 now. Just magical. Well done, Da Banks – can’t wait to see what next year brings.