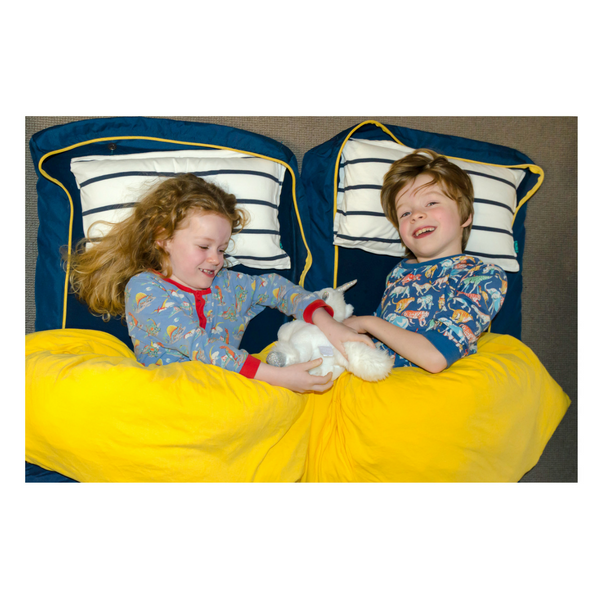 I’m rarely happier than when sleeping under canvas (provided that canvas is our much-loved bell tent, of course) and we’ve built up a pretty comprehensive collection of cool camping gear over the years. We’ve just added these brilliant Bundle Beds to our arsenal – they are essentially a 21st-century reboot of the 70s roll-out bed, comprising self-inflating mattress, sheet, 15 tog duvet cover and pillowcase in a nylon cover. They’re the brainchild of friends James and Lucy who were looking for truly portable, comfortable camping bedding and found it didn’t really exist. When we go camping our car is packed to the rafters and it’s the bedding that takes up the most room – it’s also easy to forget the odd pillow or blanket (as we have done many times). What I love about these it that they’re an all-in-one solution, so as long as you’ve got a Bundle Bed per child, you don’t need anything else. The strap also makes them much easier to transport, so they’ll be fantastic for festivals, hopefully reducing the number of journeys to and from the car we have to do with the trolley. The self-inflating valve also removes the need to pump up airbeds (which, it has to be said, is one of my most hated camping jobs). 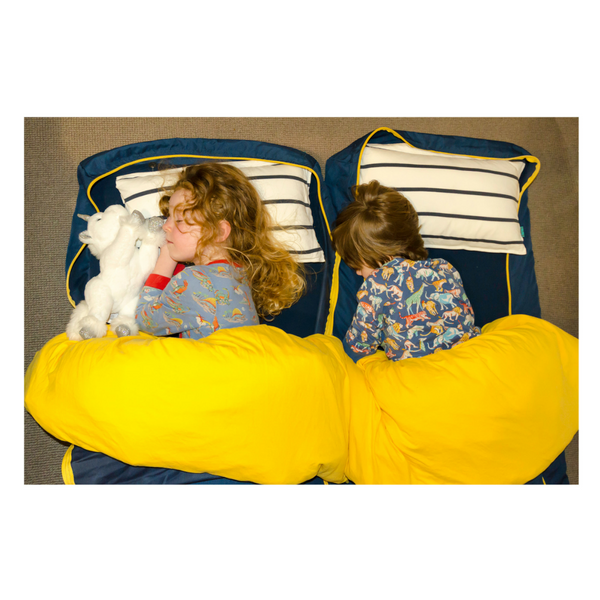 They seem really cosy with the brushed cotton bedding and the option to keep the cover zipped up like an outer sleeping bag. I thought they’d be annoying to roll away, but it’s just a case of opening the valve, rolling and securing the clips. I also adore the popping colour combos (we reviewed the navy and yellow, but Alfie and Kitty chose grey/teal and grey/coral when we bought them) that will look great in the bell tent. And it’s all washable. Needless to say, the children absolutely love them – in fact, the one downside is that they always want to have ‘sleepovers’ in each other’s rooms now because they are so keen to use their beds. Talking of sleepovers, they are going to do double duty for these as well – hopefully meaning less faffing around searching for spare duvets while the children run riot. Now for the bad news, they are are £199.99. Yes, I know what you’re going to say (we raised the money for ours by selling off old camping equipment), but they are great quality and should stand the test of time – when you add up the number of inflatable mattresses you get through, plus the cost of a sleeping bag and extra blankets, it’s not far off. If you do have the funds, I highly recommend.

Disclosure: we were lent two Bundle Beds to review – we’ve subsequently bought two. Which is probably all you need to know!